The latest meeting between Russian and Turkish leaders in Moscow indicates Ankara is poised to escalate tensions by rebuffing US threats over F-35 jets. 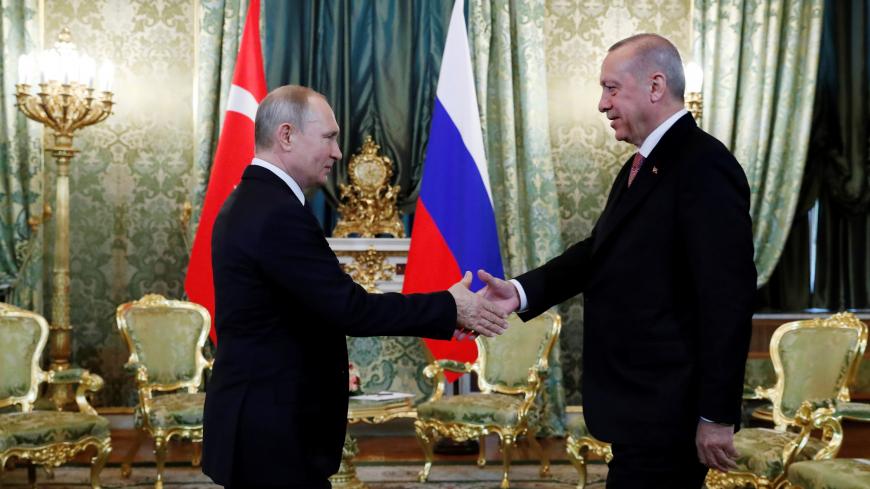 If Turkish President Recep Tayyip Erdogan buys Russia's missile-defense product, Washington won't sell Ankara the F-35 jets Erdogan wants. But Ankara has two means of leverage at hand: First, it can look for an alternative to the F-35s; and second, it can scare up some hysteria by allowing a Russian naval presence on its Mediterranean coast.

Worrying reports from Washington came one right after the other following March 31 local elections in Turkey that sapped strength from Erdogan's Justice and Development Party. The Washington administration hardened its position regarding Ankara’s “done deal” narrative about buying the S-400 air defense systems from Russia, and Russia’s announcement that the systems will be delivered to Turkey in July — perhaps earlier.

The headline of an April 9 op-ed in the New York Times by four US senators succinctly summarized the rise in Washington's dominating attitude: "A U.S. Fighter Jet or a Russian Missile System. Not Both." Washington says Turkey's possession of both systems would give Russia access to US technology. The United States had offered to sell Turkey US Patriot missile systems in place of the S-400, but no deal was reached.

In a nutshell, the US has developed an anti-Turkey stance by threatening to remove Ankara from the multibillion-dollar F-35 program and also threatening to impose sanctions.

Ankara nevertheless appears determined to respond to these warnings with its own counterpoints and further escalate the current tensions.

Ankara's first message to Washington has been that Turkey isn't short of F-35 alternatives and won't hesitate to approach Russia to fill that need, too, if necessary.

This message has been sent via pro-government Turkish media; Yeni Safak daily reported March 29 that Turkey could up the ante by purchasing Su-35 or Su-57 warplanes from Russia instead of F-35s. Russia’s Sputnik news agency echoed that report, and added that Russia and Turkey could even manufacture a joint warplane.

Then, after Russian President Vladimir Putin met April 8 in Moscow with Erdogan, Putin said Russia could also deliver other sophisticated military products to Turkey. Many wondered if Putin was implying that Ankara had given up on F-35s and decided to turn to Moscow.

Was Moscow airing these proposals just to remind Ankara of its options and to strengthen Ankara’s hand against Washington — or was it truly serious? Well-informed sources in Ankara told Al-Monitor that Turkey is also interested in transferring technology for flight avionics, mission computers and ammunitions to develop its own plane.

“No doubt ... Turkey will be looking for alternatives to buy another plane. Two fifth-generation warplanes currently mass-produced in the world are the American F-22 and Chinese J-20. But both are banned from sales to other countries,” avionics expert Hakan Kilic told Al-Monitor. “Turkey needs 4++ [generation] planes and if a decision is made to buy them from Russia, many other products could be bought from Russia.”

In recent weeks there have been many media reports that Egypt is paying $2 billion for more than 20 Su-35s — Russia's most sophisticated warplane, with better maneuverability and more armament capacity than NATO-compatible planes. “Therefore, if Russia can sell its newest and most-sophisticated plane to Egypt, it can sell it also to Turkey,” Kilic added.

Not surprisingly, the United States also warned Egypt not to carry out the purchase.

The Su-57 had started out as a program for a fifth-generation Russian warplane. But for a plane to be recognized as fifth-generation, it has to be a stealth craft with low radar signature, and has to be network-centric with a low thermal signature. The Su-57 doesn’t meet these requirements.

According to Kilic, Moscow has its own reasons to avoid sharing such technology. “It could be wishful thinking that Russia would share the most advanced technology of its most sophisticated plane, the Su-57, with a NATO country,” he said. “Remember, some months ago the India-Russia joint Su-57 manufacturing project was terminated by India because Russia was not satisfactorily sharing its technology. India is now in the process of deciding [whether] to manufacture its own fifth-generation plane.”

Another development discussed at the Putin-Erdogan summit could take their countries' military ties to an upper level: adding a port to the Russian-built Akkuyu nuclear power station that is due to be completed in 2023.

One other possibility being talked up in Ankara’s political circles is to provide Russia with an anchorage base for a small naval force for safely removing nuclear waste from the power station. If this possibility becomes reality, the port adjacent to the Akkuyu nuclear facility could become the second Russian naval presence in the Eastern Mediterranean, after Syria's Tartus. The Akkuyu facility is some 230 kilometers (143 miles) from Incirlik Air Base, which is used by NATO.

This possibility could be another card Ankara could play against Washington and the Western security bloc. The Turkish navy, to ensure an appropriate presence in its naval jurisdiction areas and to contribute to naval security, has been conducting air and naval reconnaissance and surveillance missions as part of NATO’s Sea Guardian Patrols to detect and deter terror attacks. Rumors of a port construction at the Akkuyu nuclear station and deploying a Russian naval unit in that port may be interpreted as Ankara reconsidering its pro-NATO stance in the Eastern Mediterranean and preparing to adopt a more independent position.

Ankara is responding to recent US demands by becoming closer to Moscow, while opening to discussion the NATO air and sea missions Turkey had been conducting. Escalation of the S-400 and F-35 crises could well spill over to other areas. This means the deeply rooted security links between Turkey and the Western security bloc could well be eroding. No doubt this would please the Kremlin.