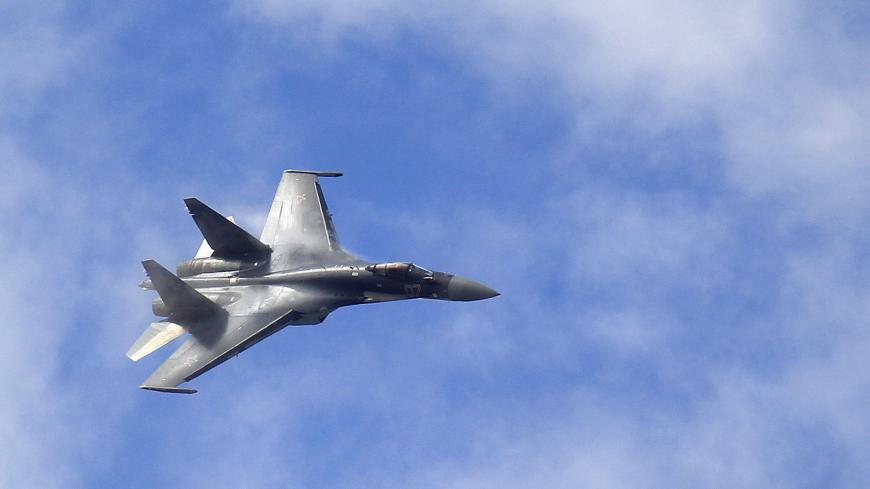 A Sukhoi su-35 fighter aircraft participates in a flying display during the 50th Paris Air Show at the Le Bourget airport near Paris, June 23, 2013. - REUTERS/Pascal Rossignol

Turkish-Russian relations are entering a new stage as they prepare to start joint patrols of a strip 10 kilometers (six miles) deep inside northeastern Syria Friday following Ankara’s incursion into the region this month to expel US-backed Kurdish forces.

While such sanctions have yet to be imposed on Turkey — partly due to resistance within the White House — the S-400 purchase did lead to Ankara’s expulsion from the Western bloc’s F-35 fight jet program. Though the Turkish state has already spent millions on the production and development of next-generation F-35 warplanes and the nation’s economy is expected to lose $9 billion due to its exclusion, NATO officials claim the move was necessary to safeguard the F-35's security features, which could be compromised if the jets were operated within the range of S-400 radars.

“Turkey wants to have an alternative in case it cannot acquire new F-16s and maintain its current fleet,” Ozgur Unluhisarcikli, director of the German Marshall Fund in Ankara, told Al-Monitor. “This should not be seen as a mere gesture, as the S-400 negotiations were seen. These negotiations fit a pattern in which Turkey turns to a welcoming Russia whenever it fails to get what it wants from the US.”

According to Turkey's state media, Ankara “is close to reaching a deal” to purchase 36 Su-35 warplanes, though other sources have reported the total may be up to 48. Each Russian jet is estimated to cost $50-70 million, significantly lower than the F-35 price tag of $94-122 million. Yet the savings play a small role, if any, in the ongoing negotiations, which Moscow-based analyst of Turkish-Russian relations Kerim Has described as “completely political.”

As tensions rise between Turkey and its traditional Western allies following the S-400 purchase and the latest Syria incursion, Has said Erdogan has come under pressure to balance his political interests by recalibrating relations with both NATO and Moscow. If Western support begins to waver for Erdogan’s administration, the Turkish leader will likely seek protection and reassurances through greater cooperation with Russia, Has said.

“It would be detrimental for NATO to have an ally like Turkey purchase Su-35s,” Has told Al-Monitor. “This would mean a 180-degree paradigm shift in Turkey’s security and threat perceptions and its historical geopolitical orientation.”

Though some political analysts have said Turkey’s ongoing pursuit of Russian military equipment could put the nation’s NATO membership at risk, Unluhisarcikli notes the coalition has no apparatus to expel member states.

“With these developments Turkey risks not being removed from NATO membership, as this is technically not possible, but being marginalized within NATO,” Unluhisarcikli told Al-Monitor. “In the future we could see Turkey being excluded from major NATO projects or exercises due to its defense cooperation with Russia.”

Erdogan is slated to visit Washington Nov. 13, and US Donald Trump may seek to repair strained relations by continuing to push for a US Patriot missile deal designed to dissuade Ankara from activating the S-400 — a move that could trigger a looming sanctions package. But following the US House of Representatives’ recognition of the 1915 Armenian massacres as genocide, speculation has grown over whether Erdogan will follow through on Trump’s invitation.

Apart from Turkey, state leaders in China, India and several other nations have expressed interest in Su-35 jets. Turkish Defense Minister Hulusi Akar has stated that reports of Turkey’s negotiations to purchase the warplane are false, but the idea has been floating around Ankara since Russian President Vladimir Putin first proposed a deal following Turkey’s expulsion from the F-35 program this summer.

During a visit to Moscow in August, Erdogan viewed a model of the Su-35 alongside Putin at the International Aviation and Space Salon show.

“Are we going to buy this one?” Erdogan asked the Russian leader, pointing at the jet.

“You can,” Putin responded before the pair shared a laugh.

Still, if negotiations proceed positively, Has said he does not expect concrete developments on Turkey’s possible Su-35 purchase before the spring of 2020. Turkish defense manufacturers are expected continue fulfilling production contracts under the F-35 program that are set to expire in March.

In addition, while some Turkish news sources have reported Ankara officials would seek technology transfers to pursue joint domestic production options with Russian defense manufacturers, Has said future deals on the Su-35 would likely exclude such options, as with the S-400 — for which Turkish officials also sought technology transfers without success. Air force pilots in Turkey would also require intensive training before operating the Russian warplanes.

For the time being, Erdogan is enjoying a boost in domestic support following the latest Syria incursion. As economic pains from the nation’s deepening debt crisis resurface in the news cycle and support dips once again, Has said Turkish leaders may seek to shift the blame for such troubles onto Western hostilities and looming sanctions, first for the S-400 purchase and later for any deal that may materialize regarding the Su-35 warplanes.

Erdogan “has to keep the appearance that the West is against him and Turkey,” Has told Al-Monitor. “He will put the responsibility of the deterioration of the Turkish economy on the Western pressure, which will create the pretext for a turn to Russia.”

He added that Erdogan might seek to “open a kind of corridor to walk away and to ensure some kind of support from the international arena.”