Turkey, US head to new crisis over Ankara’s S-400 purchase

Washington’s threats of dire consequences for Turkey if it goes ahead with the Russian air-defense deal are being disregarded by Ankara. 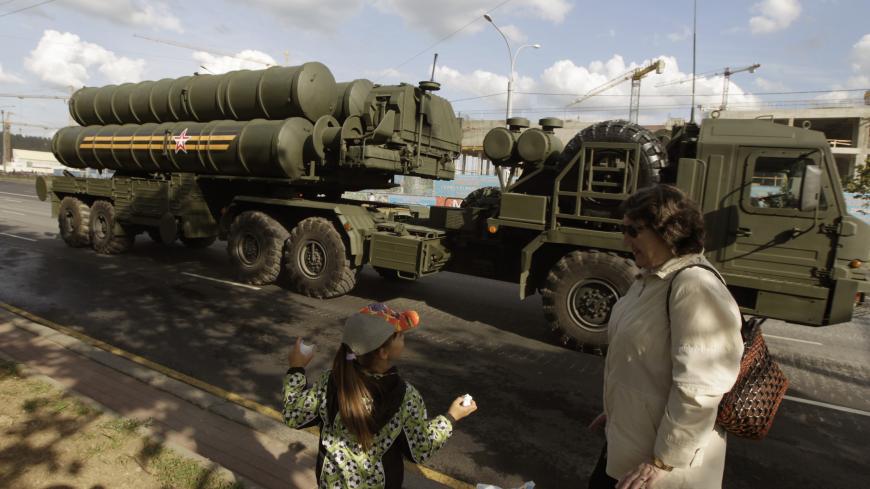 A Russian S-400 air-defense mobile missile-launching system takes part in a rehearsal for a military parade in Minsk, Belarus, June 26, 2014.

The standoff between Turkey and the United States over Ankara’s decision to purchase Russian S-400 missile-defense systems is coming to head and pointing to a fresh crisis in Turkish-US ties.

Many expect Turkey’s deployment of the S-400s to rekindle the debate on whether President Recep Tayyip Erdogan’s Turkey belongs in the Western alliance.

The ultimate decision on the S-400s rests with Erdogan, as the sole authority in Turkey today, and he appears determined to go ahead with the deal concluded with Russia and its president, Vladimir Putin.

“There is no point in discussing this anymore because we have concluded the deal with Mr. Putin and Russia,” Erdogan said in a jointly televised interview with Turkish channels last week.

“There is no turning back because such an immoral move would be unseemly. If we make an agreement, we stand by it,” he said.

His remarks also appeared to target the United States, which Ankara accuses of reneging on commitments to Turkey on many issues.

Meanwhile, Washington has started to underline that if Ankara goes ahead with the S-400 purchase, it will not get advanced F-35 fighter jets, and also lose its chance of purchasing Patriot anti-missile systems from the United States.

A day before Erdogan’s comments, Gen. Curtis Scaparrotti, who is NATO’s supreme allied commander and also commands US forces in Europe, told the Senate Armed Services Committee in Washington that the sale of F-35 jets to Turkey should be stopped if Ankara goes ahead with the S-400 deal.

Scaparrotti pointed out that the S-400s were not interoperable with NATO systems and would pose a problem for the security of the F-35.

“My best military advice would be that we don’t then follow through with the F-35 — flying it or working with an ally that is working with Russian systems, particularly air-defense systems, with one of our most advanced technological capabilities,” Scaparrotti said.

Vice President Mike Pence also issued a dire warning in February during the Munich Security Conference, saying the United States would not “stand idly by while NATO allies purchase weapons from our adversaries.”

Turkey is a program partner in the F-35 project and plans to purchase 100 of the jets. Lockheed Martin, the projects prime contractor, has said, “Turkish industries are eligible to become suppliers to the global F-35 fleet for the life of the program.”

In an interview with editors from the official Anadolu Agency on March 7, Turkish Defense Minister Hulusi Akar underlined that Turkey had fulfilled its financial commitments to date regarding the F-35 program and said that its exclusion from the program would be “illegal and immoral.”

A few hours after Akar’s remarks, Pentagon spokesman Charles Summers repeated Washington’s position and warned Ankara of "grave consequences" if it insisted on the S-400 deal.

These consequences, he said, would include exclusion from the F-35 project and the acquisition of Patriot systems.

Ankara’s says it was forced to turn to Russia for the S-400s because of foot-dragging by Washington regarding the supply of Patriot systems to Turkey.

The Turkish side also argues that the S-400 is one of the best missile-defense systems available today, and stresses that Washington cannot prevent Ankara from meeting its security requirements as it sees fit.

Ankara also emphasizes that the deal with Russia involves joint production and technology transfer, which it says Washington has been reluctant to provide.

Bora Bayraktar, a foreign policy commentator for the Hurriyet Daily News, argued that there was no genuine effort by Washington to contribute to Turkey’s defense, “other than threats of not delivering the F-35 fighter jets whose production’s financial burden Turkey is sharing.”

“How can Turkey trust this supplier, who is threatening not to deliver F-35s, and buy Patriots after canceling its purchase of the Russian S-400s? The answer is clear: Turkey cannot trust and depend on the US under these circumstances,” Bayraktar wrote, echoing Ankara’s official thinking.

Fact and fable, however, have become mixed in this debate, especially with regard to the claim that the S-400 deal includes technology transfer to Turkey.

“This contract does not involve technology transfer. Turkey will need Moscow’s consent even for software modifications or additions. The system will come as a ‘closed box,’" Burak Bekdil, a Turkish defense industry expert, told Al-Monitor.

In his Diplomatic Opinion blog, retired Ambassador Ali Tuygan said that while Turkey may have a point with regard to the price and technology-transfer aspects of Western defense systems, “it is hard to imagine that Russia would be more generous towards Turkey in defense technology transfer than Ankara’s NATO allies.”

Sinan Ulgen, a visiting scholar at Carnegie Europe in Brussels, said the S-400 cannot be used as a missile-defense system by Turkey, because only a system that is integrated with NATO capabilities can be used as such.

“In that case, the S-400 must be evaluated as an air-defense system [against aircraft] and not as a missile-defense system,” Ulgen told the daily Haberturk in an interview.

Ulgen said that in an ideal world, Turkey should buy the S-400 for air defense and the Patriot for missile defense. Indicating, however, that there is no such ideal world, Ulgen said Turkey had to make its preferences according to the alliance it belongs to.

Retired Ambassador Yusuf Buluc, for his part, said the S-400s and the F-35 jets are mutually exclusive systems and added that the US threat to withhold the supply of the F-35 to Turkey is very real.

“It is unlikely that Washington will allow the F-35 to be deployed in Turkey when the S-400s' advanced capabilities included monitoring and gathering information about this state-of-the-art jet,” Buluc told Al-Monitor.

Many analysts say the S-400 deal has more to do with politics than strategic or military thinking.

Turkey will hold local elections in two weeks that Erdogan is desperate to win. He has been utilizing unrestrained nationalistic language to garner votes and has also been using the S-400 issue in this context.

Erdogan is also trying to present an image of defiantly standing up to US threats, which he undoubtedly assumes will go down well with Turkey's predominantly anti-American electorate.

The fear, however, is that this will undermine Ankara’s position in NATO and be detrimental to Turkey’s long-term security interests, as there is little chance that Turkey could enter into an alliance with Russia that could replicate the NATO one.

Hakan Aksay, an expert on Turkish-Russian ties, said Moscow sees Turkey as a partner of convenience rather than a potential strategic partner.

Aksay also doubts that the S-400 deal would involve technology transfer to Turkey because “the Russian side is also concerned that NATO will gain access to S-400 technology through Turkey.”

Aksay, basing his argument on commentary in the pro-government Russian media, said, “Putin’s Russia is not interested in seeing Erdogan’s Turkey as a close ally.”

“The Russian media underline that Turkey is a partner today, the emphasis being on ‘today,’ and argue that Ankara could change position in the future, because it has done so in the past, especially after Turkey downed a Russian fighter jet in 2015,” Aksay said on the T24 news portal he writes for.

Aksay said, “Russia sees Turkey as a country that has to remain in the Western alliance in order to help it destroy that alliance.”

He said he believes Putin could accept a decision by Turkey to cancel its S-400 order — regardless of the financial cost this may incur — if the Kremlin can get something in return from Ankara, especially in Syria.

Information supplied by Lockheed Martin, however, shows clearly that Turkey would be the bigger loser because “F-35 industrial opportunities for Turkish companies are expected to reach $12 billion.”

In addition, Turkey would have to find a replacement for the advanced F-35s it expects to purchase in order to provide for its security for decades to come.

In the end, Ankara may have merely replaced its dependence on the United States with a growing dependence on Russia, a country that it is also at odds with over issues of critical importance to it, most notably in Syria.