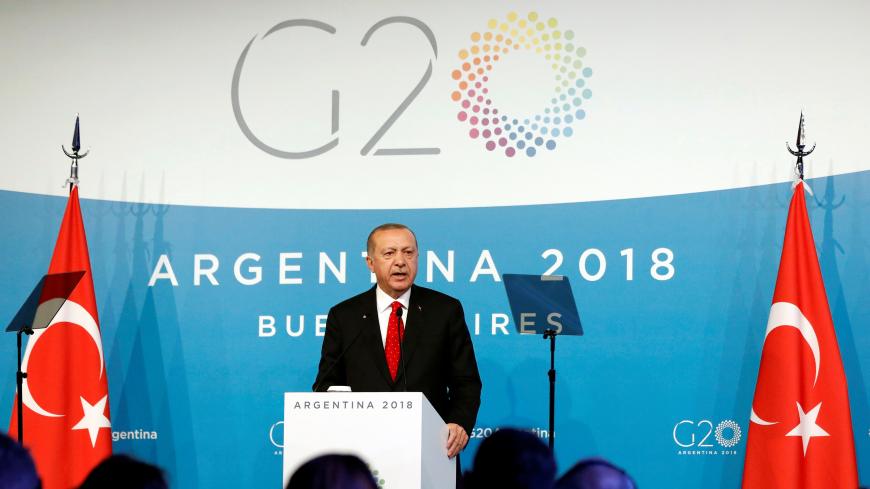 The official also said the letter is even “more menacing” than a letter sent from Washington to Ankara in 1964, the year that was marked by the greatest tensions between Turkey and the United States since the foundation of the modern Turkish republic.

Shanahan's letter lists concrete sanctions Turkey would face, including canceling the F-35 training program for Turkish pilots, banning Turkish officials from entering the F-35 program office as of July 31 and canceling purchases from Turkish companies as of 2020.

Turkey was not expecting such an ultimatum prior to the June 23 rerun election for mayor of Istanbul. The shock the letter created in the country can be easily seen through Ankara’s dayslong silence before deciding how to react. It has been almost a week since the Shanahan letter, sent June 6, was leaked to the media, and Ankara has just begun to speak up.

The language of the letter indicates that the United States has dismissed any halfway formulas as such allowing S-400s to come to Turkey but not be deployed or be deployed in a third country. In other words, with this letter the United States firmly demands cancellation of S-400 purchases to avoid the F-35 related sanctions.

A senior-level source in Ankara compared Shanahan’s letter to President Lyndon Johnson’s letter of March 16, 1964, to Turkish leader Ismet Inonu to deter Turkey from a militarily intervention in Cyprus.

“Shanahan’s letter incorporates more than the Johnson letter and was written in more a menacing manner,” the official told Al-Monitor. The official said that Shanahan deserves a reply, of course, but that Ankara has not yet made up its mind how to answer.

When asked why Ankara is delaying its response, this official referred to the Istanbul election do-over June 23, which has turned into a sort of confidence vote for President Recep Tayyip Erdogan.

Several options have been brought onto the table by the Turkish side to resolve the crisis. One of them was to transfer the S-400s to friendly countries such as Qatar or to form a technical committee to avoid having these “standalone” systems constitute a threat to NATO systems. Yet the letter shows none of these options have been accepted by the US side.

Also, Ankara had much confidence in President Donald Trump to manage the crisis, but this expectation also proved to be wrong. Ankara was truly hoping that Trump could persuade the Congress and the US security bureaucracy to act differently, but that did not materialize

Levent Ozgul, an Ankara-based defense analyst, said the letter points to the end of Ankara’s 6-year-old shuttle diplomacy between Russia and the United States, and that Ankara has to decide on a side by July.

“There is no doubt that the decision on the S-400 is not military but historical, economic and political,” Ozgul told Al-Monitor.

Ankara now thinks it has one last opportunity: the G-20 summit that will be held at Osaka, Japan, on June 28-29. Ankara hopes a Trump-Erdogan meeting at Osaka could be a way to overcome the crisis. There are even plans to enlist the support of India, which also risks being hit by the Countering America's Adversaries Through Sanctions Act (CAATSA). Intermediaries are working on a trilateral summit at Osaka.

However, time is not on Ankara’s side in this game. While the first batch of S-400s are to be delivered to Turkey in July, India’s deliveries are scheduled for 2020. Unlike Turkey, India has not made any payments yet. So India isn’t on the spot as much as Turkey is. India also is not a NATO member.

One is the July 31 deadline, and the other is that it declares some concrete sanctions are already in effect "and offers a road map of Turkey’s exclusion from the F-35 program,” Mevlutoglu told Al-Monitor.

Three possible scenarios can be considered about how the developments might unfold. First, Turkey could cancel the S-400 procurement outright. Yet both Ozgul and Mevlutoglu concurred that this is the most unlikely scenario. Mevlutoglu said a cancellation decision could only be possible in the event that a serious unexpected crisis erupts in Turkey-Russia ties.

A second option could be the delivery and activation of S-400s as agreed on previously. This scenario means Turkey’s exclusion from the F-35 program and implementation of CAATSA sanctions, suspension of provision of spare parts for Turkey’s mainly US-based equipment and weaponry; and terminating cooperation in military training and with Turkey’s defense industry. This scenario predicts Turkey would first sever ties with the United States because of the S-400 crisis and then with the Western security bloc. Here one also has to bear in mind that in this case the European countries and their relevant industries would hesitate to cooperate with Turkey. Mevlutoglu points to Germany, France and Italy as examples of countries that cut their defense cooperation with Russia as advised by the United States and France’s refusal to deliver two Mistral-class landing craft already paid for by Russia. This is an unlikely scenario, but one that Ankara cannot bear the economic consequences of.

Mevlutoglu said the most likely scenario could be a partial rupture in US-Turkey ties. Accordingly, the Russian missile system would be delivered and Turkey would face the first phase of sanctions from the US Congress. However, US-Turkey defense industry and military cooperation would continue in certain fields. To fill the gap created by Turkey's exclusion from the F-35 program, the United States could allow Turkey to purchase parts for the maintenance of the current inventory of F-16s and for their modernization with national means and even allow Turkey to buy secondhand F-16s. Thus Turkey could fly F-16s for another 15 to 20 years.

Ozgul points at another possible solution. “Turkish S-400 batteries may be located in Anapa, Russia [landfall of the TurkStream gas pipeline from Russia to Turkey] without any additional cost to protect TurkStream. Turkish observation staff may be assigned to Anapa. This does not impose any additional strategic disadvantages for parties,” Ozgul said. Ozgul pointed out that in January 2018, Turkey awarded the Franco-Italian Eurosam consortium a contract for the integration of Turkish Hisar missiles with the SAMP-T long-range air-missile defense system. The system is planned to be installed into Turkish destroyers. Ozgul added, "For urgent needs until this objective is achieved, Turkey leases some Aster 30 batteries from France and Italy, even some Patriot batteries from Spain.”

What is clear is that Ankara is paying special attention to the G-20 Summit and meetings there for a solution of the crisis. This is why the G-20 Summit may be considered to be the last stop before the train wreck of US-Turkey bilateral relations.