Despite the US announcement that Ankara will be excluded from the F-35 fighter jet program if it goes ahead with its purchase of a Russian missile system, Turkish officials continue to behave as if Washington is bluffing. 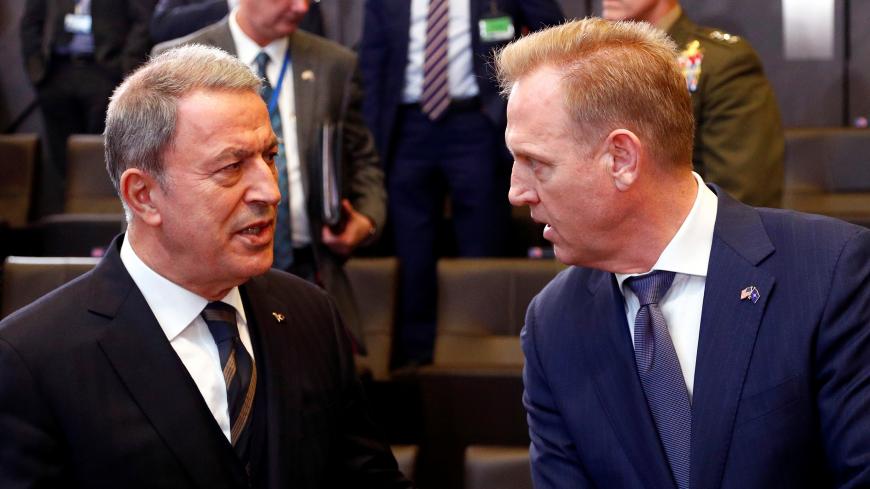 ANKARA — Turkey has responded to the United States’ throwing it out of the F-35 program with almost nonchalance.

US Acting Defense Secretary Patrick Shanahan had announced that Turkey would have to leave the program to build and buy the F-35 stealth fighter on July 31 unless Ankara canceled its purchase of Russian S-400 air defense missiles. The decision means Turkey will not only forfeit the four F-35s it has bought, but it will also lose billions of dollars in revenue for manufacturing components of the state-of-the-art aircraft. Turkish pilots and other personnel involved in the program will also have to leave the United States by the end of next month.

In a surprisingly calm response, Turkey’s Defense Ministry did not criticize Shanahan’s decision and pointed to his desire to resolve the issue amicably.

"A letter was sent by US Acting Secretary of Defense Patrick Shanahan to Turkish National Defense Minister Hulusi Akar,” the ministry stated Saturday. “Covering defense and security issues between the two countries, the letter expresses the expectation of finding a solution to the existing problems within the framework of strategic partnership and maintaining the comprehensive security cooperation and emphasizes the importance of continuing negotiations."

Washington has opposed Turkey’s acquisition of the S-400 missiles ever since Ankara announced its decision to buy them in 2017. The Russian weapon is not compatible with the air defense systems used by NATO countries. More importantly, the Pentagon believes the S-400 radar could hone in on the avionics of F-35 aircraft and spill the secrets of the stealth fighter’s capabilities.

US military generals have testified to Congress that Turkey should not receive the F-35 if it installs the S-400 system for fear that details of the aircraft’s technology would be leaked to the Russians. Washington has urged Turkey to buy its Patriot missiles instead of the S-400 and has made several offers to this effect.

But Ankara has spurned the Patriots as such a deal would not contain an element of technology transfer. Earlier this month, President Recep Tayyip Erdogan said Washington had not given Turkey an "offer as good as the S-400s."

Such was the US pressure on Ankara to cancel the Russian deal that many journalists believed ultimately it would. There is precedent. In 2013, Turkey ordered a Chinese missile system, but the purchase was opposed by fellow NATO countries and two years later Turkey canceled it.

However, Erdogan and other senior officials have repeatedly said the S-400 purchase is a “done deal.” When a foreign correspondent predicted Ankara would eventually reverse itself, the president’s director of communications rebuked him.

Turkey’s response to Shanahan indicates that Ankara still believes it can acquire both the F-35 and the S-400. The press quoted anonymous Turkish officials as saying that “some US institutions do not want to take into consideration” what Erdogan and President Donald Trump have agreed on. The officials were referring to reports that Trump and Erdogan agreed in a phone call to set up a joint commission to study how firewalls could be installed in Turkey’s S-400 system so that the secrets of the F-35 would not be jeopardized.

But the Pentagon’s undersecretary for acquisition has ruled that option out. “We are not going to discuss technical mitigations to the S-400,” Ellen Lord told the press on the day Shanahan’s letter was released.

Al-Monitor asked Sinan Ulgen, the head of the Centre for Economics and Foreign Policy Studies, why Turkish officials continue to behave as if Washington is bluffing.

“One reason is the mixed messaging of Washington,” Ulgen replied in an email from his think tank's Istanbul office.

“Unlike the rest of the US establishment, President Trump has seemingly not conveyed the seriousness of the situation directly to Erdogan. On the contrary, Trump seems to have insinuated all along that he could use his presidential prerogatives to prevent an escalation. Erdogan attaches less importance to messages conveyed by other pillars of the US administration.”

The United States is effectively telling Turkey, “You can buy the S-400 or the F-35, but not both.”

Ulgen believes Ankara will choose the S-400. “That is why there seems to be an increased interest in exploring other options with Russia, in particular the Su57 [fighter jet] as a potential replacement for the F-35,” he said.

Other defense experts approached by Al-Monitor refused to hazard a guess. But everyone agreed that ultimately the choice between S-400 and F-35 will be a political decision rather than a military one.

Ulgen said Erdogan was leaning toward Moscow rather than Washington because he has managed to work with President Vladimir Putin in Syria, where US support for a Kurdish militia linked to Kurdish insurgents in Turkey has been “very detrimental” to US-Turkish relations. In addition, “since the failed coup attempt of 2016, Putin has been a more reliable interlocutor for Erdogan than the White House.”

However, if Ankara does choose the Russian weapon over the American one, it could incur consequences more serious than being evicted from the F-35 program.

Shanahan warned in his letter, “There is strong bipartisan US Congressional determination to see CAATSA sanctions imposed on Turkey if Turkey acquires the S-400.”

Whatever penalties Congress may impose under the Countering America’s Adversaries Through Sanctions Act, the symbolism of any sanctions is likely to have a greater impact. If foreign investors see Ankara is in an economic confrontation with Washington, they will think twice about investing in Turkey and speculators will spurn the Turkish lira.

If Ankara proceeds with the S-400 and Congress imposes CAATSA sanctions, Turkey could suffer an economic crisis similar to that of last year, when Trump penalized Turkey for prosecuting the American pastor Andrew Brunson.