Pentagon holds out hope of salvaging military sales to Turkey

Acting Defense Secretary Patrick Shanahan said today that he expects the Pentagon to deliver the Patriot air defense system to Turkey even as Ankara eyes a fall installation date for the Russian S-400. 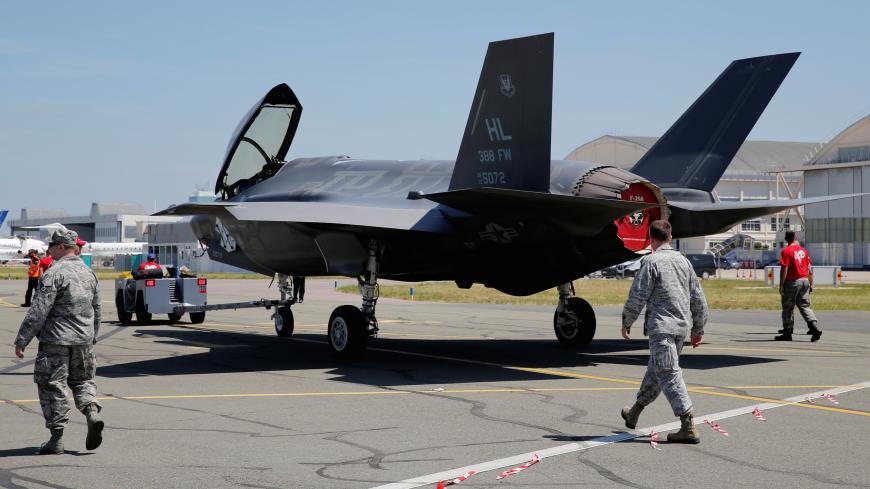 US airmen walk next to a Lockheed Martin F-35 Lightning II aircraft as it is moved on the eve of the 52nd Paris Air Show at Le Bourget Airport near Paris, France, June 18, 2017. - REUTERS/Pascal Rossignol

Acting Defense Secretary Patrick Shanahan said today that he expects to be able to salvage US military sales to Turkey that have been jeopardized by Ankara’s insistence on buying a Russian missile defense system.

The Pentagon announced Monday that it had suspended the delivery of parts for Turkey's F-35 jet program amid concerns that the Russians could use their S-400 to spy on the aircraft. Speaking to reporters at the Pentagon, Shanahan said he retained confidence that Turkey will ditch the Russian system and instead use the US Patriot air defense system, lifting any misgivings about transferring the F-35 to Turkey.

“I am very confident in the Patriot proposal that we've delivered to Turkey, its availability, its pricing, and very importantly, the industrial participation that comes along with the Patriot system,” Shanahan said. “I expect we'll solve the problem so that they have the right defense equipment in terms of Patriots and F-35s.”

The Pentagon also said today that it was looking for secondary sources for Turkish-produced parts for the F-35. Pentagon spokesman Charles Summers called the moves “prudent steps to protect the shared investments made in our critical technology.”

Ankara, for its part, insists the Russian purchase is a done deal.

“We concluded the S-400 issue, signed a deal with the Russians and will start co-production," President Recep Tayyip Erdogan said last month. "Later, we may work with [the next-generation] S-500s."

Turkey has insisted it will operate the S-400 as a standalone system and will not hook it up to the same network as the F-35. But US defense officials fear that Russian operators could train the S-400 radar on the aircraft, allowing them to better track it in combat.

“The radar is an electronic intelligence collection platform,” said Aaron Stein, director of the Foreign Policy Research Institute’s Middle East program. “It would store data on the F-35 just by its mere presence in Turkey, and then that data would be consistently updated by Russians who visit Turkey.”

The US Defense Department had planned to deliver the first two F-35 jets to Turkey in June, after Turkish pilots finish training on the fifth-generation aircraft at Luke Air Force Base in Arizona. But the Pentagon now is holding up delivery of US-made F-35 parts to Turkey.

The S-400 threat has led the Pentagon to accelerate plans to backfill Turkey’s role in building the fuselage and other parts for the jets over the past few months. A defense official told Al-Monitor that a classified report delivered to Congress in November listed several countries that could provide parts to replace the ones Turkey makes.

If Turkey goes ahead with its acquisition of the S-400, the United States would need to decide whether to buy back the two F-35 aircraft already purchased by Ankara and send Turkish pilots and maintenance workers training in the United States back to Turkey, the official said. In a letter to leading appropriators, House members called for fresh language last week restricting US funding to support the jets if Turkey buys the S-400.

As Shanahan has continued working the issue directly with Turkish Defense Minister Hulusi Akar, the Defense Department has opted to continue to offer a discount for the $3.5 billion Patriot system that Reuters reported was set to expire in March.

“March was not a hard and fast deadline,” a Defense Department spokesman told Al-Monitor. “We have flexibility.”

Another official said Turkey would also have the opportunity to have an effective air defense system until the batteries are delivered in 2024, but did not elaborate on what the United States would provide in the interim.

Yet even as the Trump administration has kept the option open for Turkey to buy the Patriot system, Ankara appears to be bucking the offer. Akar has indicated that Turkey’s S-400 site will be ready by October. And CNBC reported in September that Russia had begun constructing a site for its air defense system.

Losing the jets could come at an economic cost to Turkey. Eight Turkish companies are involved in supplying parts for the fighter jet, worth up to $12 billion in business, according to Lockheed Martin, the aircraft’s maker. The Turkish lira fell by 2% amid news of the US move to halt equipment deliveries and the ruling party’s setbacks in local elections.

But experts insist that the decision to buy the Russian system is political, not economic, driven by Erdogan’s winnowing circle of advisers and increasing closeness with Russia since a 2016 coup attempt.

“The Turks have made thus far a political decision that the immediate delivery of S-400 matters more to them than F-35,” said Stein. “The decision-making calculus in Turkey has narrowed considerably and they may not be fully aware of the consequences. Basically 99.9% of the meetings the US takes with the Turks on this issue don’t fundamentally matter because those people aren’t empowered to negotiate.”