Where will the S-400s be deployed?

Russian-made S-400 batteries are expected to arrive in Turkey before the end of July and be deployed in Ankara. 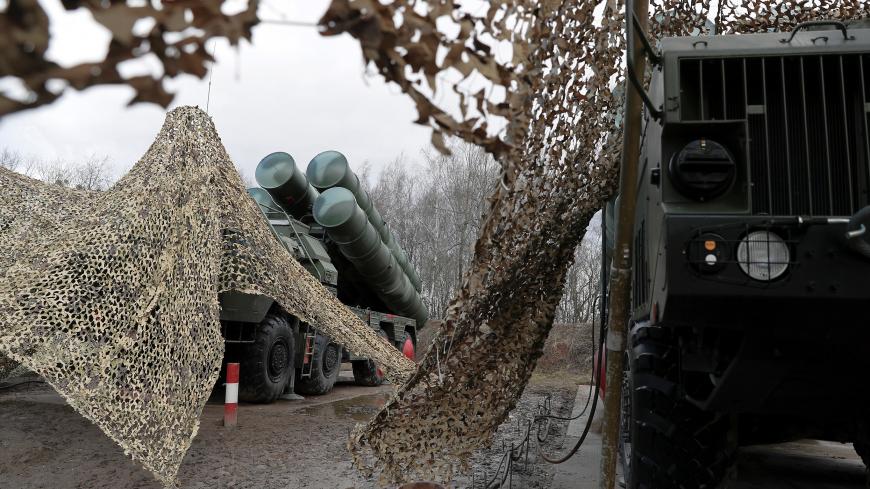 The last chance for Turkey and the United States to avoid a crisis over Turkey's purchase of a Russian missile system was during a meeting between Recep Tayyip Erdogan and Donald Trump at the G-20 summit in Japan. Now, that chance has passed.

The meeting made it clear that regardless of what the American side says, Turkey will receive the Russian-made systems. The first shipment of the S-400 batteries will arrive in Turkey by the end of July, and Turkey is now preparing itself for the impact of possible US sanctions, security sources told Al-Monitor.

After President Erdogan’s announcement, further confirmation came from presidential spokesman Ibrahim Kalin on July 4: “S-400s will be delivered very soon and will be actively used,” he said.

Security sources said that the first shipment will consist of nine transporter erector launchers (TELs), a long-range surveillance radar, target acquisition and engagement (fire control) radar systems, a command/control unit and additional fire-control radar system. This will be the first component of two battalions that will be delivered to Turkey.

In Ankara, the battery will be deployed at Akinci military base (newly named Murted) in the town of Kahramankazan in Ankara province, a security source told Al-Monitor on condition of anonymity. The base is suitable for the landing of Russian cargo planes that will make the deliveries.

However, the source also said that Ankara will not rush to install the S-400s and make them operational.

“We are expecting the S-400s to be operational this year,” Ismail Demir, the president of Turkey’s Defense Industries Directorate, told media July 4. In other words, Ankara is attempting to avoid further escalation with Washington over the matter.

Another issue to pay attention to: Who will command the S-400s — the Turkish military and air force, or a separate autonomous command?

However, initial plans indicate that the S-400s will be under the traditional command structure of the Turkish military. Turkey’s purchase of the S-400s, and its plans to deploy the batteries in Ankara, have resulted in speculation over whether President Erdogan bought the equipment “to defend his own palace.” By putting the batteries under the control of the Turkish army, such concerns would be defused.

Now that it's no longer a question of whether Turkey will scrap the S-400 deal, what's next? Is Washington going to slap sanctions on Turkey for purchasing advanced weaponry from Russia?

This discussion took off after Trump and Erdogan met in Osaka, dividing the Turkish public into two camps. The first camp, which includes pro-government circles, believes that Trump’s pleasant words in Osaka indicate the administration's reluctance to sanction Turkey. However, the opposite camp believes the pleasantries were part of a larger damage control strategy to save bilateral ties once sanctions are implemented.

In Turkey’s strategic thinking, the reality is between the two camps. According to information obtained by Al-Monitor, Turkey is expecting sanctions and bracing for the impact. However, Ankara expects these sanctions, which the Trump administration will choose from a menu, will be limited to Turkey’s exclusion from the F-35 program. Yet the sanctions will not affect other defense cooperation projects between the two countries, including electronic upgrades of F-16s and drones and procurement of accessories.

Since Ankara plans to install the batteries at the end of the year, this could spread the crisis out over time. However, Ankara might be mistaken in its expectations. Some members of the US Congress are displaying a certain amount of flexibility in terms of timing, but they are certain that sanctions will be imposed. Once the sanctions hit, the downward trend in bilateral relations may affect other ongoing cooperation projects.

One should closely monitor the Russian AN-124 cargo planes that will arrive in Ankara, particularly at the Akinci base. Those two Russian planes will likely be transporting historic cargo, vehicles, equipment and supplies of the first S-400 battery — a move that will affect relations between Turkey and the Western security bloc for years to come.