How Turkey is planning to handle US blowback over S-400s

Some parts of the Russian made S-400 missile system arrived in Ankara in the last several days, but none of the shipment included missiles. 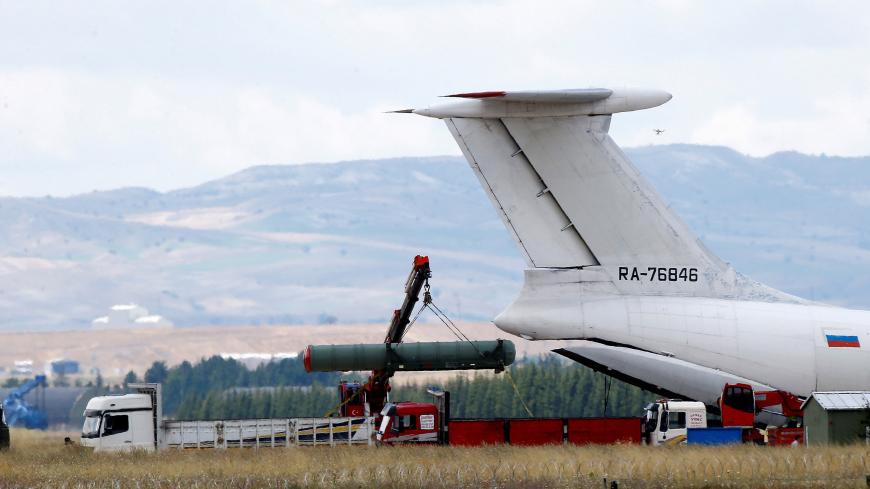 While Turkish President Recep Tayyip Erdogan has announced that the Russian-made S-400 missile system will be fully operational by April 2020, the first fleet of the S-400s is expected to be operational no later than November, security sources told Al-Monitor.

A number of S-400 system shipments made it to Turkey in recent days, and their contents may be providing important clues about how Ankara plans to handle possible US blowback over the S-400 deal.

On July 12, three Antonov An-124 cargo planes of the Russian air force landed at Ankara’s Murted Air Base with the first batch of S-400 components.

Turkey’s Defense Industries Management (SSB) issued a press release confirming the delivery, noting that it had signed an agreement with Russia's Rosoboronexport, which manufactures the S-400s.

In a separate statement, the Turkish Defense Ministry emphasized that the agreement with the Russian company was signed before Aug. 2, 2017, which is the day President Donald Trump signed the Countering America’s Adversaries Through Sanctions Act (CAATSA).

The Turkish delegation headed by Erdogan highlighted this point to their American counterparts in a recent meeting between the two sides in Osaka, Japan, a security source told Al-Monitor. According to the Turkish side, CAATSA cannot be used against Turkey since the deal had been announced before CAATSA was to enter into force, the source added.

The deal was finalized in December 2017 after having been in the works for a year, Reuters reported on Dec. 29, 2017.

This is the first time the public learned that the sales agreement for the S-400s was signed by SSB. Should Washington employ CAATSA against the delivery of S-400s, SSB, the main defense industry procurer for Turkey, would be directly affected. If that happens, the Turkish defense industry could experience severe procurement shortages for raw materials and intermediary products.

The landings of the Russian planes at Murted were covered live by Turkey’s news channels. Indeed, live coverage of the delivery was exceptional. It is hard to think of a single weapons delivery that was covered live on television over the last 20 years. This time, coverage that glued everyone to their TVs points to the political and psychological aspects of the occasion.

Russia's Defense Ministry expressed its pleasure about the sale of S-400s to a NATO member for the first time and the consequent growing prestige of the S-400 in global markets via a 6-minute video it released through its Twitter account.

A video released by Turkey’s state-owned Anadolu Agency shows the shipment consisted of radar vehicles and equipment for the first S-400 battery. The video shows two 5P85TE3 launcher carriers; these carry 48N6E series missiles with a 250-kilometer 155 mile-range. Contrary to general expectations, the launcher carriers for the 40N6E series, which have a 400-kilometer range, were not included in the shipment to Turkey.

Where are the missiles? According to Russia’s Tass news agency, 120 missiles will probably be delivered by sea over 12 months. A security source, confirming the Tass report, told Al-Monitor that first batch of missiles are set to be delivered to the port of Mersin in September. In January, Russia also transported by sea the S-400s bought by China.

According to a Turkish security source who didn’t want to be identified, the basic reason for Ankara to protract the deliveries is to gauge the reactions of Washington and manage the process accordingly.

Simply put, Ankara plans to get missiles in late September and fully activate the S-400 batteries at the end of the year, a kind of slow-motion activation that could spread the crisis out over the months to gain more time and manage Washington's responses with Trump's help.

As I noted in an earlier article, Ankara is counting heavily on Trump to limit restrictions on F-35 jets and to keep the CAATSA sanctions off Turkey. The answers most people are looking for are whether Trump entered into a commitment at Osaka, and, if he did, what he is going to get from Ankara.

What can Trump do for Turkey? He can delay the CAATSA process as much as possible to give time to Ankara, and also work to lighten possible sanctions.

Parallel to the S-400 deliveries, increasing military movements of the Turkish army in northeast Syria in areas opposite Turkey’s Suruc and Akcakale regions are attracting attention.

With these military moves, Ankara has been signaling to Washington that CAATSA sanctions could trigger a Turkish operation into northeast Syria.

On July 12, there was a phone call between Turkish Defense Minister Hulusi Akar and Acting US Defense Secretary Mark Esper on northeast Syria. According to the Turkish Defense Ministry, Akar told Esper, “The only military force that is ready, competent and appropriate for the establishment of a safe zone in northern Syria is the Turkish Armed Forces.” Akar reiterated that for Turkey, “protection of its borders and people was the priority, and in the face of intensive attacks from the Syrian border, Turkey would have to take necessary measures and would not allow terrorist groups to seek safe havens right across its borders,” the ministry said.

Akar and Esper also agreed that dialogue between the two countries should be maintained and that a US military delegation should urgently be dispatched to Ankara this week for further discussions on the safe zone in Syria, the statement added.

A visit to Ankara by a US delegation will therefore be of critical importance.

Meanwhile, the deliveries of S-400 long-range air and missile defense systems is continuing after the arrival of a fourth plane July 13, the Turkish Defense Ministry said July 14.

Fifth, sixth and seventh Russian planes were carrying critical parts such as radar equipment landed at Murted Airbase outside Ankara on July 14.

Later deliveries — a ninth Russian plane landed July 15 — also did not include missiles. However, missile launchers did appear in the July 15 shipment, indicating that the delivery process will be faster than most had expected. Still, missiles are not expected to make it to Turkey until September. The missiles will probably be shipped to Turkey via sea by the end of fall after the completion of the training process.