The US sanctions targeting Turkey’s defense industry agency may be seen as rather mild by some observers, but they threaten to deprive Turkey of key military technology should they last more than a year. 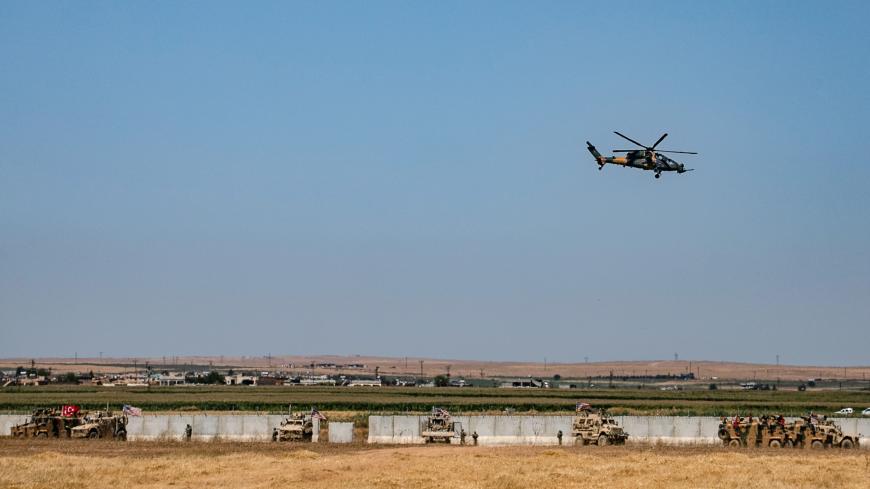 A Turkish T129 ATAK attack helicopter flies over US and Turkish military vehicles during a joint patrol in the Syrian village of al-Hashisha on the outskirts of Tell Abyad town along the border with Turkey, on Sept. 8, 2019. US objections to the export of US technology used in the T129 are already hurting Turkish military sales and new US sanctions on Turkey linked to Turkey's S-400 purchase seem likely to hurt the Turkish military industry even more. - DELIL SOULEIMAN/AFP via Getty Images

The new US sanctions against Turkey over its purchase of Russian air defense systems stand to inflict heavy damage on the flourishing Turkish defense industry unless Ankara moves to compromise with Washington to limit the duration and impact of the penalties.

The sanctions, based on the Countering America's Adversaries Through Sanctions Act (CAATSA), were announced Dec. 14, more than a year after Turkey took delivery of the S-400 systems from Russia. President Donald Trump — long under fire for going easy on his Turkish counterpart Recep Tayyip Erdogan — actually surprised Ankara by greenlighting the sanctions weeks before his term expires.

The decision made Turkey the first NATO ally to face sanctions under CAATSA and the second country after China to be penalized for purchasing the S-400s, sending a strong signal to other countries that have shown interest in the S-400s such as India and Qatar. Secretary of State Mike Pompeo said Washington has demonstrated its resolve to “fully implement CAATSA” and “not tolerate significant transactions with Russia's defense sector.”

The sanctions include a ban on US export licenses to Turkey’s Presidency of Defense Industries (SSB) — the government agency in charge of military procurement and exports and the development of the local defense industry — as well as an asset freeze and visa restrictions on the SSB’s president and three senior officials.

Two diverging views have emerged in Ankara on how the sanctions will affect the country’s defense industry.

The first is prevalent in pro-government and nationalist quarters, which are putting on a brave face. They argue that the sanctions amount to an embargo, but similar moves in the past have served to strengthen national spirit and invigorate the country’s defense industry. The nation has nothing to worry about, they say, as Turkey’s defense industry is stronger than ever today and the army is well stocked thanks to long-term planning. The pro-government media is actively propagating those arguments, though the reality is a bit different.

The second view is that the sanctions will badly hurt the Turkish defense industry in the medium term of two or three years, although their short-term impact over the next year might be limited.

Turkey’s defense industry remains reliant on imports from the United States, as evidenced by the 2019 performance report of the Defense and Aerospace Industry Manufacturers Association. The industry’s $1.4 billion in purchases from the United States, mostly raw materials and semi-processed products, account for 45% of its total imports, which were worth nearly $3.1 billion last year, according to the report. The breakdown shows that $648 million worth of imports were destined for the Turkish air force, $564 million for civil aviation and $107 million for land systems.

The sanctions do not directly target state-owned military companies and the private sector, and a US source familiar with the decision told the Financial Times that the scope was limited to avoid hurting the extensive ties between the US and Turkish militaries.

Still, the sanctions stand to affect roughly 40% of Turkey’s defense industry imports from the United States and could have a devastating impact should they continue for two or three years, a Turkish defense expert told Al-Monitor on the condition of anonymity.

Air force equipment and land systems stand out as the most vulnerable areas. For the Turkish air force, crucial aspects include the modernization and maintenance of its F-16 fighter jets, the TF-X national combat aircraft project and Turkey’s reliance on foreign-made aircraft engines. In terms of land systems, the sanctions threaten to undermine the operational efficiency of radars, command-control systems and armored vehicles, among others. The air force has already taken a severe blow from Turkey’s expulsion from the F-35 joint strike fighter program last year — Washington’s initial retaliation to the S-400 purchase.

The SSB is currently running about 700 projects worth up to 70 billion Turkish liras ($9 billion), including many that involve export licenses. A series of national projects rely on hundreds of US-made systems and sub-systems. Looking from this perspective, the sanctions threaten to choke the Turkish defense industry in the long term.

Moreover, the sanctions are likely to discourage third parties from collaborating with the SSB, the defense expert said. Such risks would hover over Turkey’s tank and aircraft engine needs as well as a series of national projects on key equipment such as the T70 general-purpose helicopter, the TF-X combat aircraft, the HurJet training aircraft and the MILGEM combat ship and the export of the T129 attack helicopter.

In the past several years, the United States and European countries have already imposed partial de facto embargoes on Turkey amid myriad political rows. A case in point is the T129 helicopter gunship, which Turkey has sold to Pakistan but failed to deliver due to Washington’s reluctance to issue export licenses for the US technology, namely the engines, used to make the helicopter. The problem has jeopardized the deal, forcing Pakistan to extend the delivery deadline.

Some in Ankara are floating a bypass to circumvent the sanctions — a legal amendment to transfer certain projects back to the Defense Ministry’s foreign procurement department, which was responsible for them until a few years ago. Such a move, however, might trigger additional US measures, as Washington appears determined to enforce the bans.

In the best-case scenario, the sanctions would force a comprehensive structural overhaul in Turkey’s defense industry as they hit procurements from the United States and hamper weapons development projects in the short run. Turning the crisis into an opportunity, Turkey could develop a strategy to achieve domestic production of key components in the long term, or so optimists hope.

In the worst-case scenario, the sanctions would remain in place under the upcoming Joe Biden administration and largely discredit the Turkish defense industry in a couple of years before it has matured enough to sustain its growth and become globally competitive. Critics of Erdogan’s government see little chance of a sound strategy to minimize the fallout of the sanctions, convinced that rational thinking is long gone in Ankara.

Moreover, further sanctions under the Biden administration cannot be ruled out and the European Union could follow suit. German Chancellor Angela Merkel said last week that the EU wants to discuss arm exports to Turkey with NATO allies and coordinate its actions with the Biden administration. She spoke after EU leaders agreed to outline limited sanctions over Turkey’s gas exploration row with Greece and Cyprus, but deferred any harsher measures until March.

As to how the crisis could be overcome, no easy solutions appear to be at hand. The scenarios include the following:

In its initial reaction to the sanctions, Ankara said it “stands ready to address this issue through dialogue and diplomacy,” but also threatened to “retaliate in a manner and timing it deems appropriate.”

Ankara’s response to the current and any further sanctions could range from token or mild measures to escalatory moves such as activating the S-400s, shutting the US military base in the southern town of Incirlik or the NATO early-warning radar station in the eastern province of Malatya, further rapprochement with Russia and a fresh military operation against the Syrian Kurds.

Does Ankara have the will and the capacity to resolve the crisis? The government’s foreign policy record in recent years leaves little room for optimism. Moreover, the S-400s are increasingly becoming the subject of domestic politics at a time when Ankara is scrambling to divert public attention from grave economic woes. And the Kremlin is, no doubt, closely watching Ankara.