Drawing on the role of Turkish drones in bolstering Ukraine’s defense, Erdogan has urged NATO partners to lift restrictions on military sales to Turkey. But US sanctions remain a tough row to hoe. 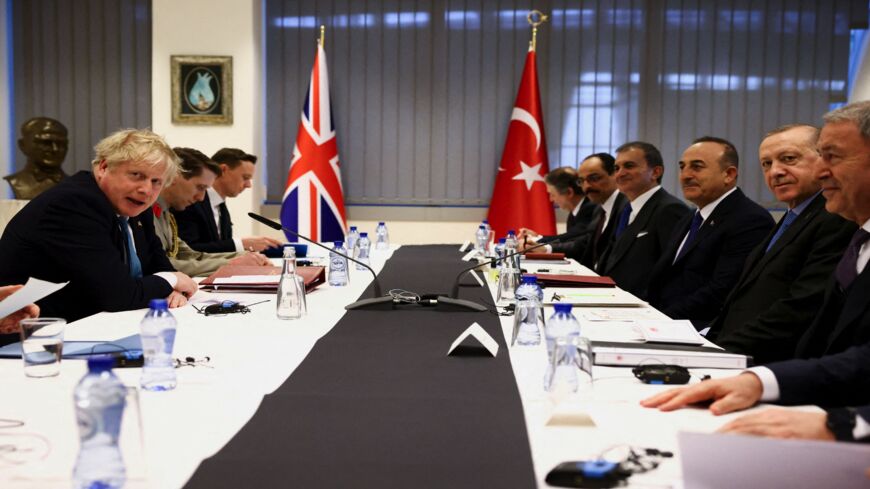 Turkish President Recep Tayyip Erdogan seems to have returned buoyed from the March 24 NATO summit in Brussels, hoping that the Russian war against Ukraine will encourage Western nations to remove bans on military sales to Turkey. While European countries are likely to be more flexible, US sanctions remain a tough row to hoe.

Russia’s invasion of Ukraine has revived NATO and relatively eased Erdogan’s diplomatic isolation in the Western fold. Erdogan held bilateral meetings with the leaders of France, Britain, Italy, Spain and Estonia at the summit, and pressed for the removal of direct and indirect sanctions that NATO allies have slapped on Turkey’s defense industry amid frequent rows in recent years.

Referring to the role of the Turkish-made Bayraktar TB2 armed drones in bolstering Ukraine’s defenses against Russia, Erdogan said, “Given the obvious success of Turkey’s defense industry, there is no reasonable justification for the obstructions we face in this field. The lifting of restrictions imposed by some allies will be in our common interest. Covert or direct embargoes should not be even mentioned between allies. I shared our expectations with the leaders.”

Erdogan’s message is directed at a long list of recipients.

The United States expelled Turkey from the F-35 joint strike fighter program in 2019 over its acquisition of the Russian S-400 air defense systems. Arms sales to Turkey were effectively halted in light of the Countering America's Adversaries Through Sanctions Act. The Nagorno-Karabakh war in 2020, in which Turkey backed Azerbaijan against Armenia, prompted scrutiny of the Bayraktar drones. Turkey’s request to upgrade its existing F-16 fleet and buy new F-16s has been snagged by Congress. The United States has refused to approve the sale of MK41 vertical launching systems and rolling airframe missiles, which Turkey planned to use respectively on its locally made ISTIF-class frigates and ADA-class corvettes. A 2018 deal for Turkey’s sale of 30 T129 ATAK helicopters to Pakistan has fallen through due to US reluctance to issue export licenses for the US-British-made engine. The sale of the same helicopter to the Philippines was greenlit, however, and Turkey delivered the first two of six helicopters earlier this month.

Canada has slapped restrictions targeting the Bayraktar drones, which, for Erdogan, have become a matter of pride. Citing improper use in the Nagorno-Karabakh war, Canada halted exports of engines and optics technology used in the drones.

The Czech Republic, Finland, the Netherlands, Norway, Spain and Sweden have imposed full arms embargoes on Turkey since 2019 over its military interventions in Syria. France has placed restrictions on an array of defense and aviation sub-systems, and Italy and Britain have barred the sale of certain products. Germany has suspended plans to upgrade Turkey’s Leopard-2 tanks and raised bureaucratic hurdles to the sale of other equipment. Turkey’s 2019 military incursion into northeastern Syria led also to the suspension of talks with French-Italian manufacturer Eurosam for co-production of the SAMP/T air defense system.

The Ukraine war has put the value of Turkey’s role in NATO back into the spotlight, and Erdogan is trying to make the best of it. In the first tangible outcome, Italian Prime Minister Mario Draghi, who called Erdogan “dictator” last year, announced after talks with the Turkish and French presidents in Brussels that they had agreed to revive a cooperation platform between the three countries. Erdogan expressed hope the trilateral talks would resume after the French elections in April. Asked whether he was referring to the SAMP/T talks, Erdogan responded in the affirmative. And Foreign Minister Mevlut Cavusoglu said Italy and France were thinking “more seriously” now on co-producing the SAMP/T systems in Turkey.

Will the thaw between Turkey and its Western partners last?

The praise heaped on Turkey has raised the prospect of turning a new page, but much depends on Turkish rapport with NATO and the European Union. Ankara’s acquisition of the S-400s remains a big stumbling block, with Washington insisting that Ankara should get rid of the systems. In a bid to hit two birds with one stone, Washington has suggested that Turkey send the S-400s to Ukraine. Speaking to reporters on the flight back from Brussels, Erdogan dismissed the idea, saying the S-400 issue was not open to discussion. While Ankara’s chances of returning to the F-35 program appear all but lost, Erdogan sounded hopeful on the F-16s. President Joe Biden had promised to “present a positive view to Congress and follow up on the issue,” he said.

Still, Erdogan’s failure to get a bilateral meeting with Biden at yet another summit, even as Black Sea states have grown all the more important for Washington, casts doubt on overly optimistic conclusions in Ankara that Turkey’s value is now better recognized.

Serhat Guvenc, a professor of international relations at Istanbul’s Kadir Has University, believes Turkey stands a chance of seeing arms embargoes removed, even if partially. The Biden administration could persuade Congress on the F-16 package, but bans and sanctions are likely to continue unless Ankara meets US expectations on the S-400s, Guvenc told Al-Monitor.

As for the Bayraktar drones, their role in Ukraine has largely effaced the negative impact of their use in Nagorno-Karabakh, according to the academic. “It was the Polish and Ukrainian lobbies that prevented additional sanctions on Turkey over the Bayraktars in Congress,” he said, stressing that the climate has profoundly changed since Russia’s invasion of Ukraine. “Thus, flexibility on the F-16 issue is possible,” Guvenc added.

Canada might review its stance as well. Turkey had sold drones to Ukraine before the invasion and “has since allegedly shipped (more) Bayraktars to Ukraine from the Turkish army’s own inventory,” Guvenc said. “So I don’t expect much Canadian criticism against the supplier of a system that Ukraine has praised so much. Canada has firmly backed Ukraine from the very outset and risks contradicting itself.”

The academic underscored also German Chancellor Olaf Scholz’s landmark announcement of a special defense fund of 100 billion euros in response to Russia’s invasion of Ukraine. The Germans “will now view the armament of allies from the same perspective,” Guvenc said. The Ukrainian refugee wave to the EU is another important factor. The Germans “now need the Syrian migrants to stay in Turkey more than ever. This would lead them to review their reservations on the tanks,” he said. “And if Turkey does not deviate from the NATO line and acts in unison with NATO in the Black Sea region, the de facto embargo on parts for (Turkey’s) Reis-class submarine might be relaxed as well. Turkey is the only Black Sea country other than Russia that has submarine power,” he noted.

During his March 14 visit to Ankara, Scholz underlined the importance of collaboration between NATO members, including Turkey. Asked about Ankara’s refusal to join Western sanctions against Russia, he said Turkey deserved acknowledgement for supplying weapons to Ukraine and supporting the country’s territorial integrity. As for restrictions on arms exports to Turkey, he said that Germany has a strict policy on defense exports and “has to act within a legally defined framework.”

Ankara has put on a brave face against the embargoes, arguing they only reinforce its determination to further develop its defense industry. Yet engine development remains a major handicap of the local industry. Efforts to develop indigenous engines continue, and so does the quest for alternatives.

Turkey was unable to secure a German engine for the Altay, its first indigenous tank, and had to turn to South Korea’s Doosan and S&T Dynamics after long delays in the development program.

Baykar, the manufacturer of the Bayraktar drones, has sealed deals with Ukrainian manufacturers to procure engines for its Akinci drone and prospective unmanned combat aircraft known as MIUS. Similarly, Turkish Aerospace Industries (TAI) plans to procure 14 engines from Ukraine’s Motor Sich by 2025 for its ATAK-2 heavy-class combat helicopter project. In November 2021, Turkey reached an agreement on joint engine production with Ukrainian companies Ivchenko-Progress and Motor Sich. Ukrainian assistance has been considered also for Turkey’s future fighter jet, the TF-X.

With the Russian siege extending to Kharkiv, the heart of Ukraine’s defense industry, Turkey’s partnership with Ukraine is clouded by uncertainty. “The invasion dealt a blow on Turkey’s plans to procure engines for its drones from Ukraine,” Guvenc said. “Yet the Ukrainians could now grow more open to know-how and technology-sharing. Producing the Ukrainian engines under license could resolve the engine issue.”

Meanwhile, ambitious progress has been reported in domestic engine development projects, though often accompanied by doubts and controversy. The PD170 turbodiesel engine, developed by Tusas Engine Industries (TEI), is planned to be used in Bakyar’s Akinci-C and Bayraktar TB3 series and TAI’s Anka and Aksungur drones. At least 60 PD170 engines have been already produced.

There are also plans to use a turboshaft engine developed by TEI and Kale Arge on the TF-X fighter, which is expected to make its first test flight in 2026. The T625 Gokbey light transport helicopter, scheduled for mass production in 2023, is fitted with TEI’s TS1400 turboshaft engine.

The Turkish defense industry’s exports reached $3.2 billion last year, up from $634 million in 2010, while local content in the industry reportedly rose to some 80%. According to the Stockholm International Peace Research Institute, Turkey’s arms imports decreased 59% in the 2016-2020 period in comparison to the 2011-2015 period. An 81% drop in imports from the United States accounted for much of the decline.