US forced to mull sanctions against Turkey after S-400 purchase

The delivery of the Russian-made S-400 missile defense system to Ankara has forced a new US sanctions regime into effect. 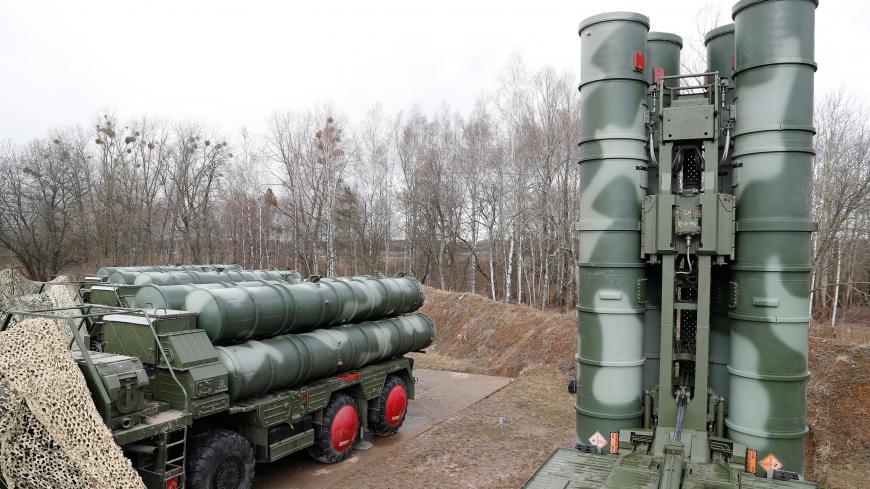 Acting Defense Secretary Mark Esper called his Turkish counterpart to reprimand Ankara after the delivery of a Russian air defense system to Turkey on Friday, as the Donald Trump administration deliberated automatic sanctions for the move. The arrival of the Russian-made system is widely seen as a turning point in Ankara’s unraveling ties with the United States and its 67-year alliance with NATO.

The delivery was trumpeted by pro-government outlets as irrefutable proof of Turkey’s unbending sovereignty and strength in the face of global powers. The Ministry of Defense was eager to show off its new kit, tweeting footage of the giant Russian transport plane carrying the first set of components as it landed at the Murted air force base in Ankara.

Turkey’s receipt of the S-400 comes after nearly two years of warnings from the Pentagon, State Department and Congress that accepting the Russian system would lead to automatic American sanctions after Turkish President Recep Tayyip Erdogan first signed a $2.5 billion deal for the system in 2017. Erdogan has since consistently said he would not step back, apparently banking on his good personal relations with Trump to get Turkey off the hook.

At the last meeting between the two leaders before the delivery, at the G-20 summit in Osaka last month, President Trump appeared willing to extend Turkey lenience. “It is not really President Erdogan's fault,” Trump said at a press conference, insisting the Turkish leader had been treated “very unfairly” over the course of the negotiations.

Meanwhile, Turkey aggressively lobbied to stop possible US sanctions in the final weeks before the delivery, telling Congress that the $3.5 billion proposed US Patriot sale had come too late to back out of the Russian deal. The Pentagon also flatly rejected a Turkish-proposed technical committee to mitigate differences between the two systems.

In a statement on Friday, bipartisan leaders of the Senate Armed Services and Foreign Affairs panels urged Trump to implement harsh sanctions, saying Erdogan “rejected multiple attempts by the United States to preserve our strategic relationship” before opting for the Russian system. In an interview with the BBC on Friday, Sen. Jack Reed, D-R.I., said the move would eliminate Turkey from the F-35 program.

Yet even if the White House sought to hold off on possible penalties, the way that the sanctions law is written would make it difficult for the US administration to find a workaround, experts say.

“You could imagine a universe where you provide this range of options, and they end up picking a step that’s intended to be the least bitter pill for the Turks to swallow in an effort to preserve the bilateral relationship,” said Scott Anderson, a former State Department official during the Barack Obama administration.

US law would force the Trump administration to implement at least five out of 12 possible sanctions for the purchase, with the State Department making the final call on which entities to sanction over the deal. The basket of sanctions available to the United States include slashing loans from American financial institutions, freezing assets or directly punishing high-profile Turkish officials, and limiting exports.

The Countering America’s Adversaries Through Sanctions Act allows the White House to delay the imposition of sanctions by 180 days if Trump determines Turkey is significantly reducing purchases of Russian equipment, which could prove legally challenging.

Former US officials say that the Defense Department sent teams to Turkey negotiate a better deal for the Patriot during the Barack Obama administration, but the deal was complicated by increasingly testy relations between the two sides.

“There’s been all kinds of variations of offers in price, in industrial share, in tech transfer," said Jim Townsend, a former deputy assistant secretary of defense for Europe and NATO. “But just as negotiations were making progress, the sale got caught up in hot bilateral politics involving US policy in Syria, the 2016 coup attempt and the US refusal to extradite Turkish cleric Fethullah Gulen. Erdogan eventually felt by going with the S-400 he could punish the US and secure Russian support for Turkey at the negotiating table when Syria’s future was decided.”

The United States’ continued support for the Syrian Kurdish People’s Protection Units, an offshoot of a Kurdish group waging a bloody campaign against the Turkish army since 1984, is an unremitting source of fury and ever deeper distrust. It has provided fodder for anti-American factions within the Turkish military who have long advocated closer ties with Russia and China and are spearheading Turkish moves against Greece and Cyprus in the Eastern Mediterranean.

Unsurprisingly, Dogu Perincek, an ultranationalist politician who speaks for the Eurasianists, could barely contain his joy on Twitter today: “We salute the arrival of the S-400s. Turkey has proven once again that it will not bow to Atlantic pressure. The S-400s signal the establishment of a new world order.”

To be sure, the decision to pursue the S-400 deal goes beyond tit for tat over Syria and speaks to Ankara’s broader efforts to redefine its relationship with the United States and the West more generally. Erdogan has long made clear that the current balance in power does not assign Turkey the status and influence it deserves. One of his favorite slogans is “the world is bigger than five,” a reference to the UN Security Council’s five permanent members.

Yet the S-400 is deeply personal for the Turkish strongman. Erdogan has never disguised his conviction that the Obama administration had a finger in the failed coup. The coup plotters flew F-16 fighter jets that might have been intercepted if Turkey had the Russian system in place then. The Pentagon worries that the S-400 can use its powerful radar to uncover the F-35’s stealth capabilities.

Now the delivery forces the United States to continue the complex process of removing Turkey from the F-35 program, after the Pentagon stopped Turkish trainees from flying on the jets after Ankara sent troops to train on the S-400 in Russia.

On Thursday, the Pentagon reprogrammed $206 million to offset Turkey’s manufacturing efforts in the fighter jet, including the aircraft’s fuselage.