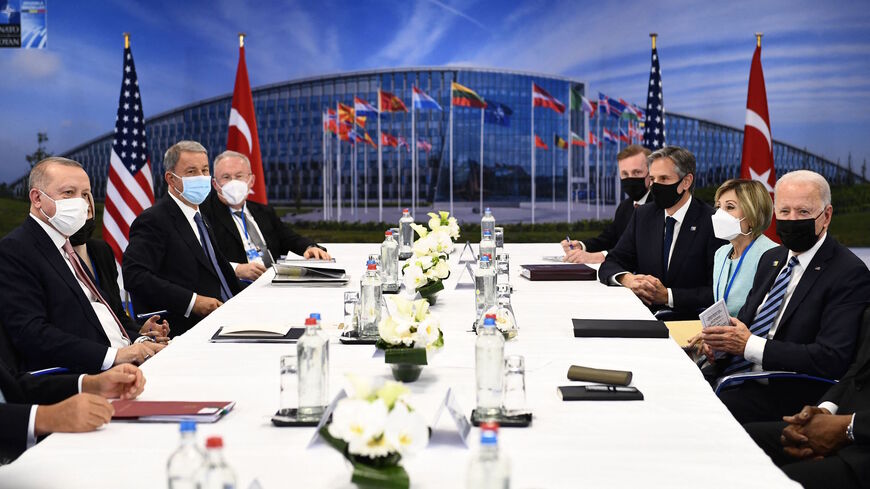 Turkey's President Recep Tayyip Erdogan (L) and US President Joe Biden (R) attend a bilateral meeting on the sidelines of the NATO summit at the North Atlantic Treaty Organization headquarters in Brussels on June 14, 2021. - BRENDAN SMIALOWSKI/AFP via Getty Images

ISTANBUL ­— Turkey’s lira fell as much as 1.5% Tuesday after a highly anticipated meeting on Monday between US President Joe Biden and his Turkish counterpart Recep Tayyip Erdogan ended without clear progress on bilateral tensions.

The two leaders met for the first time as presidents on the sidelines of the NATO summit in Brussels, and while both relayed positive statements following the talk, markets reacted negatively on unmet expectations over a compromise regarding Ankara’s 2019 acquisition of Russian-made S-400 missiles, which remain a key point of contention in US-Turkey relations.

The lira dove to 8.58 against the dollar early Tuesday, erasing gains made last week on investor optimism ahead of the meeting. The currency’s slide began shortly after Erdogan reiterated his views on keeping the S-400 missiles in Turkey in comments to reporters Monday evening.

“Our thoughts on the S-400 are the same as before; I relayed our same thoughts to Mr. Biden,” Erdogan said.

In the past, US and NATO officials have stated the missiles pose a security threat to alliance defense systems within Turkey, while the Biden administration has maintained the stance that Ankara must remove the S-400s from Turkish territory to normalize ties and lift US sanctions imposed as a result of the purchase. Turkey was also suspended from NATO’s F-35 fighter jet program shortly after the missile acquisition.

Expectations of a possible compromise began to take form in early February, when Turkish Defense Minister Hulusi Akar said officials would pursue solutions similar to the “Crete model,” which would see the S-400s relocated outside Turkish borders.

More recently, rumors have circulated over the possibility that Ankara officials would propose moving the S-400s to Incirlik airbase in southern Turkey, where they could be monitored by US military personnel. The idea gained momentum in late May after Ankara stated it would send home Russian missile experts overseeing the S-400s.

Yet after the Biden-Erdogan meeting Monday, which ended without detailed statements nor a White House readout on the topics discussed, observers have been left waiting to see what steps the allied nations will take next in addressing grievances on both sides.

"We had a positive and productive meeting, much of it one-on-one," Biden told reporters in Brussels Monday, adding, “Our teams are going to continue our discussions and I'm confident we'll make real progress with Turkey and the United States.”

One area of possible US-Turkey cooperation in the near term could come via Erdogan’s proposal to maintain Turkish troops in Afghanistan to protect and oversee operations at Kabul’s international airport as American soldiers withdraw from the country this year.

Other points of collaboration with NATO allies include Turkish-French discussions to expel foreign mercenaries from the ongoing conflict in Libya, as well as efforts to continue dialogue between Ankara and Athens to de-escalate disputes over maritime boundaries in the eastern Mediterranean Sea.

Cooperation on Syria and aid deliveries to displaced populations in Turkish-controlled areas present another realm where some US and Turkish interests align, Emre Peker, a director at the Eurasia Group, told Al-Monitor, adding, “but beyond that I think we’re looking at a long-term decline in US-Turkey relations despite the positive spin coming out of yesterday’s meeting.”

Ankara harbors its own list of grievances with the United States, including Washington’s ongoing support for Kurdish militants in northern Syria, the US refusal to extradite exiled cleric Fethullah Gulen, who Ankara claims orchestrated a failed 2016 coup, and ongoing legal proceedings against the Turkish state bank Halkbank for its role in helping circumvent US sanctions on Iran.

“That road map has been out there since the purchase of the S-400s,” Peker told Al-Monitor. “It’s just that the road was never taken, and I don’t anticipate either Ankara or Washington to take that road in the near future, so I think investors were getting a little bit ahead of themselves with their optimism” ahead of the Biden-Erdogan meeting.

Following the meeting Monday, Erdogan said Turkey’s foreign and defense ministers would continue to hold discussions with their US counterparts regarding the S-400 missiles and possible solutions.

"The continuation of [US] pressure and sanctions policies against Turkey in their current state will damage ties between the two countries in many ways,” Bahceli told MHP lawmakers in Ankara. “The same United States has applied a double standard against Turkey as it holds channels of diplomacy and negotiation open with other countries with whom it has problems."