Turkish official hints at possible S-400 missile compromise with US

Turkish Defense Minister Hulusi Akar said Tuesday that Ankara might be willing to "find a solution" for its Russian-made S-400 missile acquisition if Washington reevaluates its cooperation with Kurdish forces in Syria. 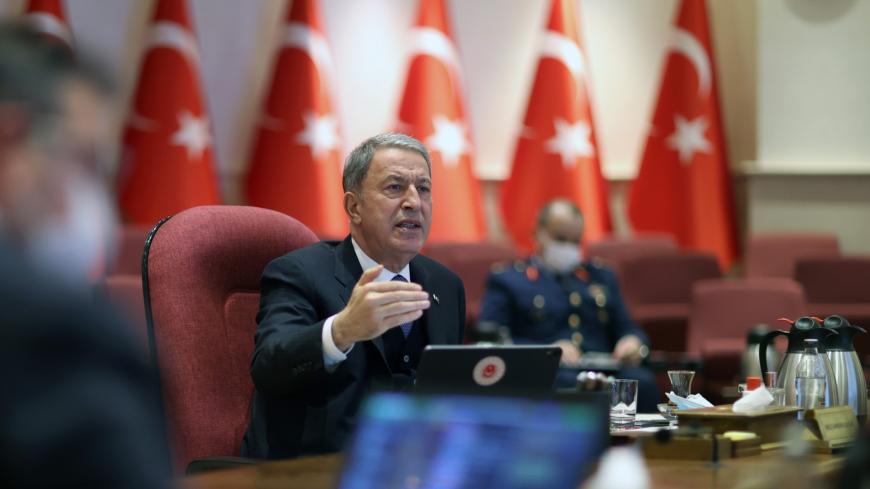 ISTANBUL — Ever since the first batch of S-400 missiles landed just outside Ankara in 2019, Turkey’s acquisition of the Russian-made air defense system has been a central friction point in its relations with the United States.

Washington has repeatedly called on Turkey to remove the S-400s from its territory, citing concerns that their radars pose a threat to NATO defense infrastructure. Leading Turkish officials, however, maintained the missiles were necessary to bolster domestic security. This stance initially led to the nation's suspension from NATO’s F-35 fighter jet program and later, in December 2020, saw the imposition of US sanctions on Turkey over the purchase.

Throughout the discord, a top security concern for Ankara has been Washington’s cooperation with Kurdish forces in Syria known as the People’s Protection Units (YPG), which Turkish officials view as an extension of the Kurdistan Workers Party (PKK), a militant insurgency that has been at war with the Turkish state since the 1980s. Since 2014, the United States has worked with YPG forces to eradicate the Islamic State from northeast Syria.

Now, nearly three weeks into US President Joe Biden’s tenure, a top Turkish figure has hinted at a possible opening to settle the long-standing S-400 issue by linking it with Ankara’s concerns over Kurdish forces in Syria. In an interview with the Hurriyet newspaper published Tuesday, Turkish Defense Minister Hulusi Akar signaled that Ankara might be willing to compromise on the Russian missiles if Washington reevaluates its support to the YPG.

The statement was the first of its kind since Ankara acquired the S-400s and prompted speculation as to whether such negotiations might offer an avenue to defuse grievances on a range of issues. Turkey expert Aaron Stein, however, told Al-Monitor that Ankara would need to offer more to “satisfy a very angry Congress.”

“The statement is noteworthy and clearly a budge off the maximalist rhetoric we have been hearing,” said Stein, the research director at the US-based Foreign Policy Research Institute. “However, I would temper expectations of a quick reset. First, we need to hear this from [Turkish President Recep Tayyip] Erdogan. He is the only one that really matters.”

Erdogan said Jan. 15 that he hoped the incoming Biden administration would take “positive steps” in negotiations regarding the S-400s and Turkey’s suspension from the F-35 fighter jet program.

“Despite having paid a serious fee on the F-35s, the F-35s still have not been given to us. This is a serious wrong the United States did against us as a NATO ally,” Erdogan said.

But Pentagon press secretary John Kirby said Feb. 5 that the United States would not lift the F-35 ban on Turkey. Kirby said the S-400 purchase was “inconsistent with Turkey’s commitments as a US and NATO ally” before urging Ankara not to retain the S-400 systems.

In his comments to Hurriyet, Akar said no other NATO-allied countries had raised the S-400 issue with Turkey. He also noted that several former Warsaw Pact countries in Europe that have since joined NATO retained Soviet-era weapons systems without coming under similar punitive measures.

Seeking a possible middle road, Akar said the 1998 transfer of Russian-made S-300 missiles from the Republic of Cyprus to the Greek island of Crete could serve as a model.  He said the S-300s in Crete are rarely operational and remain mostly in storage, similar to Ankara’s current plans for its S-400s.

“These systems are used according to the threat situation. We decide that,” Akar told Hurriyet.

Though referencing the Crete model might signal flexibility on Ankara’s part, Ozgur Unluhisarcikli, Ankara director for the German Marshall Fund, noted the Countering America's Adversaries Through Sanctions Act — the CAATSA framework under which the United States sanctioned Turkey for its S-400 purchase — did not exist at the time of the S-300 crisis.

Unluhisarcikli told Al-Monitor that a possible settlement could hinge on whether or not Turkey’s S-400s remain operational.

“Does this mean Turkey will keep the S-400s boxed up, or does it mean Turkey is willing to turn them on and off?” Unluhisarcikli asked. “While the former is likely to lead to a solution the US may also agree to, the latter is unlikely to do so.”

The developments come after Erdogan said in January that Turkish officials were in ongoing discussions with Russian counterparts regarding the possible purchase of a second batch of S-400s.

It hasn't helped that on Feb. 3, Turkish Interior Minister Suleyman Soylu accused the United States of supporting a 2016 coup attempt in Turkey. The US State Department condemned the statement as “unfounded” the same day.

Two days before that exchange, the Biden administration held its first call with an Turkish official. During a nearly one-hour discussion, US national security adviser Jake Sullivan and Turkish presidential spokesperson Ibrahim Kalin discussed US-Turkish relations and pathways to “managing disagreements effectively,” according to a White House press release.

by Murielle KASPRZAK and Joseph SCHMID | AFP | May 26, 2022
END_OF_DOCUMENT_TOKEN_TO_BE_REPLACED