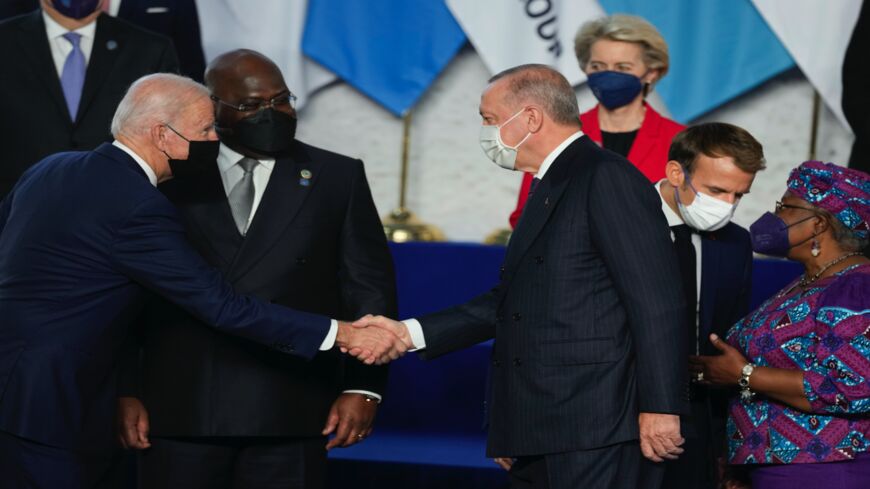 ISTANBUL — Following several scheduling changes, US President Joe Biden and his Turkish counterpart, Recep Tayyip Erdogan, met on the sidelines of the G20 summit in Rome Sunday to discuss the nations’ troubled tensions.

High on Erdogan’s agenda was a request to purchase 40 new F-16 fighter jets and about 80 modernization kits to upgrade Turkey’s aging fleet. Erdogan said Sunday Biden was receptive in discussions regarding the jet deal and they talked in a “positive atmosphere.”

Erdogan expanded on the statements Monday after abruptly canceling plans to attend the COP26 climate conference in Glasgow over alleged disagreements on security arrangements, telling reporters aboard his Turkey-bound flight he expected Biden to help in the approval process for the F-16 deal.

According to Turkish media reports, Erdogan said Biden told him the purchase confirmation would need to go through the US Congress and “we may not get results very soon.” But Biden pledged to do his best.

In recent weeks, Erdogan has sought to purchase the jets through a financing arrangement that would see the $1.4 billion Turkey paid toward an F-35 fighter jet program repurposed for the F-16 package. Turkey was suspended from the F-35 program following a 2019 acquisition of Russian-made S-400 missile defense systems, which US officials say threaten to compromise the F-35’s technology.

The F-16 jet request comes amid high tensions in US-Turkey relations, which most recently materialized in Erdogan’s threat last month to expel 10 foreign envoys, including the US representative, over a joint call for the release of imprisoned Turkish philanthropist Osman Kavala.

Yet amid bilateral disagreements spanning from Syria policy to sovereign rights in the Eastern Mediterranean and beyond, analysts see the continuation of F-16 purchase discussions as an avenue for “positive dialogue” between the NATO-allied nations.

“The most important outcome is that neither side is willing to go for a rupture,” Galip Dalay, a doctoral researcher at Oxford University and associate fellow Chatham House, told Al-Monitor regarding the Biden-Erdogan meeting.

Dalay added, “The F-16 is one of the major test cases in the relationship because [it] … will indicate to what extent the Turkey-US relationship can be managed.”

As aforementioned, approval for the deal would need to go through US Congress, where 11 lawmakers recently voiced opposition to the sale and anti-Turkey sentiments have been on the rise amid a number of bilateral disagreements in domestic and foreign policies.

Following Sunday’s meeting, the White House also put out a statement saying Biden reaffirmed “US concerns over Turkey’s possession of the Russian S-400 missile system” in his talks with Erdogan and “also emphasized the importance of strong democratic institutions, respect for human rights, and the rule of law for peace and prosperity.”

Still, Ozgur Unluhisarcikli, Ankara director for the German Marshall Fund, said the ongoing F-16 talks show Erdogan is willing to work with US officials on the issue, even if the approval process is likely to take time.

“[Erdogan] could have said Biden is not selling me jets, so I’ll buy [them] from the Russians,” Unluhisarcikli told Al-Monitor. “He’s not doing that. So despite the difficulties in the US Congress, he seems willing to walk the walk, which I think is positive.”

He added, “Attitudes toward Turkey might change, so it’s good to start the procedure now so that later on this procurement can be possible.”

After Turkey’s bid to secure Afghanistan’s main airport fell through following a controversial US troop pullout from the nation in August, Unluhisarcikli noted the F-16 deal offered a “positive agenda item” between the NATO allies apart from US-Turkey regional security and defense cooperation, which is often “taken for granted.”

Listing other points of ongoing US-Turkey cooperation, Dalay highlighted Turkey’s role in the Black Sea region, Ukraine, as well as near alignment in Ankara’s and Washington’s interests in both Iraq and Libya. In the long-term, Dalay also said Turkey’s growing footprint in sub-Saharan Africa could also draw interest from Western nations seeking to counter Chinese influence on the continent.

“What will test the future of the US-Turkey relationship … is basically great power competition and where Turkey will stand in that vis-a-vis Russia and China,” Dalay told Al-Monitor.

But to gauge near-term trends, Dalay pointed to Erdogan’s comments Sunday in which the Turkish leader said Ankara would take “positive steps” regarding the SAMP-T missile defense system developed by the French-Italian EUROSAM consortium. The expressed interest in advancing talks on the SAMP-T could offer an alternative to weapons purchase without the obstacles presented by US Congress and without the red flags that would be raised by another S-400 missile purchase from Russia.

Erdogan’s SAMP-T comment “reflects that Turkey doesn’t want to antagonize the West further,” Dalay told Al-Monitor. “But I don’t see how the F-16 issue can be resolved unless there is some kind of modus vivendi between Turkey and the US on the S-400.”

On Monday, Turkish Defense Ministry officials said Ankara would hold a second round of talks with US counterparts in the coming months to discuss Turkey’s suspension from the F-35 fighter jet consortium.