Turkey is making a final pitch to Congress to prevent US sanctions for purchasing a Russian air defense system, according to documents reviewed by Al-Monitor. 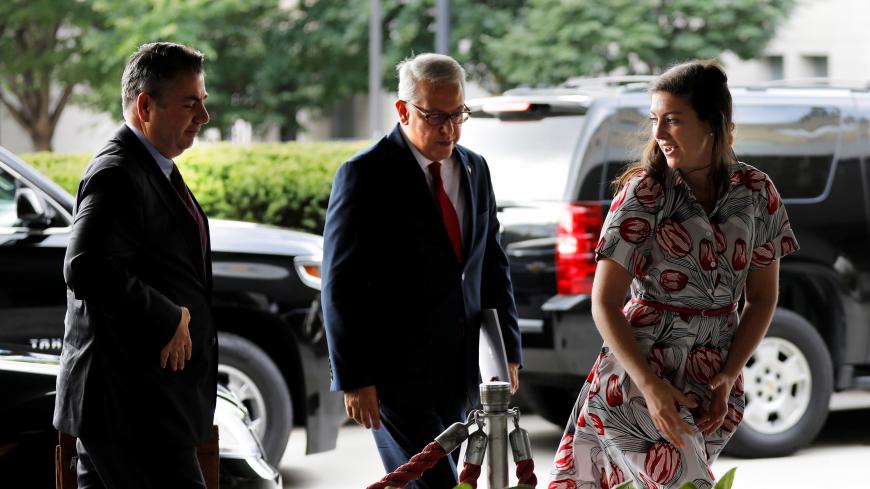 Turkey is making a final pitch to Congress to duck US sanctions for purchasing a Russian air defense system, according to documents reviewed by Al-Monitor.

In a letter sent to Congress last month, Serdar Kilic, the Turkish envoy to the United States, asked for a reprieve from US sanctions that target allies for buying Russian equipment. On Wednesday, the head of Russia’s state arms exporter said Turkey would receive its first missile defense battery in July.

“A basic tenet of diplomacy is to give enough chance to dialogue and consultations before resorting to unilateral measures,” Kilic wrote to the leaders of the powerful House and Senate appropriations panels — as well as the House Armed Services Committee — ahead of the debate over the annual must-pass defense bill.

Turkey has a $1.5 million annual contract with the lobbying outfit Greenberg Traurig, which, along with two subcontractors, distributed the letters. Greenberg employs former Sen. Tim Hutchinson, R-Ark., who served on the Armed Services Committee, and one-time Reps. Randy Forbes, R-Va., and Albert Wynn, D-Md., past members of the armed services and foreign affairs panels.

Under the Countering America’s Adversaries Through Sanctions Act, a 2017 law, the United States is obligated to sanction “major purchases” of Russian weapons systems. The Pentagon has stated since Turkey first inked a $1.5 billion deal for the S-400 system in 2017 that it would not pair with NATO-standard weapons.

In recent months, amid threats to boot Ankara from the F-35 fighter jet program over the deal, the Defense Department has also refused a Turkish bid to form a working group to mitigate technical concerns with the Russian system, refuting a Middle East Eye report that President Donald Trump had agreed to the offer.

“We have been clear that purchasing the S-400 would create an unacceptable risk because its radar system could provide the Russian military sensitive information on the F-35,” Department of Defense spokesman Eric Pahon told Al-Monitor last month. “Those concerns cannot be mitigated. The S-400 is a system Russia built to try to shoot down aircraft like the F-35, and it is inconceivable to imagine Russia not taking advantage of the collection opportunity.”

But Kilic said acquiring the Russian system was a matter of “necessity” to deal with the threat of Syria’s chemical weapons capabilities and ballistic missile launches from opposition-held areas, after Turkey said it failed to field a NATO-interoperable alternative between 2013 and 2017.

“We kept saying we need you to buy your own Patriot system,” said Townsend. “They also want to build their own system. They want the keys to the kingdom. They want the algorithms, they want to manufacture and they want a low price.” But talks, he said, fell apart after a coup attempt against Erdogan rocked Turkey in 2016.

The State Department approved a $3.5 billion sale of Patriot missiles to Turkey in December, but Kilic said the offer had come too late. Ankara signed up with the French-Italian Eurosam consortium for the SAMP/T system, but the project “fails to meet our urgent and very real short-term defense needs,” Kilic wrote. Yet a senior Turkish official told Al-Monitor last week that the consortium-designed system would provide a technical fix.

But the olive branch does not appear to have stopped pressure from the Trump administration and Congress. Earlier this month, the Pentagon grounded Turkish pilots training on the F-35 at Luke Air Force Base in Arizona and stopped accepting more students as a first step in winding down Turkey’s participation in the program. On Tuesday, the Senate moved ahead with a bill that would prohibit US funds to transfer the F-35 to Turkey if it moves ahead with the S-400 sale.

As Turkey moves toward a July delivery, the Pentagon’s temporary chief may not have the opportunity to sit in on the last leg of the negotiations. Politico reported last week that acting Defense Secretary Mark Esper, who traveled to Brussels on Tuesday to participate in a NATO defense ministerial, may have to recuse himself from the talks because of their implications on Raytheon, where he once was a lobbyist.

Speaking to his Turkish counterpart Hulusi Akar on the sidelines of the NATO gathering today, Esper repeated US warnings that Turkey "will not be permitted" to have both the F-35 and S-400, according to a Pentagon readout.