Following a diplomatic row this week, Turkish President Recep Tayyip Erdogan told reporters Tuesday he would seek to confirm a divisive F-16 deal with US counterpart Joe Biden at the COP26 conference in Glasgow. 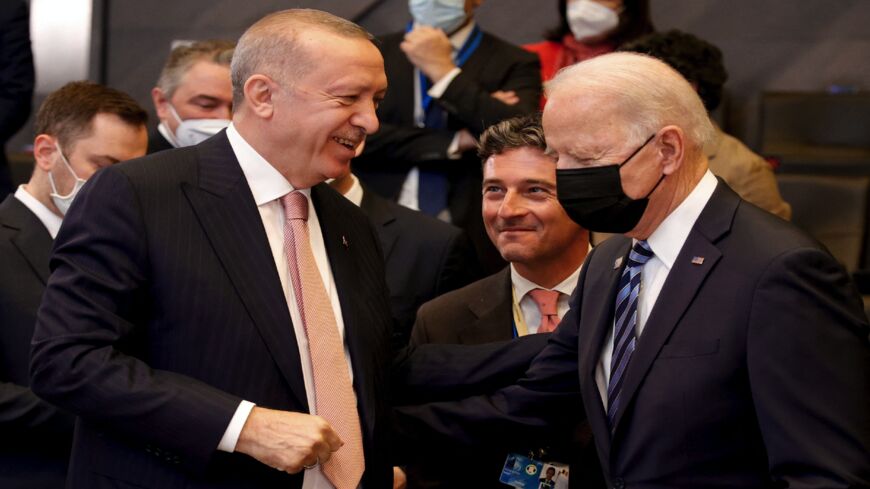 US President Joe Biden (R) speaks with Turkey's President Recep Tayyip Erdogan prior to a plenary session of a NATO summit at the North Atlantic Treaty Organization (NATO) headquarters in Brussels, on June 14, 2021. - OLIVIER MATTHYS/POOL/AFP via Getty Images

ISTANBUL — An expected meeting between Turkish President Recep Tayyip Erdogan and his US counterpart, Joe Biden, at the G20 summit in Rome this weekend has been postponed, Turkey’s leader said Tuesday.

The pair will instead meet on the margins of the COP26 climate conference in Glasgow, to be held between Oct. 31 and Nov. 12, where they will discuss a possible fighter jet deal, Erdogan told reporters aboard a return flight from Azerbaijan.

On Sept. 30, Turkey sent a formal request to the United States for the purchase of 40 new F-16 fighter jets and about 80 modernization kits to upgrade its existing fleet.

Erdogan has since sought a meeting with Biden to confirm the deal with aims to recover $1.4 billion Turkey put toward purchasing F-35 fighter jets before the nation was suspended from the program over its 2019 acquisition of Russian-made S-400 missile defense systems, which US officials say threaten to compromise the F-35’s technology.

Erdogan has deemed Turkey’s ouster from the F-35 program unfair and pledged to recover the nation’s financial contributions in developing the next-generation fighter jet, having claimed Washington offered to reimburse Ankara with an F-16 deal, a claim US officials deny.

Discussions over the F-16 deal come after a tense diplomatic row this month in which 10 foreign envoys to Turkey, including those of the United States, Germany and France, faced expulsion for calls to release jailed Turkish philanthropist Osman Kavala.

On Monday, Erdogan and the implicated envoys walked back comments, cooling tensions and averting what could have been one of Turkey’s most serious crises with Western allies in recent years.

Whether the row impacted the Erdogan-Biden meeting remains unclear, but the standoff likely weakened already frayed US-Turkey ties along with Erdogan’s hand in striking a favorable fighter jet deal, said Soner Cagaptay, director of the Turkish Research Program at the Washington Institute for Near East Policy.

“The shifting from the Rome G20 to Glasgow reflects frustration with Erdogan within the US government and more specifically within the White House,” Cagaptay told Al-Monitor. “Biden himself is not a big fan of Erdogan.”

Cagaptay said Biden knows Erdogan “well” after serving as Washington’s main interlocutor with the Turkish leader between 2013 and 2016 in former US President Barack Obama’s administration. Cleavages in US-Turkey interests in recent years along with Biden’s prior experience in Ankara may have prompted the US leader to give Erdogan “the cold shoulder” in keeping direct communications to a minimum since taking office, Cagaptay said.

Beyond personal relations, US lawmakers have also increasingly voiced concerns over Turkey’s warming relations with Russia. On Monday, a bipartisan group of 11 members from the US House of Representatives urged Biden not to sell Turkey the F-16 package in a letter addressed to the president and US Secretary of State Antony Blinken.

"Following President Erdogan's September announcement that Turkey will purchase an additional tranche of Russian S-400 missile defense systems, we cannot afford to compromise our national security by sending US-manufactured aircraft to a treaty ally which continues to behave like an adversary," the lawmakers wrote Monday.

Turkey’s first purchase of S-400 missiles triggered sanctions on the nation under the US Countering America's Adversaries Through Sanctions Act (CAATSA). Max Hoffman, director for national security and international policy at the Center for American Progress, said there’s “no easy way around the CAATSA sanctions” without Turkey changing its position on its S-400s.

“Equally, some in the administration and Congress would probably like to make the F-16 sale happen, both to keep the production line open and to prevent the complete collapse of defense ties with Turkey,” Hoffman told Al-Monitor.

Still, he noted the F-16 sale could pass through a process involving a presidential waiver, though it would come at a time when Ankara has alienated many former allies in Congress and the executive branch as well as key members of the Senate Foreign Relations Committee, which has the tools to block such actions.

Parallel to the F-16 question, Washington and Ankara continue to be at odds in Syria, where Turkey deployed troops near areas held by US-backed Kurdish militants Wednesday. The move signaled the possible preparation for a new Turkish military operation on Kurdish groups following a parliamentary vote a day earlier, which greenlighted the deployment of Turkish troops in Syria and Iraq for two more years.