The US-Turkish deal on Manbij sparks a Damascus opening to Syrian Kurds; Iran scolds Turkey on PKK operations in Syria; the HDP faces violence and an “uneven” playing field in elections; Iran is caught in the middle between Russia and Saudi Arabia. 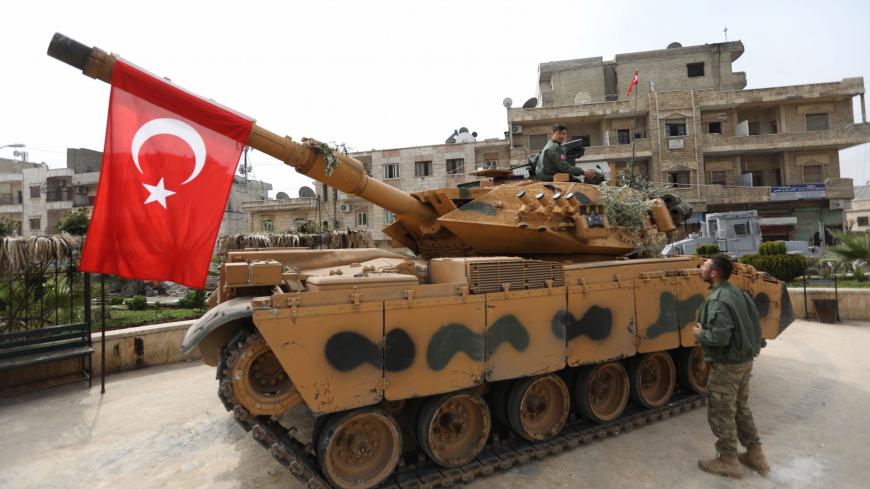 A tank belonging to Turkish soldiers and Ankara-backed Syrian Arab fighters is seen in the Kurdish-majority city of Afrin in northwestern Syria after they took control of it from the Kurdish People's Protection Units (YPG) on March 18, 2018. - GETTY/Omar Haj Kadour

No preconditions in PYD-Damascus dialogue

This column wrote in August 2017, “Turkey’s preoccupation with beating back Syrian Kurdish control in northern Syria could open the door to some type of accommodation with Damascus.” Since then, we have covered Iranian and Russian efforts to forge a deal between the Syrian government and the Democratic Union Party (PYD) that would pass muster with Ankara.

The recent US-Turkey agreement on Manbij has sparked a resumption of talks between Damascus and Syrian Kurdish leaders. Fehim Tastekin writes this week, “Given that Syrian President Bashar al-Assad's forces helped the YPG [People’s Protection Units] fight Turkey in Afrin — an unexpected gesture that ultimately proved futile — it's not a complete surprise that the Kurds would consider turning to the regime under the current circumstances.”

Assad told RT on May 31, “We started opening doors for negotiations [with the Syrian Democratic Forces (SDF), made up primarily of the YPG] because the majority of them are Syrians — and supposedly they like their country; they don’t like being puppets to any foreigners. That’s what we suppose.”

Tastekin reports that the PYD “did not turn away a delegation Assad dispatched in early June to Syrian Kurdistan. A Kurdish source who spoke with Al-Monitor on condition of anonymity said Kurds will now disregard entities intent on dividing Syria and will hear what Damascus has to offer.”

“Russia allowed Turkey a free hand in Afrin. Turkey’s propensity to want more in Afrin, the increasing tendency of the United States to appease Turkey and the possibility that the Kurds could lose the gains they made at Manbij” have compelled Syrian Kurdish leaders to reconsider an opening to Damascus, Tastekin continues. “[Idar] Khalil [co-chair of the Movement for a Democratic Society, the multi-ethnic governing coalition of Syrian Kurdistan], said that in negotiations with the regime delegation, the Kurds didn’t raise any preconditions such as pursuing the Democratic Federation of Northern Syria project, or the futures of the SDF and the YPG. The Kurdish intention is to first study the regime’s proposals and achieve the democratization of Syria through negotiations.”

“There have been other developments that could affect the Kurdish road map,” adds Tastekin. “Officials from Saudi Arabia, the United Arab Emirates and Jordan visited the area May 29 under the control of the Kurdish-dominated SDF, an umbrella group that includes the YPG. According to reports, this delegation met with the YPG at Qamishli and then met with representatives of Arab forces such as Senadid, Al Nukhba and the Raqqa Revolutionaries at a US base in Harab Isk village near Kobani to discuss forming a Sunni Arab force in the area. According to Turkey’s state-run news outlet Anadolu Agency, liaison offices were set up at Hasakah and Qamishli to enlist volunteers for that new force; they will be paid $200 per month.”

Last week, we wrote here, “Turkish President Recep Tayyip Erdogan is banking on Iran’s support for a Turkish offensive against Kurdistan Workers Party (PKK) bases in the Qandil Mountain range bordering Iran and Iraq, although questions remain about the scope of the operation and the extent of Iranian backing.”

Semih Idiz explains, “Hopes were raised in Ankara that cooperation between Turkey and Iran over the Kurdish issue would increase after both countries rejected the results of the independence referendum held by the Kurdistan Regional Government in northern Iraq in September 2017.”

But in an embarrassing retort to Erodgan and his ministers, who hyped the prospect of cooperation in Qandil, Iranian military spokesman Gen. Abulfazil Shekarchi said, “The Islamic Republic of Iran thinks military action against the territory of another country without permission from its legitimate government, with the excuse of combating terrorism, is illegal. … Iran will never support initiatives that will damage the sovereignty of neighboring countries.”

Idiz adds, “Like Russia — Turkey’s other “partner” in Syria under the Astana process — Iran also maintains that only foreign troops invited by the Syrian and Iraqi governments are legally present in those countries. Ankara counters by arguing that Baghdad and Damascus have lost control over parts of Iraq and Syria used by the PKK and the YPG, and says this has left Turkey with no choice but to act unilaterally in order to ward off the existential threat to the country’s security from these groups. … Iran’s own war against the PKK-affiliated Party for a Free Life in Kurdistan also fueled these hopes. Iran’s ongoing fight against this group, however, has not prevented Tehran from having a different policy on Turkey’s fight against the PKK or the YPG.”

“Ankara and Baghdad also remain at odds over the presence of the Turkish military in Bashiqa near Mosul. Iraq has repeatedly called on Turkey to pull back its forces there, a demand Ankara has refused to meet so far, citing the threat from the PKK,” Idiz writes.

“Pragmatism and a shared dislike of the West may impel Ankara and Tehran to maintain the appearance of good ties presently,” Idiz concludes. “Many expect, however, differences over Syria and Iraq to increase in time, because Turkey and Iran are ultimately on different sides of the Middle East’s active and growing sectarian fault line.”

HDP under siege on eve of Turkish elections

Amberin Zaman writes this week that "the playing field is already uneven” for the People’s Democratic Party (HDP) no matter the outcome of the Turkish elections. “The HDP's presidential candidate, Selahattin Demirtas, is in prison facing a slew of flimsy terror charges and is having to conduct his campaign with the help of his wife and social media accounts run by his adviser,” reports Zaman. “Although the former human rights lawyer has not been convicted, Erdogan continues to label him a terrorist at public rallies. Some 56 DBP [Democratic Regions Party] mayors who would otherwise join in the electoral effort are also behind bars on similar charges — among them Gultan Kisanak, the intrepid co-mayor of the Kurds’ informal capital, Diyarbakir, and one of the Kurdish movement’s most powerful orators.” The DBP is "the HDP’s sister organization in the mainly Kurdish southeastern region."

“Meanwhile, hardly a day passes without an HDP office being vandalized or coming under armed attack,” Zaman reports. “The assaults took a deadly turn when three HDP supporters from the Senyasar family were killed in a firefight in the southeastern town of Suruc on June 14. Eyewitnesses say the brawl erupted when AKP lawmaker Ibrahim Halil Yildiz and his armed men tried to force their way into a shop run by the men, demanding their votes. “

Yury Barmin writes, “Russian-Saudi relations appear to have been effectively compartmentalized. The two countries parade issues they easily agree on but don’t mention problems that are toxic for their partnership. The elephant in the room has traditionally been Iran, but Tehran hasn’t been featured in any official readouts from Russian-Saudi meetings of recent months. However, it’s hard to imagine that Riyadh would avoid discussing what it has labeled as the main threat to Mideast stability.”

“The issue of Iran’s expanding presence in the Middle East may not have been the top issue on the agenda when [Russian President Vladimir] Putin and [Saudi Arabian Crown Prince] Mohammed bin Salman met last week, but Moscow holds the key to containing Tehran in the region and Riyadh is aware of that. Moscow, however, doesn’t necessarily see Iran’s role in the Middle East as a threat to regional security. In fact, top Russian officials have been seeking to create a regional security organization that would include the two Gulf rivals.”