As conditions shift in Syria, Kurds open to talks with Damascus

Factors pushing Syrian Kurds to consider negotiating with the Syrian government include their loss of Afrin and the US-Turkey accord on Manbij. 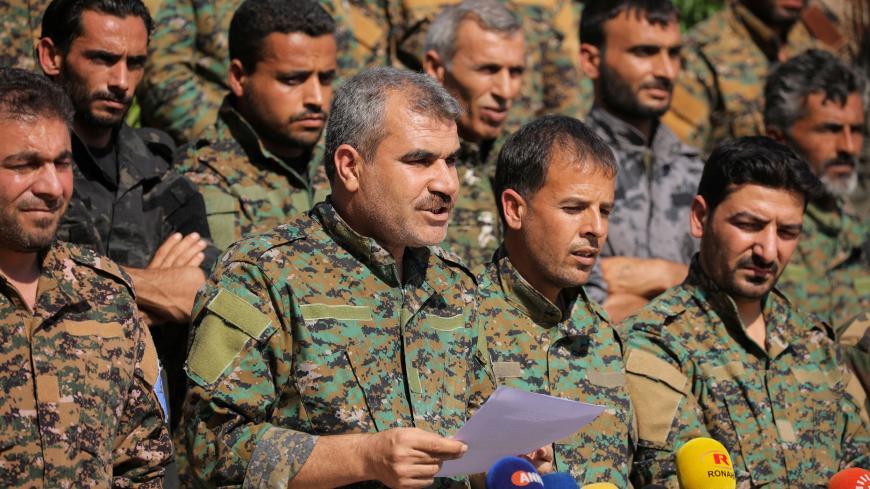 Actions by the United States, Turkey and Russia could be driving Kurds into the awkward embrace of the Syrian regime.

First, Russia gave the green light in January for Turkey's Operation Olive Branch against the Kurdish People's Protection Units (YPG) in Afrin, Syria. (Turkey considers the YPG a terrorist-affiliated group.) Then earlier this month, the United States and Turkey agreed on a plan for the future of Syria's Manbij, a city the YPG controlled until recently. That future doesn't include the YPG, which had helped a US-led coalition's efforts to drive the Islamic State (IS) out of Syria.

Given that Syrian President Bashar al-Assad's forces helped the YPG fight Turkey in Afrin — an unexpected gesture that ultimately proved futile — it's not a complete surprise that the Kurds would consider turning to the regime under the current circumstances. Seeing their options limited, Kurds sent out the message: “We are ready to negotiate with Damascus.” And they did not turn away a delegation Assad dispatched in early June to Syrian Kurdistan.

A Kurdish source who spoke with Al-Monitor on condition of anonymity said Kurds will now disregard entities intent on dividing Syria and will hear what Damascus has to offer.

Kurds also say they don't really understand the Ankara-Washington accord. Turkish Foreign Minister Mevlut Cavusoglu and US Secretary of State Mike Pompeo said June 4 they had reached preliminary agreement on a road map for Manbij. Turkish Chief of Staff Hulusi Akar said Turkish and US military officials also met regarding the Manbij plan June 12-13 in Stuttgart, Germany, and submitted a tentative agreement to their higher-ups.

Once a starting date is established, “YPG will withdraw in 30 days," Cavusoglu said. "After 45 days, the US and Turkey will begin controlling the town and a local administration will be set up by local elements." But US officials have been much more vague with their explanation. "We’re committed to doing this as quickly as we can, but we can’t attach a specific time frame to it," one said in a briefing.

Cavusoglu also has said plans call for dissolving the Manbij Military Council, which effectively controls the town now. Turkey believes the council is a cover for the YPG's presence. Ankara isn't convinced by assertions that, after IS was driven out of Manbij, the YPG handed over control to the council and withdrew its military advisers.

But Aldar Khalil, who is co-chair of the Movement for a Democratic Society (Tev-Dem), the multi-ethnic governing coalition of Syrian Kurdistan, said the YPG is already gone.

“The YPG is not in Manbij; they have left. There were some military advisers, but we withdrew them also. The Manbij Military Council is in charge. It also represents the local population. We don’t think the US will dismantle the council; that is pure propaganda by [Turkish President Recep] Tayyip Erdogan," Khalil told Al-Monitor.

Some Kurds also believe Turkey might have grander plans for its presence in Manbij and Syria than it lets on. But Khalil said if that's the case, Ankara will find the going rougher now than it did in Afrin.

"Turkey can't expand its operations; its economic situation is not conducive to it,” he said. “In Afrin, Russians helped the Turks, but Russians have no influence over Manbij. [Turks] won’t be able to repeat what they did in Afrin. But Syrian regime forces can advance to Manbij. We will invite the regime if our dialogue with Damascus makes progress. The regime can then enter Manbij."

There have been other developments that could affect the Kurdish road map. Officials from Saudi Arabia, the United Arab Emirates and Jordan visited the area May 29 under the control of the Kurdish-dominated Syrian Democratic Forces (SDF), an umbrella group that includes the YPG. According to reports, this delegation met with the YPG at Qamishli and then met with representatives of Arab forces such as Senadid, Al Nukhba and the Raqqa Revolutionaries at a US base in Harab Isk village near Kobani to discuss forming a Sunni Arab force in the area.

According to Turkey’s state-run news outlet Anadolu Agency, liaison offices were set up at Hasakah and Qamishli to enlist volunteers for that new force; they will be paid $200 per month.

Concurrently, Assad made a comment that was interpreted as either a call for new negotiations or a proposal of war.

“We will use two methods in the SDF issue. First, we are opening the door for negotiations. If negotiations don’t succeed, then the Syrian army will have to liberate all the territories that the SDF has occupied,” Assad said.

How do Kurds interpret all these developments? Tev-Dem's Khalil doesn’t see a dialogue with the Syria regime as deviating from the Kurdish autonomy project. “Conditions have changed. It's time to find a solution with Damascus,” he said.

By "conditions," he means how Russia allowed Turkey a free hand in Afrin, Turkey’s propensity to want more in Afrin, the increasing tendency of the United States to appease Turkey and the possibility that the Kurds could lose the gains they made at Manbij. Khalil said that in negotiations with the regime delegation, the Kurds didn’t raise any preconditions such as pursuing the Democratic Federation of Northern Syria project, or the futures of the SDF and the YPG. The Kurdish intention is to first study the regime’s proposals and achieve the democratization of Syria through negotiations.

Many parties are advocating negotiations, but the Kurds want the regime's assurance of sincerity and seriousness. As Syrian Foreign Minister Walid Muallem said, there are no official negotiations at the moment. “We haven't started negotiations. We haven’t tried any options yet. There is communication, but no negotiations for the future. We see [Kurds] as Syria nationals who are concerned with the situation of their country,” Muallem said.

Khalil said solutions must be forged among Syrians and not outside forces, which "have their own plans and goals."

"Why can’t we look for a solution between ourselves? We told the regime delegation we are ready. Assad, Muallem and Assad’s adviser Bhouthaina Shaaban all reacted positively. The Geneva [peace] process is stuck. Syrian people are not represented there. We are on the field, but we should be at the table too. We are ready for that."

The United States has resumed its anti-IS operations, which were interrupted by Turkey's Afrin operation. Washington is considering plans to expand the SDF with Arab fighters. How could a dialogue with the regime go on when there is talk of a new Arab force? What do the Arab partners of the Kurds in the SDF say to this dialogue with the regime? Have the situations at Afrin and Manbij weakened the bargaining power of the Kurds? What do Kurds expect from this dialogue? Will there be red lines or preconditions in negotiations?

On the reaction of the United States, Khalil said Kurds dealing with Manbij and Deir ez-Zor are in touch with the Americans. "But we didn’t discuss with Americans our dialogue with Damascus. That will be our decision,” he added.

As for Arab attitudes about Kurds, Khalil said, “We have good relations with most Arabs. They generally approve of our project. They, too, say Syria cannot remain as it was.”

But Khalil doesn’t think Arab forces can be deployed in the area. “I don’t think they will come. As to defending our borders, we don’t need [American advice], but our own effective structures. [IS] can attack again. If we reach an agreement with Damascus, there will be plans about the border defense,” he said.

Kahlil thinks the Kurds still have a solid hand at the negotiation table. “Our cards haven't lost their strength. We're still strong. We control 30% of Syria. We went as far as Deir ez-Zor. We are also strong politically. There is opposition left around. On the ground, only the Kurds and the regime exist. Our priority was to eliminate [IS]. We are coming to the end of it. The regime’s position has changed also. Turkish and Russian attitudes are not as before. This is why we say it is time for negotiations,” he said.

Are there are any red lines? Khalil said he doesn’t want to talk about that at this point.

“Let’s wait. Let the talks begin. That is when we'll voice our conditions. What we always say is that Syria must be democratic and recognize the language and identities of its peoples,” he said.