President Erdogan’s Syria plan has had unintended ramifications: Saudi Arabia and the UAE are now cozying up to the Kurds, the Kurds are uniting, and the Russians are guiding the solutions on the ground. 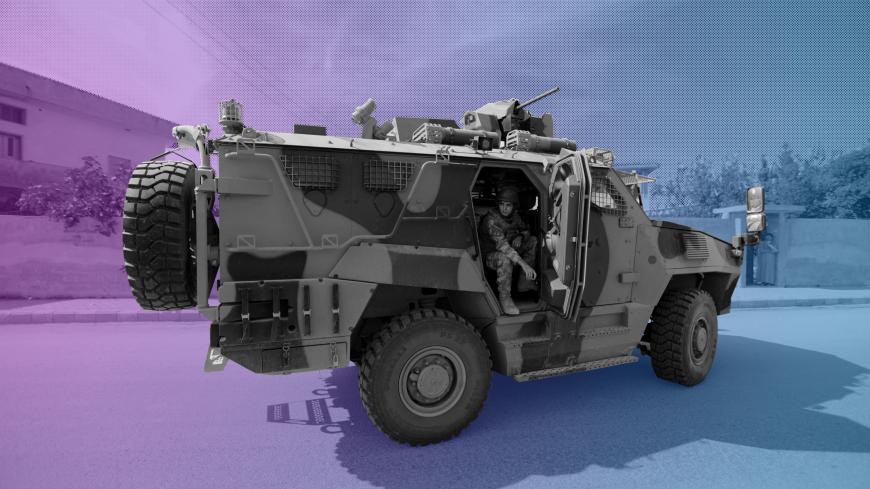 A Turkish soldier sits in a military vehicle in the town of Tell Abyad, Syria, Oct. 23, 2019. - REUTERS/Khalil Ashawi

Turkey did not gain more turf in its Operation Peace Spring. Instead, the operation instigated developments Ankara wanted to avoid. For instance, Saudi Arabia and the United Arab Emirates, which are engaged in a proxy war with Turkey in places like Libya, have improved their ties with Iraqi and Syrian Kurds. The Kurds, meanwhile, have regressed on the ground but gained new diplomatic channels. Next, the Kurds are making headway in their cooperation with Russia and the Syrian regime. Finally, rival Kurdish parties that had split in 2011 are now seeking ways to come together again.

President Recep Tayyip Erdogan had several military goals: to eradicate the Autonomous Administration of North and East Syria and all its components; to establish a safe zone of 32 by 180 kilometers (20 by 112 miles) along the border; to build housing for 2 million refugees in that zone.

But it didn’t work out that way. Thanks to agreements signed with the United States and Russia, the Syrian Defense Forces (SDF) withdrew 32 kilometers from the border, except at Qamishli. Turkey’s control was limited to an area of 32 by 120 kilometers, which covers Tell Abyad and Ras al-Ain. In Manbij, Kobani and Jazeera, Russian police forces and local units provide security, not Turks. Americans handle the territory that extends from Derik at the border to Qamishli, Hasakah and Deir ez-Zor, which is also the main US supply route. The Syrian regime army made a deal with the SDF to return to the border area it had abandoned in 2012.

Erdogan was hoping to use territorial domination to bargain for political gains, and he did not want the Syrian army to return to the border until he had achieved his goals. Erdogan is now using all these cards to isolate the People’s Protection Units (YPG) and the Democratic Union Party (PYD), which form the backbone of the SDF.

Certain developments have contradicted Turkish expectations. SDF commander Mazlum Kobane emerged on the diplomatic stage for the first time, making an agreement with the United Nations in Geneva in June. He is now focusing on foreign relations. Turkey could have blocked President Donald Trump’s invitation of Kobane to Washington, but instead the move opened the way for the Gulf to engage the Kurds. The last week of November, an SDF delegation had a meeting in Abu Dhabi. Then, another SDF delegation visited Riyadh upon the invitation of the Saudi government. SDF representatives also traveled to Egypt and Jordan for meetings.

SDF sources did not respond to Al-Monitor's questions about those visits and their participants. Yet a source in Iraqi Kurdistan told Al-Monitor that the delegations included senior-level figures. Kobane “headed the team that went to Abu Dhabi. Ghassan Youssef, the local administration chief of Deir ez-Zor, was included in that delegation. [Kobane] was also included in the delegation that went to Saudi Arabia," the source said. Another source said the contacts were not managed by Kobane but by SDF public relations official Redur Khalil and YPG press officer Mustafa Bali. SDF sources, however, did not confirm these reports.

The United States, while expanding its operations against the Islamic State, tried to make use of traditional Saudi connections to incorporate the Arab tribes in Raqqa and Deir ez-Zor into the SDF. Due to Turkey’s conflict with the Saudis and the UAE, those Gulf countries began to attach more importance to Kurdish issues and to give more support to the Kurds. Saudi Arabia’s Gulf affairs minister, Thamer al-Sabhan, visited Raqqa and Ain Isa Oct. 17. In May 2018, a military team from Saudi Arabia, Jordan and the UAE was also in the area for meetings with Syrian Kurdish groups. Sabhan visited Deir ez-Zor a second time in June and asked for Arab tribes to support the SDF.

The UAE was among the countries that reacted negatively to Operation Peace Spring. Its foreign minister, Anwar Gargash, called for concrete steps to prevent Turkey from “massacring Kurds.”

Egypt, which is fighting a cold war with Turkey because of its support for the Muslim Brotherhood, has maintained easy relations with the Kurds. Egyptian dictator Abdel Fattah al-Sisi lashed out at Erdogan in response to the operation, and Kobane thanked Egypt for its support.

Nechirvan Barzani was again in Abu Dhabi on Nov. 9. The UAE’s consul general at Erbil, Ahmed al-Zahri, met Dec. 3 with Massoud Barzani, who is the head of the Kurdistan Democratic Party.

On top of this diplomatic traffic, three cargo planes from the UAE landed at Erbil in December. According to al-Mayadeen, Iraqi sources said the planes full of weapons bypassed Baghdad and headed for Erbil. The report said it wasn’t clear if the weapons were intended for the SDF or the Kurdish peshmerga.

While Kurdish officials in Syria refused to comment, a source close to their autonomous administration spoke to Al-Monitor: “It is possible that some of those weapons were given to peshmerga while the rest were given to the SDF in Syria. That is the way it works. Anyhow, the international coalition doesn’t give the SDF their own weapons. They are instead supplied with arms obtained from the coalition’s Gulf allies.”

In 2012, with the mediation of Massoud Barzani, the KNC and TEV-DEM, which was the driving force of autonomy in Syria, signed an agreement to share the autonomous administration, but the agreement couldn’t be implemented. The United States — to overcome Turkey’s concerns with the YPG — raised the possibility of deploying Rojava peshmergas that were organized parallel to the KNC in northern Syria. Although Turkey had treated the KNC more favorably, it did not want unity between the two rival organizations but to wipe out the entire autonomy structure.

Parallel to foreign contacts and developments among Kurds themselves, the balance in the field is being reshaped. The Kurds began a dialogue with Damascus when the United States announced it was pulling out and as the Turkish army deployed in Syria. Yet this dialogue was clogged after the Americans decided to stay to protect the oil. Following contacts with the Russian military and diplomatic delegations, a new accord was reached with the Kurds. Following the meetings at Amuda between Kobane and Russian Gen. Alexander Chayko, the Kurds and Russians agreed to deploy Russian forces at Amuda, Tell Tamir and Ain Isa.

Ongoing clashes in Tell Tamir and Ain Isa, despite a cease-fire, made this accord possible. Russia had taken over the bases the Americans had evacuated at Manbij, Tabqa and Sarrin, and began using the Syrian army base at Qamishli and making military shipments via the M4 highway.

Kobane said they attached importance to the Russian role, stating, “We were honored to host Gen. Chayko. We are impatiently waiting for joint efforts to the benefits of our two countries.”

In initial contacts with Damascus, the Kurds agreed to the deployment of the Syrian regime army along the border. The full deployment of the Syrian army to areas abandoned by the SDF has not been realized. Signs of a new rupture may be seen in the latest Russian and Kurdish declarations that “there is no option apart from negotiations with Damascus.”

The increased dominance of the Syrian regime army means Erdogan’s dreams have not been fulfilled. Ankara may also be glad that the situation is eroding the basis of Kurdish autonomy. Turkey, with its significant influence over Erbil Kurds, is capable of disrupting Kurdish unity efforts. But the Saudi-UAE bloc's approaching the Kurds worries Ankara. Turkey feels that these Saudi-UAE efforts are actually designed to make Turkey fail.

YPG spokesman Nuri Mahmoud told Al-Monitor that while they were looking for “solutions compatible with the territorial integrity of Syria, they also want good relations with all their neighbors, including Turkey.” But he noted their reservations: “The Gulf countries are opening up to Kurds because of their tensions with Turkey. Naturally, there is also the American pressure. Nobody is concerned to find a solution to the Kurdish issue. They are using the Kurds for their own interests. Kurds are in the midst of these contradictions. They are carrying out a cold war [through] us. The Syrian regime doesn’t have its own free will but is under Russian and Iranian influences. Turkish, American and Russian leaders all have their own interests.”

The real concern among Kurds that remains unvoiced but is shared privately is this: The ongoing process could make Kurds hostage to proxy or influence wars among a multitude of power centers.