Will a Turkish-sponsored army of 50 Arab tribes actually materialize in Syria, or is Turkey just rattling its saber regarding the Raqqa offensive? 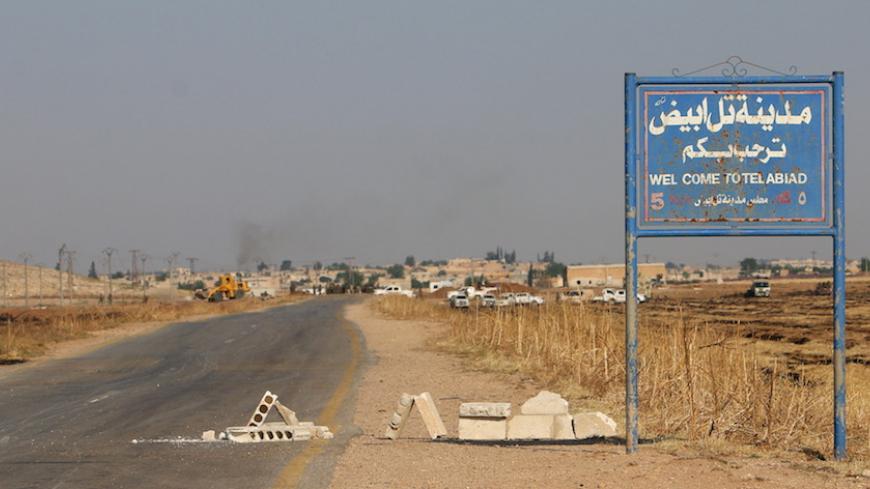 A view shows the eastern entrance to the town of Tell Abyad of Raqqa governorate, June 15, 2015. - REUTERS/Rodi Said

It sounded dramatic: The leaders of 50 Syrian Arab tribes met in Sanliurfa, Turkey, and announced they would set up the Army of Al-Jazirah and Euphrates Tribes to end Russian and Iranian occupation of Syria and cleanse the Euphrates and Al Jazeera areas of the Islamic State (IS), the Kurdish nationalist Democratic Union Party/Kurdistan Workers Party (PYD/PKK), Hezbollah and Syrian President Bashar al-Assad.

Sheikh Rafi al Raco Ukla represented the Shaitat tribe. In his opening speech at the March 14 meeting, he thanked Turkey, Qatar and Saudi Arabia for their assistance and added, “The US supports the PYD. The PYD is not different from [IS]. They deported many families from their homes in more than 50 villages.”

It's not clear which tribes actually attended the meeting and who some of those 50 representatives really represented. Some of the tribes at Hasakah and Deir ez-Zor have already sent troops to fight with the mainly Kurdish, US-backed Syrian Democratic Forces (SDF) as the United States is preparing for an operation in Syria to take Raqqa from IS. On Jan. 17, representatives of 28 tribes around Raqqa had organized a press conference at Haci Ali village to declare their support for the SDF.

Ahmad al-Jarba, the former head of the Syrian National Coalition, has announced he will be participating in the Raqqa operation with 3,000 of his men under the SDF banner. Jarba, who hails from the Shimir tribe, has set up a group he calls Syrian Elite Forces. Several tribes including Shaitats have sent fighters to join this force.

From the outset of the Syrian crisis in 2011, such reports have frequently popped up in headlines along with scenarios predicting Assad would not survive more than two months. Such wishful thinking evaporated. So what is this report of a new army under Turkey’s sponsorship all about?

“It is not possible to say that those attending the meeting were real Syrian tribal representatives,” a local journalist who observed the meeting in Sanliurfa told Al-Monitor. “Most of the people introduced as tribal leaders don’t even live in Syria. Among them were some who were tried in Turkish courts for smuggling. They did try to look like a powerful, large gathering. But it was no different than the earlier ones. Many observers say intelligence services were behind the meeting. You could see that from the security measures around the meeting.”

Sanliurfa province, with its large Arab population, was the staging ground in 2012 for preparations to launch a proxy war against the Kurds when they claimed the Jazeera canton. Arab tribes met on Dec. 23-24, 2012, after declaring they had established the Jazeera and Euphrates Liberation Front, and two months later actually participated in clashes against the Kurdish People’s Protection Units (YPG) at Serekaniye. They did try to change the situation on the ground with the support of Turkish intelligence, but it didn’t work.

The March 14 meeting of Arab tribes at Sanliurfa is Turkey's most recent attempt to alter power balances, not only with Kurds in Rojava (the Democratic Federal System of Northern Syria), but in all of Syria. It is obvious that the Turkish government, which keeps insisting it will "be in the field and at the table in Syria,” maintains its feverish desire to have a say in Syria.

This tribal show of force cannot be analyzed independently of recent developments in Syria, such as:

Two simultaneous developments attracted notice in this complicated atmosphere. First, the Turkish government, which could not attune its demands with those of the United States and Russia, displayed its spoiler effect at peace talks in Astana, Kazakhstan. Syrian opposition groups that participated in the Feb. 15-16 meeting under Turkey’s prodding did not send their negotiators to the March 14-15 meeting. Chief Syrian delegate Bashar al Jaafari claimed Turkey had blocked the opposition from attending.

Second, the tribes were convened at Sanliurfa parallel to the Astana process. The decision to set up a new army was Turkey's warning that it could deadlock the negotiations if its sensitivities are not taken into account. The target of the message was not only the Kurds but also the Americans, who persist in partnership with the Kurds, and Russia, Iran and the Syrian regime they support. Nevertheless, nobody really sees that message changing anything on the ground or making Turkey the playmaker in Syria.

If the tribes had that potential, they would have formed such an army long ago. Last spring, for example, there was an announcement that an "Army of the North" would be set up with Turkey's support. Nothing came of it. Even today, the force of local militants put together for Operation Euphrates Shield hasn’t evolved into an army, despite all the command, control and support supplied by the Turkish Armed Forces.