Ankara looks beyond Raqqa offensive for fate of northern Syria

The Turkish government is worried about how the Democratic Union Party will transform northern Syria once the Islamic State is defeated in Raqqa. 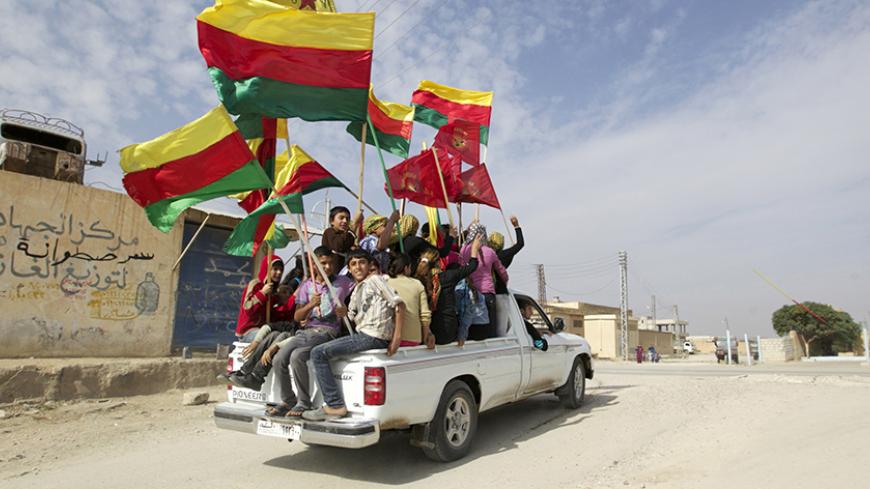 People sit in the back of a truck as they celebrate what they said was the liberation of villages from Islamist rebels near the city of Ras al-Ain, Syria, Nov. 6, 2013. - REUTERS/Stringer

Prior to the May 16 meeting between US President Donald Trump and Turkish President Recep Tayyip Erdogan in Washington, Turkey had sought for a year to pressure Washington to make a final decision on whether it would cooperate with Turkey in northern Syria or whether it would opt to ally with the People’s Protection Units (YPG).

Of course, Turkey had hoped the United States would prefer to cooperate with its NATO ally rather than the YPG — a sub-state actor and the military wing of the Democratic Union Party (PYD), which is affiliated with the Kurdistan Workers Party (PKK). The United States, however, adamantly maintained over the past year that it did not have to make such a choice, and Ankara could not devise a new road map that would persuade the United States to ally with Turkey east of the Euphrates. Now, the United States feels it can preserve its relations with the YPG — even elevating such relations with the upcoming Raqqa offensive — while keeping Ankara at bay. This may not be as easy as Washington seems to think.

Last week, I had a series of meetings in Ankara with government and security officials on behalf of Al-Monitor, and I was able to gather the following impressions. Both the government and the security bureaucracy in Ankara see the Islamic State (IS) as an internal and border security issue, yet they consider the PYD a political structure that could rapidly transform into a state. They see its military wing, the YPG, to be on the verge of becoming a standing army with conventional capabilities, thus making it an existential and imminent security threat to Turkey. In short, when it comes to northern Syria, Ankara is preoccupied with the YPG threat, not the IS threat.

This may explain the statement issued by the National Security Council following their May 31 meeting: “The meeting emphasized that the policy of support of the US for PKK/PYD/YPG terror organizations that operate under the guise of Syrian Democratic Forces in contravention of Turkey’s expectations is not compatible with friendship and being allies.”

That same day, Foreign Minister Mevlut Cavusoglu issued what sounded like a last-minute warning and called on the United States to refrain from arming the YPG. By saying that such a move would be tantamount to threatening Syrian territorial integrity, Cavusoglu insinuated that the YPG and PKK are seeking to establish a Kurdish zone in Syria.

Another important impression Al-Monitor obtained from its Ankara contacts was Turkey's shift in geographical focus in Syria. It is understood that Ankara — with the anticipated Raqqa offensive — has shifted its attention to the Kobani canton. A result of this shift is a renewed intensity of Turkish military moves on the Suruc-Akcakale front line that faces the Kobani canton. The Turkish military continues to intensify its moves opposite the Kobani canton, indicating that Ankara sees the PYD’s presence — not its actions on the ground — as an existential threat.

Ankara is debating three different approaches to combating the YPG:

Most likely, Turkey will opt for a combination of the second and third approaches.

The grim reality is that untangling the Turkey-PYD-US conundrum east of the Euphrates will determine the settings that come after the offensive against IS and Raqqa. As the IS threat diminishes after the Raqqa offensive, it's critical to keep an eye on how the PYD and the YPG adapt to the emerging political and military scenes. Turkey will have to carefully monitor how the PYD develops its relations with local and international allies. In the post-offensive setting, we will see if the PKK’s and PYD's perceptions of their strength in northern Syria are realistic. The dominant understanding in Ankara is that the PYD doesn’t have structured relations with the United States and Russia, and that those countries will abandon the PYD to its fate in northern Syria. Ankara expects that one day there will be problems between the YPG and the United States.

Ankara also hopes that a power struggle will eventually erupt between the PYD-controlled Rojava and the PKK’s strategic command in the Qandil Mountains in northern Iraq. Ankara is aware that these two bodies appear to be monolithic at the moment since they have a common goal. After the Raqqa offensive, their goals and strategies will diverge. For example, although the PKK is a violent nonstate actor, Rojava is rapidly moving toward statehood: The PYD rules a territory that it has to take care of daily, and for this, it must set up a government to control the territory and to provide services to the population. The PYD’s only window to the outside world is the Turkish border. Ankara seems to be aware of the PYD's dependence, hence Ankara’s hope for a radical change in the hierarchical relationship between Qandil and Rojava. Many wonder if one day this expectation will distance the PYD from the PKK and open the way toward a “PYD normalization,” if only at low levels. Can this normalization be transformed into the PYD cooperating more strongly with ENKS? If, following the Raqqa operation, the PYD decides to forge closer relations with ENKS and the two agree to share the governance of Rojava, how will Ankara will respond?

After the Raqqa operation, the PYD will have to cope with the challenges and problems that stem from coming out from under PKK tutelage and transitioning from an organization designed to combat IS. In turn, Ankara will have to develop policies and visions with a new regional power instead of a mere militant force.

At the end of the day, the major issue is: A Turkish government that doesn't have well-planned PYD policies will militarize that policy in its view of the PYD as an existential threat. Many in Ankara now insist that the PYD presence east of the Euphrates is a grave threat that must be eradicated. This mindset means new crises to manage for the United States after the Raqqa operation.