KRG, PKK make unlikely allies as they battle IS together

Often contentious Kurdish factions in Syria and Iraq are setting aside their differences to unite in fighting the Islamic State. 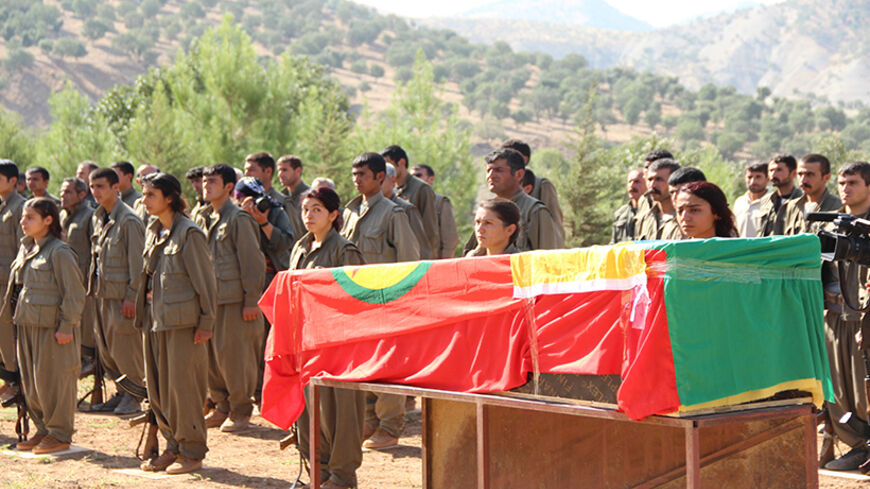 PKK soldiers stand at attention at the funeral of Deniz Firat, a PKK journalist who was killed by IS in Makhmur, south of Erbil, while filming PKK guerrillas fighting IS, Aug. 9, 2014. - Kamal Chomani

Attacks led by the Islamic State have brought together all Kurdish forces who are, for the first time in modern history, joining efforts to protect the people.

Diyar Qamishlo, representative of The Syrian Kurdistan's Democratic Society Movement (TEV-DEM) in Iraqi Kurdistan, told Al-Monitor that in the past three years since Rojava’s revolution started, PYD was able to form three cantons. On the other side, KDP-S and KDP accuse PYD of ruling Rojava unilaterally.

“We helped the peshmerga forces and rescued them from death. We did this wholeheartedly as we believe this was what people expected us to do,” said Qamishlo.

Ali Hussein, KDP’s member of the Leadership Council, did not hide his party’s concerns about PKK. He told Al-Monitor, “We have had relations with PKK since the 1980s and we have had common ideas, but we have also had differences. The problem of PKK and PYD is that they are not coordinating with other parties in Rojava. They should share power with them, but of course we have appreciated the collaborations.”

Sa’di Ahmed Pira, a PUK politburo member, is optimistic that the changes in regional political dynamics will strengthen the relations with the Kurdistan Regional Government, including KDP, and PKK. He told Al-Monitor that PKK and YPG military support for peshmerga forces in fighting IS had already been agreed upon.

Last year, the KDP dug a long trench between Iraqi Kurdistan and PYD-controlled areas of Syria. At that time, the trenches were considered as a “betrayal” by pro-PKK media and loyalists. Pira said that these events will not return, because “the ones [KDP] who dug the trenches are now filling them after being assured that YPG forces will not be a threat. IS had one positive [effect], which is that it brought us all together.”

Hitherto, PKK and YPG forces have taken part in fighting against ISIS in the three front lines: Jalawla, Makhmour and Sinjar. Soon after the IS attacks, YPG joined peshmerga forces and helped rescuing them and hundreds of thousands of Yazidis who had been stranded in Mount Sinjar.

Despite that peshmerga has better weaponry than YPG and PKK guerrillas, the latter have been more successful in fighting IS.

Salah Dilmani, brigadier of Ballak 118 Brigade, who has led the fighting against IS in Jalawla frontline, highly appreciated YPG and PKK support of peshmerga. Dilmani told Al-Monitor of his happiness about PKK’s intervention and showed willingness to continue these military collaborations. “We should not be ashamed that YPG and PKK forces are much more skillful in fighting against IS, undoubtedly, they have very good experiences.”

Though the number of PKK and YPG forces has not been revealed, some have been suspicious about their wishes to control Sinjar. Osman Ocalan, a former PKK leader, doubted that PKK wanted to create a Sinjar Canton and settle its power in the area. To remove these concerns, Hageed Damhat, PKK’s spokesman, said that the PKK “has no wishes to create any cantons for Sinjar or control the city. We just want to help people escape from death; we want liberation of the city and nothing more.”

But Diyar Qamishlo of YPG did not hide that Shingali people have formed the Sinjar Protection Units, which were affiliated with the YPG. He said, “But these people have been organized to stop IS attacks, not to control the town for us. They decide what they will do, not us.”

Mohammed Ali, a member of the Gorran Movement Political Room, spoke to Al-Monitor about KRG and Rojava relations and the future of these relations.

“In the past few years, the policy of KDP has dominated KRG’s position toward PKK and Rojava, which I condemn. It is obvious that KDP’s policy has been in favor of the Turkish authority rather than the interests of the Kurdish nation. Therefore, the relationship between KRG-PKK should be institutionalized and nationalized. The policy of KRG’s institutions, especially the parliament, government and presidency of the region, should reflect the interests of the Kurdish nation rather than the interests of one party or group,” Ali elaborated.

Accordingly, Aliza Marcus, author of “Blood and Belief,” a book on the PKK, expects that this current conflict in Iraq is going to improve the PKK's respect among Kurds in Syria and Iraq. “For Iraqi Kurds in particular, the PKK's willingness to support people under IS attack was very important. Now that [KRG President Massoud] Barzani himself has met with the PKK and thanked them for the efforts, he will come under more pressure to go ahead with a national congress.”

Marcus, unlike others, does not think the KRG-PKK relations improved after IS attacks “The PKK and KRG will never be the closest of friends. There's a lot of violent history and mistrust between them. But it will be very hard in the future for the KRG to criticize the PKK's presence or block the PYD in Syria. The KRG needs the PKK right now, and the PKK has proven its commitment to Kurdish nationalism by sending fighters to help.”

Dilmani believes that “KRG is forced to be closer to PKK and build healthier and better relations, as the current situation has proven PKK’s strength and security collaboration.”