How deep is Turkey's Sinjar entanglement? 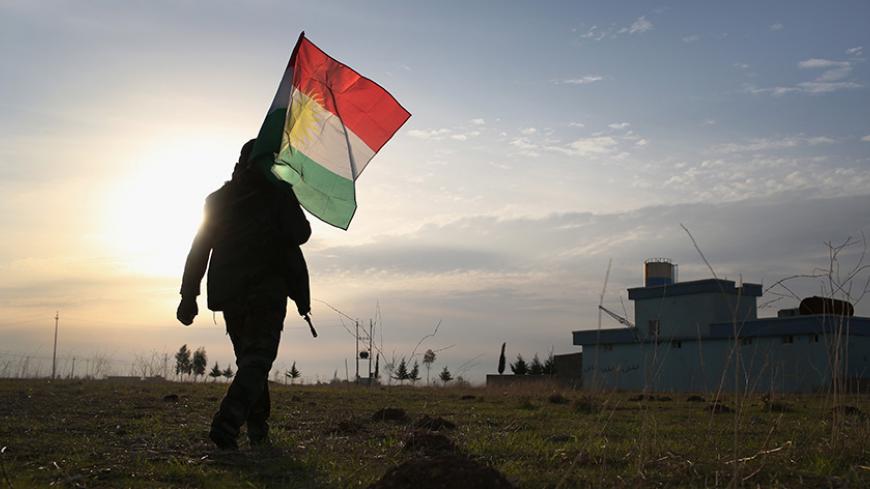 A peshmerga soldier walks to plant a Kurdish flag near the front line with the Islamic State in Sinjar, Iraq, Nov. 16, 2015. - John Moore/Getty Images

Turkey, which has developed rather odd relationships with some of its neighbors in recent years because of its reckless foreign policy, has begun treating Kurdish notables coming from Iraqi Kurdistan as official leaders.

According to former Turkish Consul-General at Erbil Aydin Selcen, when Kurdistan Regional Government (KRG) President Massoud Barzani used to come to Turkey, he was received in Istanbul and not in Ankara, the capital. The meetings were not held in palaces but at less-impressive locations. The Kurdistan flag was never displayed. Meetings were held in Arabic, not Kurdish. To give the impression that the meetings were unofficial, nobody wore ties. In short, everything was done to prevent the meetings from being interpreted as recognition of Kurdistan.

Nowadays, Barzani is received as a reputable state leader and the Kurdistan flag is hoisted next to the Turkish flag. During his latest visit Feb. 27, the official reception menu in Ankara was printed in Kurdish. While Turkey adheres to combative relations with Kurds inside and outside the country, relations with Barzani are based on economic interests such as oil and Turkey’s design to use Kurds against Kurds.

For a while now, Barzani has been goaded into a policy of balancing Rojava’s leading political party, the Democratic Union Party (PYD), and its military arm, the People's Protection Units (YPG), with Syria's pro-Barzani Kurdish National Council (KNC) and the peshmerga of Rojava (officially the Democratic Federal System of Northern Syria). In Iraq, Turkey expects Barzani to oust the outlawed Kurdistan Workers Party (PKK) from Sinjar. Turkey fears the PKK will turn Sinjar into an operations base to facilitate access between Syria and Iraq.

Following Barzani’s latest visit to Turkey, Syrian Kurds organized by Barzani’s Kurdistan Democratic Party (KDP) under the name of “Roj peshmergas” were sent to Sinjar March 2. The Yazidis' Sinjar Resistance Units (YBS) in Iraq, trained by the PKK, did not allow them to enter. Clashes erupted and there were casualties on both sides.

According to information provided to Al-Monitor by journalist Ali Dagli, who was in Sinjar, tension broke out when front-loaders sent by Roj peshmergas started digging trenches between Hanesor and Sinune. A group of local women tried to stop the machinery. The angry women said they don’t trust the peshmerga and asked why they were digging in places where the Islamic State (IS) no longer existed. Why didn't they instead go to the front lines to fight for Mosul, they asked.

On March 3, tension turned to clashes. A cease-fire was arranged within hours, but tension persists. During the cease-fire, the peshmerga brought more vehicles and increased their strength to about 500 fighters. The YBS interpreted the reinforcements as preparation for battle and told the Roj peshmergas they wouldn't be allowed passage. “Roj peshmergas want to capture Hanesor, make it a base for themselves, and sever the connection between Sinjar and the Rojava border,” Dagli said.

In Sinjar's town center and in Sinune, the YBS maintains checkpoints just as Iraqi peshmerga forces do. The YBS controls Hanesor. Between Sinjar and Sinune, there is a small Iraqi police presence and two battalions of Shiite militia (Popular Mobilization Units) near the Arab village of Madiba. There are around 100-130 fighters of the PKK’s People’s Defense Forces (HPG) to support the YBS in Sinjar. The road to Hanesor is important for providing a connection between Sinjar and Rojava territory.

Local sources believe that within the Roj peshmergas there are both Iraqi peshmerga forces and Turkish intelligence personnel. Renowned Yazidi sociologist Azad Baris blamed both the KDP and the PKK for exploiting the fragile situation.

“Many Yazidis are grateful to the YPG and the HPG. Many don’t trust the KDP anymore after what happened in 2014," when thousands of Yazidis were massacred by IS after the KDP allegedly abandoned them. "Yazidis are also uneasy with the Sunni leanings of peshmerga. But some of them cooperate with the KDP for monetary or political reasons. Moreover, there is a Yazidi unit under Qasim Shesho that is backed by the KDP. They incite the YBS by asking what Turkey’s Kurds are doing in Sinjar. The ratio of non-Yazidis in the YBS is not more than 5%,” Baris told Al-Monitor.

He added, “Some of them have come from places such as Hanover, Germany, but they are originally from Sinjar. In 2014, hundreds of Yazidis returned to Sinjar to defend their homeland and joined the self-defense forces. You can’t simply dislodge and send them away now. Some of them hail from Sheyhanli of south Kurdistan. The Iraqi central government recognized them as a legal force and began paying them salaries. There are now about 3,500. Every Yazidi has the right to defend his land. The question is with those assisting the self-defense forces — the pro-Apo [imprisoned PKK leader Abdullah Ocalan] elements. Their opponents say there is no place for pro-Apo ideology on this land.”

Barzani frequently declares that he won’t allow infighting among the Kurds. Sending Roj peshmergas instead of Iraqi peshmerga forces to Sinjar inevitably led to hostilities between pro-Apo Yazidis and Syrian Kurds. Some say Barzani, using this tactic, can claim he has kept his word on preventing internecine clashes while preventing his KDP from getting involved. But Roj peshmergas are not denying that they get their orders directly from Barzani and the Peshmerga General Command.

Baris said this situation — the KDP-supported Yazidis challenging PKK-oriented Yazidis and the PKK — is based on two main strategies: “First of all, there is the obvious tactic of instigating the local people to fight each other. The KDP has never really adopted the Yazidis because of their faith. Yazidis never feel safe. If Yazidis are split, then the KDP’s domination will be easier. Second, they are using the foreign Kurds of Syria to hit at other foreign Kurds from Turkey. They keep saying the YBS is a foreign force. I don’t want to dismiss the charges that Turkey has been influential, but keep in mind, whether Turkey wants it or not, Barzani’s intolerance is not limited to the PKK presence. He is also against the Yazidis' defending themselves and their aspiration for an autonomous structure. The KDP has never shared any of our pains and casualties and has never listened to any of our pleas. Even today they don’t listen to us. Anyone who prefers brutal hordes such as IS to Kurds and Yazidis and attacks our homeland will always be cursed by Yazidis.”

In 2014, when the PKK assumed the protection of the Yazidis after KDP peshmerga forces withdrew from the battlefield against IS, the pro-Apo ideology suddenly became the most prominent military and political entity of the area. The PKK’s military wing, the HPG, by blocking IS at Sinjar Mountain, and the YPG, by opening a corridor from Syria to Sinjar, practically saved the Yazidis. While the KDP couldn’t recover from its loss of credibility, the HPG organized the Yazidis and helped them set up the YBS. Although peshmerga forces eventually returned and lost hundreds of their fighters battling IS, Yazidis still stayed loyal to the PKK.

As for Turkey’s relevance in developments in Sinjar, the pro-PKK media keeps saying the attack against Sinjar was guided by Turkey and the Roj peshmergas who, they say, were actually members of Turkey's National Intelligence Organization.

Persistent declarations by Turkish leaders that Sinjar can't be allowed to become a second Qandil — the main Kurdish headquarters in the Qandil Mountains in northern Iraq — are naturally cited as confirming Turkey's role.

According to high-level diplomatic sources talking to Turkish media, Ankara continues to cooperate with Erbil (Iraqi Kurdistan's capital) against the PKK presence in Sinjar and in Makhmour, Iraq, and Turkey will intervene when the day comes. When the Mosul operation is concluded, then peshmerga forces will be able to transfer fighters to Sinjar and Makhmour. Should the Kurdish government want its help, Turkey will set up training bases around Kirkuk and in some northern areas.

In December, Turkey’s Deputy Prime Minister Veysi Kaynak declared, “We will never allow a new Qandil to emerge at Sinjar. Our biggest hope is for Barzani to succeed, but if that doesn’t happen we will do whatever is necessary with the Turkish army.”

Military action against Sinjar wouldn't be easy because the town lacks defined boundaries in military terms and could trigger even worse, bloodier strife between the Kurds. The Baghdad government would also see such action as an attack.

The United States and Russia don’t want the Kurds to fight each other, at least as long as the IS threat exists. The cease-fire at Sinjar was arranged by the United States. Iraq's central government is unhappy with Kurdish aspirations to take over more disputed territory, hence its support for the YBS. Baghdad, which had cut off the salaries of Yazidi forces last year, has resumed payments because of protests by Turkey, which didn’t want Yazidis to be dependent on the PKK.

Yazidi agony over the massacres suffered and the sale of Yazidi women in slave markets is resonating worldwide, and the first European assistance to the YBS is trickling in. One European Union member country sent the Yazidi self-defense forces 5,000 military uniforms. It's not going to be easy to end the conflict between the PKK and the KDP. For many people, avoiding bloodshed will be considered a sufficient success story.