Will Iraq's Sinjar become new base for PKK?

While the Kurdistan Workers Party (PKK) and Kurdistan Democratic Party are competing over Sinjar, the Yazidis dismiss fears of the PKK making it a "second Qandil." 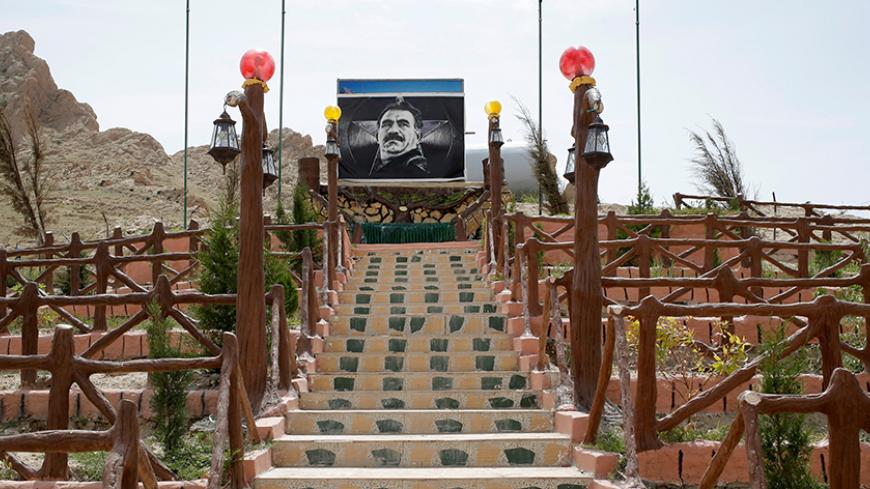 A picture of jailed Kurdistan Workers Party (PKK) leader Abdullah Ocalan is seen in a PKK mausoleum in the Sinjar region, northern Iraq, May 1, 2016. - REUTERS/Goran Tomasevic

In its quest to become part of the Mosul operation, the Turkish government has been warning that the predominantly Shiite volunteer Popular Mobilization Units will ethnically cleanse Sunnis from Mosul and its environs. But since that argument has not yielded the desired results of being able to intervene in Iraq, Ankara is now using the argument that the Kurdistan Workers Party (PKK) has turned Sinjar into a base. By declaring that “Sinjar is on the way to becoming a new Qandil, we cannot allow that,” Turkish President Recep Tayyip Erdogan has made Turkey’s position clear.

Turkey’s Chief of General Staff Hulusi Akar warned US Chairman of the Joint Chiefs of Staff Joseph Dunford of Turkey’s potential intervention during their Nov. 6 meeting in Ankara. According to a senior official who spoke to daily Hurriyet, Dunford said Turkey is justified to intervene in such a situation that concerns its national security.

This unidentified official explained Turkey’s position, which is to prevent the PKK from taking control of Sinjar and turning it into a logistics base that will provide access between Syria and Iraq. The question is whether the historical center of Yazidis in Sinjar is truly becoming a new base for the PKK, like Mount Qandil, and are Kurds really taking over control of the town?

The PKK presence in Sinjar did not begin on Aug. 3, 2014, when the Islamic State (IS) occupied the area. In fact, the PKK have been with the Yazidis for at least 20 years. After the occupation of the region by the United States in 2003, the Kurdistan Regional Government (KRG) attempted to annex Sinjar to Kurdistan by increasing the size of peshmerga forces, while the PKK intensified its efforts to expand its sphere of influence. About 8,000 peshmerga forces withdrew from the area without challenging IS in 2014, but the PKK’s armed wing, the People's Defense Forces (HPG), began fighting to open a corridor from the Sinjar Mountains, while Rojava’s People's Protection Units (YPG) began doing the same from the Syrian side. These moves boosted the PKK’s popularity among the Yazidis, while the KRG leadership under Massoud Barzani and peshmerga forces affiliated with the Kurdistan Democratic Party (KDP) suffered serious blows to their prestige when they were accused of abandoning the Yazidis to the murderous IS.

Later, to recoup its lost prestige and prevent expansion of the PKK, peshmerga forces became more aggressive. Although Barzani's government was able to obtain the backing of some notable Yazidi families and religious leaders, it couldn’t keep up with the PKK's popularity.

With the assistance of the HPG, Yazidis formed their own self-defense with the Sinjar Resistance Units (YBS) and the Sinjar Women's Units (YJS). The Sinjar Constituent Assembly was formed to handle civilian and political affairs. This assembly was successful in organizing their diaspora extensions and establishing relations with many international actors.

Also under PKK guidance, an academy named after legendary Kurdish fighter Dewrese Evdi was inaugurated, modeled after the PKK’s Mahsum Korkmaz Academy, which operated in the Bekaa Valley, Lebanon. The academy teaches political and social subjects. Most of the instructors are Yazidis who had once served with the Iraqi army under Saddam Hussein or worked with peshmerga forces.

Barzani's administration was considerably perturbed by the emergence of military and political alternatives beyond the KDP. His government tried to get the upper hand in the Sinjar area with its peshmerga forces — which included 4,000 Yazidis — and also set up a Yazidi women’s military force. But the perceptible increase in religious rhetoric and hate speech against the Yazidis is a cause for serious concern. The Yazidis more and more think that their future can be best assured not with Erbil, but with the central government in Baghdad.

When the central government recognized the YBS and the YJS as legitimate forces and started paying salaries to some of them during preparations for the Mosul operation, Erbil’s uneasiness grew. But Baghdad’s financial input was not adequate to start with. Journalist Seyit Evran of Sinjar told Al-Monitor that although Baghdad had promised to pay salaries to 1,000 people, it sent funds only for 500. This money was shared among 2,500 people serving in the YBS and the YJS, and even that was discontinued after three months. Local sources say the funding stopped after Baghdad and Erbil reached an agreement on participation of peshmerga forces in the Mosul operation.

After liberating the center of Sinjar together with the peshmerga forces, the YBS and the YJS continued fighting IS in villages. So far, the Yazidis haven’t taken part in operations against Mosul and Tal Afar, saying they are awaiting the call of the Baghdad government. Nevertheless, Yazidi forces see themselves as an integral part of the Mosul operation. After all, administratively, Sinjar is attached to the Mosul governorate.

The future of Sinjar continues to be the core of tension between the PKK and the KDP, and Yazidi settlements appear to be divided militarily and politically between these competing forces. Peshmerga forces and organizations following the PKK line are jointly controlling the center of Sinjar, and the HPG has headquarters both at the Sinjar Mountains and in the town of Sinjar. HPG militants wear their own uniforms, and in villages like Sinune and Hanesor — whose populations reach 30,000 — the YBS and the YJS appear to be in control. There is a dual administration, as both sides appointed their own district governors. Both parties operate their own checkpoints, and the YBS is stronger at Hanesor, where they control the district governorate and security offices. Rabia at the Syrian border is under joint control of the YBS and peshmerga forces, where both maintain checkpoints and mostly watch each other.

Sociologist Azad Baris, the chairman of the Yazidi Cultural Foundation, said after all the massacres they suffered under IS, the Yazidis are seeking strong guarantees that, in their opinion, can be provided by setting up an autonomous region with its own self-defense units and ensuring international protection to the region. Many Yazidis are afraid to return to their homes from camps they live in, because they still fear recurrence of massacres. Baris told Al-Monitor, “Because of the squabbling among the Kurds, Sinjar’s future is uncertain. They don’t want Yazidis to decide the fate of Sinjar. They don’t take the fears and demands of the people seriously. Everyone wants to create his own Yazidi. In the process, Jalal Talabani’s Patriotic Union of Kurdistan is lagging behind as the PKK and the KDP struggle [to dominate] Sinjar. Yazidis in peshmerga forces say after they get rid of IS, they may opt for autonomy. But people are sympathizing more and more to the PKK line. Many diaspora Yazidis also think they will be safer with the PKK. There are many who say their lives and properties will be protected by the KDP. True, they don’t trust the KDP, but they [are] also worried about what they see as communist propaganda by the PKK.”

Baris doesn’t agree that Sinjar is about to become a second Qandil. He said, “This analogy is not accurate. First of all, geographic and topographic conditions are different. You cannot make Sinjar a guerrilla base. On one flank you have flat ground and desert; on the other flanks there is a bare mountain. It may allow the Yazidis an adequate defense, but it can’t be a guerrilla base like the Qandil Mountains. Such claims are exaggerated and politically motivated. Yes, there is a PKK ideological presence, but what we want is to organize the Yazidis and provide them with means of defending themselves against a new massacre. The PKK doesn’t need a second Qandil. The PKK has been in Sinjar since 1993.”

Yazidi journalist Eyup Burc, who shares the views of Baris, told Al-Monitor, “This allegation that Sinjar is becoming a second Qandil is a Turkish propaganda invention. The KDP manipulates some of its Yazidi friends to say the same things. Politically and militarily, the PKK deserves to have more say in Sinjar. The KDP is uncomfortable knowing the PKK gets the credit for opening a lifeline against IS for the Yazidis. The KDP is reminded of its treason of leaving the Yazidis to the mercy of IS. I think there will be some kind of international protection of Sinjar. Nobody will hand over Sinjar to the PKK, but the PKK will always remain as a major element in the region. The PKK cannot give up Sinjar, because Sinjar is the gateway to western and southern Kurdistan. The PKK has always been in the world of the Yazidis. I see the solution as an internationally protected Yazidi area that will enable the Yazidis to return to their homes.”

Evran said, “Wherever it goes, the PKK installs a culture of resistance. This is what Turkey is afraid of. After the HPG entered the picture at Sinjar Mountains on Aug. 3, this culture has been flourishing. Especially the youth and women are joining self-defense forces. The PKK has no need to create another Qandil here.”

Although Sinjar topographically may not be conducive to guerrilla operations, with the turbulences of recent times, the PKK has been able to become more visible and effective in a crescent from Hanekin on the Iranian border to central Iraq’s Mosul and Kirkuk. When you look at it from inside Iraq, it doesn’t look all that easy for Turkey to reverse such a flexible and dynamic process just by massing tanks at the Silopi border.