Kurdish forces celebrated a joint victory at Kobani, but they have become rivals in the fight against the Islamic State in the Mount Sinjar area. 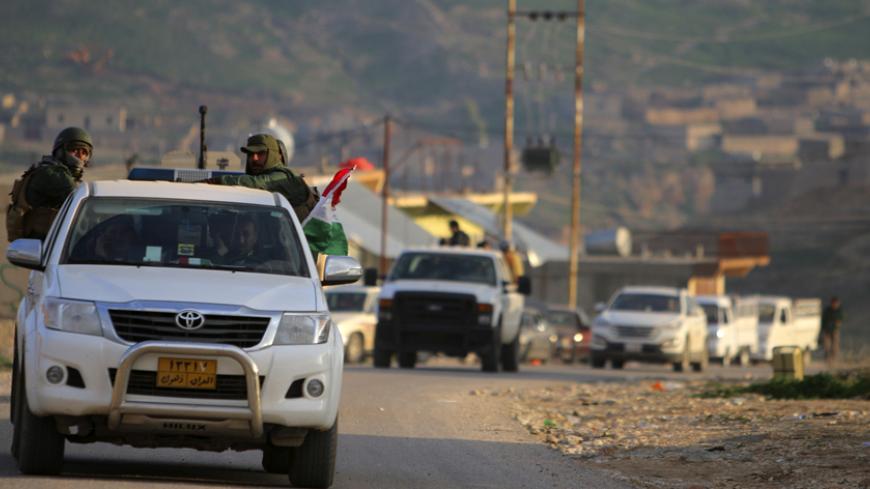 After the liberation of Kobani from the Islamic State (IS), which was achieved following a 134-day Kurdish resistance, the focus is now on Mount Sinjar, the Yazidi area on Iraq’s border with Syria. Cooperation between Kurdish forces in Kobani in the Sinjar region has been replaced by bitter rivalry, which is delaying the liberation of the area.

Yazidis, who speak Kurdish, live in various settlements on the foothills of the Sinjar Mountains, about 120 kilometers (74.5 miles) west of Mosul. While roughly 300,000 Yazidis live in Iraq, it is estimated — exact figures are not available — that the number of Yazidis totals 700,000-800,000 worldwide including those living in Syria, Turkey, Germany, Russia, Belarus, Armenia and Georgia. For the Yazidis, who have been under pressure for a long time to convert or at least to submit to the established order, the Sinjar Mountain range is their only refuge.

Former Iraqi President Saddam Hussein had forced the evacuation of the villages in the foothills of the Sinjar Mountains by moving the Yazidis to settlements called "mucemma." Sinjar, which was referred to by the 2005 Iraqi Constitution as a disputed area whose status had to be defined with a census and referendums, had come under the Kurdish peshmerga forces after the US invasion in 2003 and regained its Kurdish identity. But the identity conflict in the Arab, Kurdish and Yazidi triangle was never reconciled. The Kurdish-language courses that the Kurdistan Democratic Party (KDP) organized in Sinjar were strongly criticized by the Baathist Yazidis.

On Aug. 3, 2014, unexpected disengagement of peshmerga forces from clashes with IS in Sinjar seriously tarnished the prestige of the president of the Kurdistan Regional Government (KRG) and the chairman of the KDP, Massoud Barzani.

Barzani now wants to return as the liberator of Mount Sinjar, but he has no intention of sharing the glory with the rising star of the region, the Kurdistan Workers Party (PKK). Barzani also does not want Yazidi self-defense forces under control of the PKK to be an alternative to his peshmerga forces.

Barzani launched on Dec. 19, 2014, an offensive to liberate Sinjar, a week after the Yazidis celebrated the holy day of Cejna Ezi, which is observed every second Friday of December.

When Barzani went to the Sinjar Mountains on Dec. 21 to declare victory, the villages that had been under intermittent IS control were in the hands of Kurdish forces, but only 25% of the Sinjar town center was liberated at that time. The People's Defense Forces (HPG), the PKK’s armed wing, when realizing that the peshmerga forces had acted without informing them, mobilized its women's force, YJA Star; Rojava’s People's Protection Units (YPG) and its women's wing, YPJ; the Sinjar Resistance Forces (YBS) and its women's wing, YBJ Star, which was trained and armed by the PKK; and other Yazidi popular defense units.

The incomplete Sinjar operation lowered the credibility of the KDP among the Yazidis. Subsequently, an argument erupted about giving Sinjar area the status of canton.

Barzani’s KDP feared that a canton might be an alternative to the existing structure, under PKK guidance, and vehemently opposed the idea. The Yazidis, on the other hand, insisted on self-governance and their own defense forces to prevent further massacres.

On Jan. 14-15, 210 Yazidi notables met at the Sinjar Mountains and declared the establishment of a constituent assembly, whose current 27 members will total 80 after the refugees return.

Yazidi self-governance and self-defense demands go back to 2004-2005, when non-KDP Kurdish movements had approved of giving priority to the Kurdish identity of the Yazidis. In three meetings held in Mosul, the consensus was that unless the Yazidis organize their own governance and self-defense, massacres would repeat. This led to the formation of the Yazidi Democratic Movement (TEVDA) in 2005 to follow up on the demands, and the PKK had considerable influence on this process. The Yazidis wanted US weapons assistance. The newspapers Ki Tigris and Saniye Spi were established with US funding. The KDP intelligence service that perceived these activities as threats sent warning messages to the Yazidi delegates and even detained some them.

Today, the KDP strongly condemns the self-governance decision and is holding the PKK responsible for the developments. Sociologist Azad Baris, leader of the Yazidi Cultural Foundation and a delegate to the meetings, told Al-Monitor, “The PKK was involved but did not lead the way as it did in 2004-2005. Among the participants were known Yazidi names from the Kurdish Patriotic Union, Yazidi Communist Party, Progressive Yazidi Party, European Yazidi Federation and Yazidi Cultural Foundation. Their aim is to give Sinjar autonomous status and build administrative bodies with the help of Kurdish actors. Nobody even mentioned a canton or an independent entity. Yazidis know they are at the point of no return. Anyone who stands against this current cannot be our friend, no matter what his name, race and ideology may be. After this point, we will never accept domination by anyone. The KDP [Barzani] has to understand that old ways will not work any longer. Nobody wants the KDP. If one day our refugees return and elections are held, the PKK will gain more than 70% of the vote.”

An official of the HPG force at Mount Sinjar told Al-Monitor about the problems with the KDP. "Kurdistan military officials don’t want a second armed force to emerge under PKK control. They told us, ‘If we don’t lead the liberation operation and if you don’t behave as guests, we won’t enter into a joint operation with you.' In fact, dialogue between the groups fighting is excellent but politicians are preventing joint action.”

Nobody so far has spoken of relations with the central Baghdad government, although according to the Iraqi Constitution Sinjar is associated with Mosul.

Safin Diyazi, KRG spokesman, when asked by Al-Monitor why the KRG reacted so strongly to a canton model for the Sinjar area and whether the KRG has another model in mind, said governance of Sinjar cannot be dictated by the PKK or any other outside party. He said it is true that the PKK as a Kurdish group contributed to the fighting but that does not entitle it to impose its will on the people. He said that there is an elected Kurdish parliament and government, and an Iraqi Constitution that determines the road map and rights in the region.

Rivalry and heated arguments disrupted the preparations for joint operations in Sinjar. While Kurdish forces advance step by step, 40% of the town is still in IS hands.

The HPG official said, “I don’t expect a joint operation any time soon. Clashes continue in the field. It is a matter of time before Sinjar is liberated from IS, because the central government and Kurdish forces are preparing for a major assault against Mosul. If there is such an operation at Mosul, IS cannot send reinforcements. IS is losing blood. They are now [operating] in smaller groups. Their military strength is not what it was at Kobani.”

Asked why the Kurdish offensive against IS at Sinjar is proceeding so slowly, Diyazi said, “Sinjar is far from the KRG-controlled zones. There are many Arab settlements in the way. A corridor was opened up to Mount Sinjar over a month ago but there was no plan to enter the town. The immediate surroundings had to be cleared of IS to encourage people to return. Moreover, the security of Sinjar is also linked to the liberation of places such as Tal Afar and even Mosul itself."

Asked if there are any new preparations to liberate the region and cooperation between peshmerga and Kurdish forces such as the HPG, YPG and YPJ, Diyazi said, “The peshmerga have taken the initiative and are in a better position. However, there has to be a much more comprehensive plan of action to regain control of the Iraqi territory from IS. This cannot be achieved by peshmerga forces alone. The federal army, Sunni tribal groups and the coalition has to participate."

As things stand now, even if Sinjar is liberated from IS, the area will continue to be the scene of a struggle for political and military domination between rival Kurdish forces. The unity they forged at Kobani is still far away from Sinjar.