How are Iraq's Yazidis faring amid Kurds' confrontations?

Turkey’s bombing of Yazidis' Sinjar homeland deepened the argument between the Kurdish Democratic Party and the Kurdistan Workers Party. 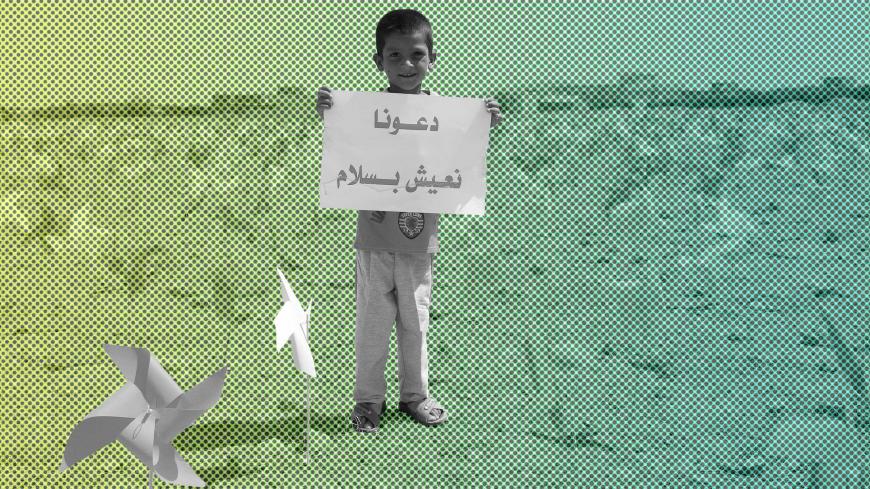 A Yazidi child holds a sign that reads "Let us live in peace" as he stands among colorful pinwheels that represent the living souls of Yazidi women held captive by Islamic State militants, near Sharaf al-Deen temple in Sinjar's outskirts, Iraq, Aug. 14, 2016. - REUTERS/Ari Jalal

The Islamic State (IS) genocidal invasion in 2014 of the Yazidi homeland in Sinjar, Iraq, and recent Turkish air attacks have deepened fissures in the Kurdish political map. Forces are playing two Kurdish segments against each other: the Kurdistan Workers Party (PKK), which Turkey considers a terrorist group, and the Turkey-friendly Kurdistan Regional Government (KRG). The Yazidis are caught in the middle. Ethnically, Yazidis are Kurds, but for centuries their religion has set them apart and made them targets for persecution.

After the 2003 collapse of Saddam Hussein's Baath Regime in Iraq, the Yazidis faced the choice of joining the administrative boundaries of Kurdistan or seeking an autonomous entity for themselves. The KRG, which deployed its peshmerga in the disputed area after the 2003 US occupation, sees Sinjar as part of its territory. But in 2014, when 7,000 KRG peshmerga forces withdrew from Sinjar instead of battling IS — leaving the Yazidis to suffer massacres at the hands of IS — the PKK’s popularity saw a meteoric rise.

While peshmerga forces abandoned the fight, the PKK’s armed wing, the People's Defense Forces (HPG), fought to evacuate the Yazidis to the Sinjar Mountains. The Syrian Kurdish People's Protection Units (YPG) fought to open an evacuation corridor to save thousands of people from IS slaughter. Having lost its standing at Sinjar, the Kurdistan Democratic Party (KDP) of Massoud Barzani and his KRG could not react to the PKK’s creation of the Yazidis' Sinjar Resistance Units (YBS) and the political and civil body, the Sinjar Constituent Assembly.

These developments became serious concerns for Turkey. Ankara felt that Sinjar was becoming a new Qandil, that a new access route was opening for Rojava — the area in northern Syria run by the Kurdish nationalist Democratic Union Party (PYD) — and that Iraq and Iran were encouraging a new force to challenge Turkey’s interests.

Turkey’s threats that it won’t allow Sinjar to become a second Qandil — the PKK's main headquarters in Iraq’s Qandil Mountains — have provided the KRG with potent cards to play against the PKK presence in the region. The KRG argues that unless the PKK leaves Sinjar, Turkey will continue its attacks and the Yazidis will pay the price. In its counterargument, the PKK says the IS threat has not passed; therefore, it cannot leave Sinjar.

The KDP’s dispatching of peshmerga forces in March from Syria to Sinjar to re-establish its presence only ratcheted up the KDP-PKK conflict. The KDP subsequently justified the Turkish air attacks by saying, “The main reason for these attacks is the PKK presence in the region. The PKK must leave soon.”

The Yazidis are not immune to such squabbles. Al-Monitor has learned that the Yazidis resent being forced to become part of intra-Kurdish strife. Those who believe that such rifts are bound to harm the Yazidis, such as Sinjar Mayor Mehma Halil, favor a PKK withdrawal. “Turkey and the PKK will be held responsible by history because they compel the people of [Sinjar] to migrate again. The goal of the Turkish bombings was to force the evacuation of [Sinjar],” he said.

Those who favor the PKK’s withdrawal have another fear: Turkey’s offensives have been eroding the return of the Yazidis who had fled from IS in 2014. The Yazidis do admit their gratitude to the PKK, but say the IS threat is not over and they definitely need their own self-defense force.

After the 2014 massacres, about 3,000 Yazidis took up arms with the YBS; another 1,000 joined Haydar Sesho’s KDP-affiliated Sinjar Defense Units (HPS).

Ibrahim Osman lived in Sinjar for 10 years and wrote the book “Evina Merxaseki” on the Yazidi folk hero Dewrese Evdi. I asked him how Yazidi politics are affected by Barzani's peshmerga forces, the struggle with IS and Turkey’s bombardment on April 25.

“Yazidis, who are always abandoned, don’t trust anyone. After the IS massacres, Yazidis decided to determine their own destiny and set up self-defense forces,” he said.

Osman assessed Yazidi reaction to the Turkish airstrikes. “All Yazidis are furious. Forces affiliated with the PKK are not only at [Sinjar]. They are everywhere from Kirkuk to Xanekin. There must be something else behind attacking a few PKK people at [Sinjar]. Many Yazidis interpret it as a sequel to the unfinished IS plan to exterminate the Yazidis. A few PKK people at [Sinjar] are here for training and protection, and they don’t pose a threat to Turkey,” he said.

Osman also referred to Turkey’s constant warnings that Sinjar is on the verge of becoming a second Qandil: “[Sinjar] has no political, military or logistical features that would help set up a second Qandil. [Sinjar] has nothing in common with Qandil, which is based in the mountains of Iraq. [Sinjar] is like an island in the middle of the ocean with no contiguous territory. For the PKK to adopt such a strategic plan would be military suicide.”

Osman added, “The KDP-PKK conflict did not start at [Sinjar] and will not end there. That is an ideological, class conflict. Yazidis don’t want to be a party to their archaic, hegemonic clashes. Yazidis want the KDP and the PKK to refrain from using the Yazidis as a tool in their argument.”

He then summarized the sentiments of the Yazidis, who are not well-known outside their community: “Apart from a few sheikhs and tribal leaders, Yazidis in general do not trust the KDP and want to have their own defense forces. But Yazidi institutions feel the need to ally with a political force to be able to survive.

Yazidis are not pleased with the KDP’s despotic approach, Osman said, adding, “You have to understand that the KDP’s Sunni and religious affiliations frighten the Yazidis. Just think: Most peshmerga won’t eat the food cooked by Yazidis and animals [they] slaughter because they are not Muslims in their eyes.”

The KDP’s calls for the PKK to leave the region are supported by a small Yazidi minority with economic interests in KDP affiliation.

And finally, Turkey has to take note that the Yazidis are deeply suspicious of Turkey’s motivation in bombing Sinjar. They see it as a Turkish design to prevent the Yazidis from returning to their land.

Another assessment came from sociologist Azad Baris, who has been active in Yazidi civil initiatives. He said the KDP-PKK tension had already raised signs of possible foreign intervention. YBS units expecting such an attack left their urban bases and took cover in the mountains. “The [Sinjar] air attack was the continuation of Ankara’s bankrupt foreign policy," Baris said. "Erdogan had multiple goals with this attack, primarily to achieve national accord in Turkey while denying Kurds their gains."

Baris said he believes the PKK's flourishing presence disturbs Turkey and the KDP. That is why Turkey's ruling Justice and Development Party and the KDP agreed on a joint enemy. “This problem will not be solved anytime soon, as parties won’t concede their positions and also because [achieving] unity of the Yazidis is a very long, tedious prospect,” Baris said.