Would Trump back Turkish military escalation in Iraq, Syria? 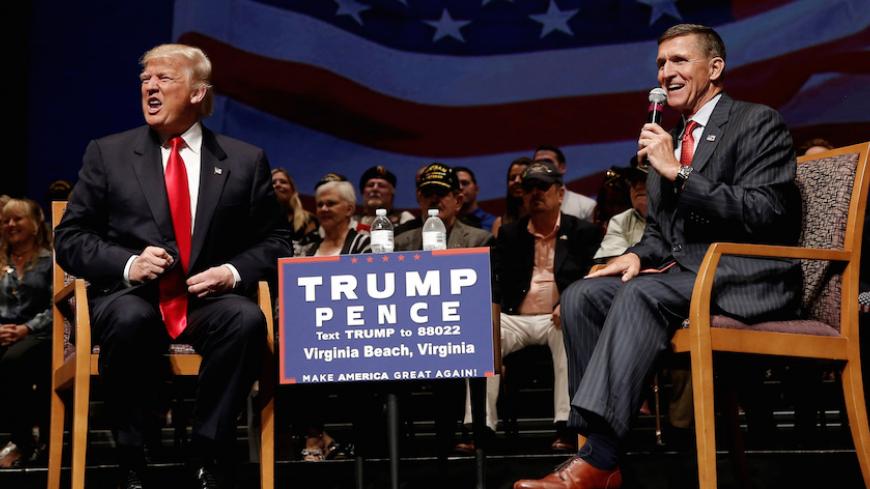 Turkish leaders are optimistic that the new Trump administration will adjust US “foreign policy to recognize Turkey as a priority … and to see the world from Turkey’s perspective,” as incoming national security adviser Lt. Gen. Michael Flynn wrote in an op-ed in The Hill published on US Election Day.

Metin Gurcan writes, “Many key names in Ankara believe that the Trump transition team will understand the dynamics of Iraq and Syria and support Ankara in its struggle against the PKK [Kurdistan Workers Party] and PYD [Democratic Union Party] in northern Syria and against growing Shiite influence in Iraq. It is not hard to guess that Ankara will focus on setting up good relations and thus increase cooperation with the Trump team until Trump’s inauguration Jan. 20. Erdogan's Justice and Development Party teams are already busy with diplomatic efforts in New York and Washington.”

Gurcan explains that Ankara’s “primary goal” in Syria is to “end Democratic Union Party (PYD) control of the Kobani and Jazeera cantons. … If Ankara cannot impose a full military presence east of the Euphrates [River], it will make do by cleansing al-Bab of the Islamic State (IS) and Manbij of the YPG [People's Protection Units], thus creating a rectangular buffer zone of Jarablus, Manbij, al-Bab and al-Rai.”

In Iraq, Gurcan writes, Turkey’s goals are to “become part of the Mosul operation and eliminate the PKK's domination of the Sinjar area that forms a bridge between Iraq and Syria. This would also mean splitting the PKK corridor from the Qandil Mountains to northern Syria. Ankara believes it is vital to split the Shiite corridors: one in northwestern Iraq and Syria, and the other from Syria to Lebanon. In other words, the worst-case scenario for Ankara is to be hemmed in by a Shiite corridor from Iran to Lebanon in the south and a PKK corridor from Qandil to Afrin in the north.”

Fehim Tastekin writes, “Ankara is now using the argument that the Kurdistan Workers Party (PKK) has turned Sinjar into a base. By declaring that ‘Sinjar is on the way to becoming a new Qandil, we cannot allow that,’ Turkish President Recep Tayyip Erdogan has made Turkey’s position clear.”

Tastekin explains the complicated role that Sinjar has played in intra-Kurdish politics: “After the occupation of the region by the United States in 2003, the Kurdistan Regional Government (KRG) attempted to annex Sinjar to Kurdistan by increasing the size of peshmerga forces, while the PKK intensified its efforts to expand its sphere of influence. About 8,000 peshmerga forces withdrew from the area without challenging IS in 2014, but the PKK’s armed wing, the People's Defense Forces (HPG), began fighting to open a corridor from the Sinjar Mountains, while Rojava’s People's Protection Units (YPG) began doing the same from the Syrian side. These moves boosted the PKK’s popularity among the Yazidis, while the KRG leadership under Massoud Barzani and peshmerga forces affiliated with the Kurdistan Democratic Party (KDP) suffered serious blows to their prestige when they were accused of abandoning the Yazidis to the murderous IS."

He adds, “After liberating the center of Sinjar together with the peshmerga forces, the YBS [Sinjar Resistance Units] and the YJS [Sinjar Women's Units] continued fighting IS in villages. So far, the Yazidis haven’t taken part in operations against Mosul and Tal Afar, saying they are awaiting the call of the Baghdad government. Nevertheless, Yazidi forces see themselves as an integral part of the Mosul operation. After all, administratively, Sinjar is attached to the Mosul governorate.”

Tastekin concludes, “Although Sinjar topographically may not be conducive to guerrilla operations, with the turbulences of recent times, the PKK has been able to become more visible and effective in a crescent from Hanekin on the Iranian border to central Iraq’s Mosul and Kirkuk. When you look at it from inside Iraq, it doesn’t look all that easy for Turkey to reverse such a flexible and dynamic process just by massing tanks at the Silopi border."

Also vital to Turkey’s interests is the strategic town of Tal Afar, west of Mosul, where Iranian-backed Iraqi paramilitary units — the Popular Mobilization Units — appear on the verge of retaking the city from Islamic State forces.

Hadi al-Amiri, the leader of the Badr Organization, rejected any Turkish intervention when he said, “Tal Afar will be the cemetery of Turkish soldiers should Turkey attempt to take part in the battle,” Mustafa Saadoun reports.

Control of Tal Afar is pivotal for Turkey and Iran, as well as the governments of Iraq and Iraqi Kurdistan. Saadoun explains, “Turkey does not wish for Iran to have influence in Tal Afar, which is adjacent to the border with Syria; it would make it easier for Iran to transfer arms through the land route it is seeking to establish from the east to the west of Iraq. This is also seen as one of the reasons behind the dispute over Tal Afar. Erdogan fears that Tal Afar, which lies 60 kilometers (37 miles) from the Turkish border, would become a haven for the Shiite factions close to Iraq. The Turkish president also has concerns over a possible alliance between the PMU and the Kurdistan Workers Party (PKK) in regard to attacks that could be launched on Turkey or a possible facilitation by the PMU of arms transfers to the PKK fighting the Turkish army.”

Return of the Iraqi Baath?

Joseph Briefel writes, “One group that remains absent from post-liberation narratives is the former Baathists, who have played a complex role in Mosul’s recent history and have had a dysfunctional relationship with post-2003 governments in Baghdad. If the role of former Baathists is forgotten in post-IS Iraq, then many of the key issues that arose when IS entered Mosul in 2014 will likely return in the future.”

He adds, “IS’ strong Baathist links gave the group a clear Iraqi identity and allowed it to make alliances with many other such groups upon its entry into Mosul. One of these alliances was with the Baathist-linked Naqshbandi Army, which is led by Ezzat al-Douri. When IS forces stormed into Mosul in June 2014, the Naqshbandi Army’s Baathist network largely facilitated their entry.”

Briefel explains, “Despite their ideological differences, the pragmatic secular nationalist Baathists are determined to acquire power by any means available and exploit any situation to their advantage. But for those that attempt to blend back into civilian life, what does the future hold? The Supreme National Commission for Accountability and Justice made amendments to the de-Baathification law Sept. 30, allowing many former Baathists to resume their jobs. As IS represents the greatest threat to Iraq and its people, national reconciliation must include all groups, including Baathists, to defeat it.

"Understanding Baathist networks are of paramount importance and the topic must be included alongside the more prevalently discussed issues of sectarian reconciliation, political autonomy and the role of external actors when addressing the drivers of social insecurity.”