A series of tit-for-tat incidents has worsened relations between the Kurdistan Workers Party of Abdullah Ocalan and the Kurdistan Democratic Party of Massoud Barzani. 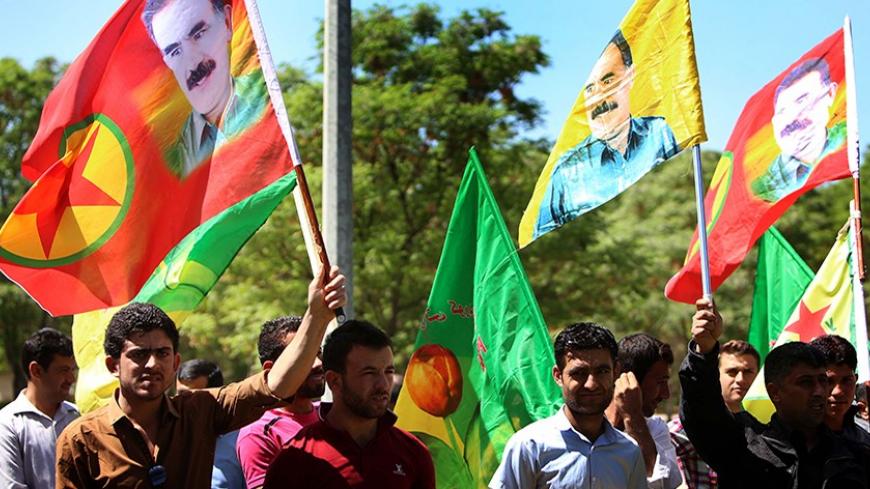 Iraqi Kurdish supporters of the Kurdistan Workers Party (PKK) hold flags bearing portraits of jailed PKK leader Abdullah Ocalan during a demonstration in Erbil against the decision by the Kurdistan Regional Government of Iraq to dig a trench along the border with neighboring Syria, April 12, 2014. - AFP/GETTY IMAGES/Safin Hamed

LONDON — The Kurdish parties in Iraq and Syria are increasingly engaged in a low-scale cold war. The new power vacuum in the Kurdish areas of Syria has led to an escalation of tit-for-tat arrests, political office closures, expulsions, demonstrations, media campaigns and border closures instead of more cooperation.

The imprisoned head of the Kurdistan Workers Party (PKK), Abdullah Ocalan, and the president of the Kurdistan Regional Government (KRG) of Iraq, Massoud Barzani, have competed over the leadership of the Kurds for decades. Ocalan’s party is the most powerful Kurdish nationalist party in Turkey, while Barzani leads the Kurdistan Democratic Party (KDP). The power vacuum in Syria has led to new competition between the two parties, after the PKK became the strongest actor in northern Syria.

On May 19, the Iraqi Kurdish security forces raided several offices and organizations close to Ocalan’s PKK in Iraqi Kurdistan in response to the arrests and expulsion of Syrian Kurdish politicians close to Barzani’s KDP by Kurdish forces in Syria.

“The KNK [Kurdistan National Congress] is a national organization for all parts of Kurdistan; it is not related to the PYD. Why do they capture these people, and close their offices?” Salih Muslim, the leader of the PKK-affiliated Syrian Kurdish party, the Democratic Union Party (PYD), told Al-Monitor in London.

As a result of these tensions, Syrian Kurdish security forces started to expel, arrest and deny entry to Syria of politicians of the newly established Barzani-linked Kurdistan Democratic Party of Syria (KDP-S). This also came after the digging of trenches on the Iraqi-Syrian border in April by the Kurdistan Regional Government of Iraq.

Bashar Amin, a KDP-S politician, was arrested in his house in Hassakeh and deported to Iraq in his slippers and pajamas on May 16. In a tit-for-tat response, the pro-PKK politician Nujin Yusiv was imprisoned for two days and deported from Iraq to Syria by the KDP’s security forces on May 21, despite having a residency permit for a year.

The PKK accused the KRG of dividing Kurdistan. “It shows that they don’t have a concern for the national unity [of Kurds],” Riza Altun, a leading member of the PKK, told Al-Monitor.

But Maj. Gen. Aziz Waysi, commander of Barzani’s 47,000-strong special forces, called Zerevani (Guards), in Iraqi Kurdistan, denied the accusations and told Al-Monitor in an exclusive interview that the Kurds are already divided historically by the Sykes-Picot borders: “We could make a Berlin wall if there were two Kurdish states [in Iraq and Syria]. But this isn’t true. If this was the case, I would be the first person to throw myself from this wall.”

He added, “They don’t want other [parties] to do activities in Syria, only the PYD. The only reason for the ditches is security.”

But the PYD suspects the KDP is using a border embargo to pressure the PYD to share power with Barzani-backed parties in Syria, and that this is unrelated to the security of the KRG.

This Kurdish cold war prevented the holding of a national Kurdish congress in September of last year and the creation of a united Kurdish administration in Syria.

The PYD, which is aligned with

the PKK, announced three canton administrations in January 2014 after an agreement failed between the KDP and PKK to have a united Kurdish voice at the Geneva II conference.

The PYD formed administrations with local Arabs, Christians and small Kurdish parties, while the Kurdish parties united in the Barzani-backed Kurdish National Council (KNC) joined the Western-backed Syrian National Coalition, rejecting the legitimacy of PYD institutions on the ground.

“They only give us permission to operate if we recognize the cantons,” senior KDP-S leader Mohammed Ismail told Al-Monitor in Erbil. He was referring to a new political party law that was adopted by pro-PKK Kurdish authorities in Syria in April. The law requires Kurdish parties to register to operate in the Kurdish areas, and also requires recognition of the PYD-led government.

The Barzani-supported Kurdish parties suggest they are ready for dialogue and to revive the 2012 Erbil agreement that proposed a jointly administered Kurdish region in Syria.

“The only condition we had is for the Kurds in Syria to work together and make decisions together. Not by one group (PYD),” Falah Mustafa Bakir, the KRG’s Foreign Relations head told Al-Monitor in Erbil.

But the PYD said this was too late. The PYD suggests the only option for the KNC is to recognize the canton administrations and register according to the political party law or face prosecution.

“The conditions have changed. Now we have democratic administrations in these areas. … Now we have Kurds, Arabs and Assyrians all together,” PYD leader Muslim told Al-Monitor in an interview in Brussels in January, referring to the suggestion from the KDP-S to return to the Erbil agreement.

The KDP-S suspects the law is a new way of pressuring the KDP-S to recognize the new administration.

“The problem is not that they do not recognize the political party law; they refuse all administrations. They do not consider the Asayish [security police] as a national force, but a PYD force. Even the YPG [they consider as PYD],” Muslim told Al-Monitor, in London.