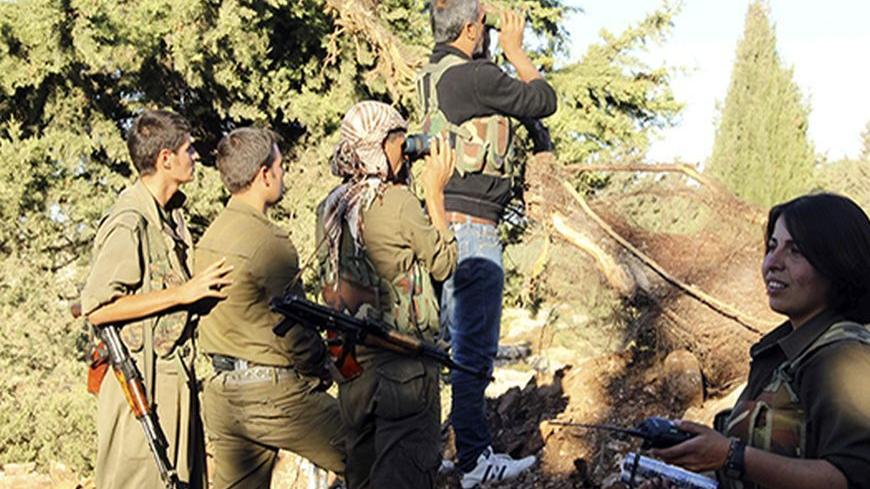 A Kurdish female fighter from the People's Defense Units carries a walkie-talkie as she stands near fellow fighters in the Kurdish town of Ifrin, in Aleppo's countryside, Oct. 14, 2013. - REUTERS/Roshak Ahmad

RAS AL-AIN, Syria — After discussions and debates over more than 10 months, four Kurdish political parties backed by Massoud Barzani, president of the Kurdistan Regional Government, decided to unite one week ago into a single party under the banner of the Kurdistan Democratic Party of Syria (KDP-S), currently led by Abdulhakim Bashar. The four parties are: the Freedom Party (led by Mustafa Cumma), Freedom Party (led by Mustafa Osso), Kurdistani United Party (Abdulbasit Hemo), and  KDP-S. The Democratic Union Party (PYD), backed by the Kurdistan Workers Party (PKK), however, remains the strongest Kurdish organization on the ground.

The Syrian Kurdish parties are sharply divided into several blocs. As indicated above, among them are those backed by or close to Barzani, who also heads the powerful Kurdistan Democratic Party (KDP), which recently won legislative elections in Iraqi Kurdistan, taking 38 of 111 seats.

A number of Kurdish parties work with the PKK-affiliated PYD, which is the only party in control of security organizations, the People’s Defense Units and the Asayish (Kurdish for "security"). This is due to the PKK’s insurgent background fighting against the Turkish government for almost 30 years.

“There are two key parties: the KDP [in Iraq] and the PKK. The other Kurdish political parties don’t have a lot of influence,” Ibrahim Birro, leader of the Kurdish Unity Party, told Al-Monitor in Erbil.

To solve the Kurds' political differences, on July 11, 2012, Barzani brought together the Kurdish National Council (KNC), which consists of 15 political parties, and the People’s Council of West Kurdistan, which includes the PYD/People's Defense Units, to form the Kurdish Supreme Committee. The goal was to prevent the kind of Kurdish civil war that the Iraqi Kurds experienced in the 1990s. Despite Barzani's efforts, however, the KDP proxy parties and PKK were unable to share power, and the KDP decided to back the Democratic Political Union, comprised of four PYD rival parties.

The PYD does not think the upstart organization will have much success on the ground. “They are already a member of the Kurdish Supreme Committee, but they are trying to make something different,” PYD leader Saleh Muslim, told Al-Monitor during a visit to Qamishli after the killing of his son Servan Muslim by a sniper in Ayn al-Arab, in Kurdish Kobane. “They are trying to create alternatives.”

Bashar of the KDP-S confirmed that the four Kurdish parties will form one party under his group's name and claims that the KDP-S has the most supporters in Syria. Bashar boasted, “We have thousands of supporters. We didn’t have any elections, but most of the people support the KDP-S. Nobody can be compared to us. The PYD only controls the area because of the People's Defense Units and the Asayish.”

The PYD has been highly critical of the Democratic Political Union and attempts by Barzani-backed parties to revive the old KDP-S, which was founded in 1957 and unified the PYD's rivals, but fragmented into a dozens of parties as a result of government repression and the influence of Kurdish parties outside Syria in the mid-1960s.

People's Defense Units commander Sipan Hemo recently criticized the formation of the new party in a letter dated Oct. 12 and accused it members of being involved in attacks against his group. He called on the parties to respect the People's Defense Units' struggle against the Syrian government and al-Qaeda. “When we saw the negative orientation of this union and new political situation, we were not optimistic about this new project. We could say that you worked many times as a Kurdish front … to stop the progress of the Kurds in Syria and conspire against the Kurdish case. Hemo added, “You harm us even more than our enemies, because you beat us from the back. You offer support to attacking groups. Especially in Tel Hassel and Tel Aran, you were like fateful soldiers of these groups who committed crimes against the Kurds.”

Despite the strong criticism of the Barzani-backed factions by the People's Defense Units, politicians from the PYD and other Kurdish parties doubt that the new party can do much to alter the current situation, in particular because they do not have a military force. “If you don’t have a defensive base on the ground, why should anyone take you seriously,” asked PYD spokesperson Jafaar Henan, who is based in Erbil, the capital of Iraqi Kurdistan.

Xelil Osman, a member of the PYD-affiliated TEV-DEM organization in Ras al-Ain (Serekaniye in Kurdish) also doubts the new group will make an impression. “They think with this aim: I bring a lot of members. ... But they cannot provide anything to the people and [they] represent only a part of the society.” Fuad Aliko, a prominent leader within the Kurdish Unity Party, also doubts that the party will meet with success. “They cannot be an alternative to the PYD. No one can be an alternative,” he asserted.

The Unity Party's Birro told Al-Monitor that initially the effort to unite the Barzani-backed factions had been an attempt to create a popular base. “Our thinking was to establish a big and popular party from the [Democratic Political] Union, ... but we couldn’t unify our offices and our small organizations, and we could not even unify the KNC.”

After six months, Birro's party left the Democratic Political Union, dissatisfied with the lack of progress toward unification and attempts by Bashar’s KDP-S to control the new organization. “We saw this as a unifying step, and we supported it as an idea, but we are not joining it at this stage.”

Salih Gheddo, leader of the Kurdish Democratic Left Party, which is close to the PYD, said it is difficult to create unity among the members of the KNC. “We are more than 14 parties, and this means 14 political programs. So there is a big problem.” Moreover, Gheddo pointed out, the party was established outside Syria. “The [Democratic Political] Union was established here [in the Kurdistan Region of Iraq]. We prefer it to be established in Qamishli, but in my opinion it is a good step if it continues.”

Birro is not optimistic about the current situation, because, he noted, “We have a history of bad relations. In the past we established a lot of unified parties, but in the end all of them failed.” He then speculated, “If we face elections and a political process, maybe we will face a different situation.”