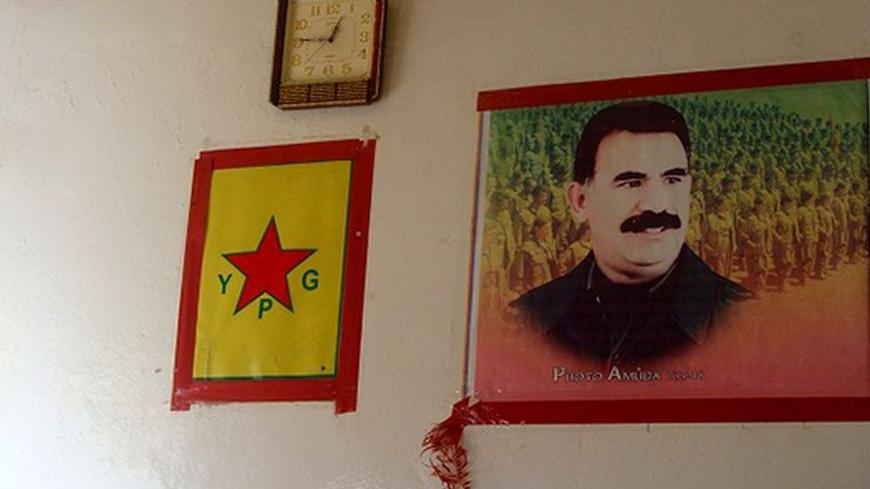 The YPG flag and a photo of imprisoned PKK leader Abdullah Ocalan are displayed in the house of a YPG fighter in Serikaniye, Oct. 12, 2013. - Wladimir van Wilgenburg

RAS AL-AIN — On July 17, Kurdish fighters expelled jihadist groups from the mixed city of Ras al-Ain, known in Kurdish as Serikaniye. Afterward, the fighting spread between al-Qaeda and the People’s Defense Units (YPG) in several areas of northern Syria. The fighting with radical Islamists increased the support for the YPG, despite its closeness to the Kurdish rebels from Turkey.

The YPG claims it is independent, but it is close to the Democratic Union Party (PYD) and the Kurdistan Workers’ Party (PKK). Nevertheless, the YPG sees itself as neutral, although pictures of imprisoned PKK leader Abdullah Ocalan are seen everywhere in YPG camps, and YPG fighters say they follow Ocalan’s philosophy.

“I can say that the YPG is not for one party or for one party’s benefit. It’s a necessity, because the troops that come to our land didn’t come for one party, for the PYD or others; they come to attack all the Kurdish land, people and culture,” YPG commander Militan Derik said of the Islamist rebels.

Speaking in Serikaniye, she told Al-Monitor, “We want to ask the other parties why they haven’t supported us. We need an answer to this.”  She was referring to rival Kurdish parties of the PYD who do not accept the YPG.

From Nov. 23-25, 2012, the Kurdish National Council and the PYD-affiliated People’s Council of West Kurdistan held talks and agreed to form a united Kurdish army, but immediately after the agreement became known, the YPG rejected it, and said it would only “unite with the people.”

The YPG sees other Kurdish militias as a threat. Derik said, “They have support from the KDP [Kurdistan Democratic Party] and Turkey to create another force in Rojava [Syrian Kurdistan], and they did that because of their own agenda."

Thus, after the agreement, other Kurdish parties hoped they could form their own militias, but many of their members were arrested and forcefully disarmed.

“When the Supreme Kurdish Council was created, we said we would be part of its military committee, but it’s not active yet,” said Anwar Asso, a member of the Kurdish Unity Party. Members of his Sheikh Mashuq Khaznawi Brigade were arrested in May 2013 and later released.

Massoud Barzani, the president of the Kurdistan Region of Iraq and KDP leader, trained militias inside Iraq comprised mostly of members of the Kurdistan Democratic Party of Syria (KDP-S). On May 18, 2013, PYD security forces arrested 74 trained members of the KDP-S trying to cross the Syrian border from Iraq. Afterward, out of frustration toward PYD policy, the KDP closed the border.

“We will never be part of [the YPG],” said Abdulhakim Bashar in Erbil. The leader of the Barzani-backed KDP-S said, "We offered to coordinate with their army in the Kurdish areas, but not under the name of the YPG."

But now even some supporters of PYD rivals are joining the YPG to fight against al-Qaeda out of fear of the Islamists. “A friend from KDP-S went by foot from Amuda to Mala Mustafa Barzani’s grave [in Iraq], and now he works with the YPG,” said Azad Evdike, a YPG fighter and member of the Kurdish media group MAFDAR.

Thus, despite the agreement to form a united Kurdish army, the YPG is increasingly seen as the only force among Kurds to fight against al-Qaeda. In Serikaniye, the PYD and the YPG used to be weak, but now they have support.

Serefedin Barezi, a tailor, said he had connections to the Free Syrian Army (FSA) and helped its members come to Serikaniye.

“When they attacked Serikaniye, I saw it was not liberation after I saw the crimes against the military security,” said Barezi, referring to an FSA execution of members of Assad's military. He claimed his group first fought against FSA brigades after seeing extortion, looting and executions by FSA groups and later joined the YPG with his group.

Former FSA fighter Mohammed Ahmed Heso also joined the YPG, although he initially helped the FSA. He said, “These people don’t want freedom; they are gangsters. If they want freedom, all the people of Serikaniye will support them, even the YPG.”

Civilians say that support has increased for the YPG. “They are respecting the YPG because they protected the people and saved us,” said Ahmed Hemo, a butcher in the town of Serikaniye. “We can see that [the PYD and YPG] are one. The people saw that after what happened in Serikaniye, even though many didn’t like the PYD, their ideology is the best. The others who didn’t protect the people, they are the wrong parties.”

PYD supporters are not the only ones with respect for the YPG. Mohammed Rasho, a member of the KDP-S who lives in Erbil, thinks the YPG is the protector of Kurds, saying, “In my opinion, most of the Kurds of Syria see the YPG as the protection forces of the villages against the Salafi attacks, and it can be considered a national force.”

Nevertheless, he doesn’t think the same about the Asayish, the semi-official police force of the PYD that operates inside the cities, while the YPG operates outside the cities.

“The Asayish … serves a particular partisan approach and makes a lot of mistakes,” Rasho said. Some blame the Asayish for arresting members of rival Kurdish parties.

Before the clashes started with al-Qaeda, the reputation of the PYD was damaged after the killing of six demonstrators in the city of Amuda and the arrest of several Kurdish activists and party members on June 27. Some suggest this was the reason clashes started, and the PYD announced a plan to form an interim administration.

After fighting erupted between Kurds and Islamists, even the people of Amuda changed their minds. Feridun Qico, a local Kurdish journalist and member of the Kurdish Unity Party, said, “You know about the national emotions in Amuda and the other cities. These are the consequences of what happened in the revolution and what happened in Serikaniye. That made the youth reconsider their opinions.”

“Those fighting were not only YPG, but also our friends,” Qico said. “I, as a person, I helped them using bullets, and the first donation of bread to Serikaniye came from me.”

Thus the fighting between the YPG and al-Qaeda increasingly legitimates the YPG as a Kurdish armed force and increased support for it.

Fuad Aliko, a leader inside the Kurdish Unity Party, says, “Kurds fear Jabhat al-Nusra and al-Qaeda, and think that the PYD is better than al-Nusra. All of us will be with the PYD if al-Nusra comes. I will fight against al-Nusra with the PYD if they come to Qamislo.”