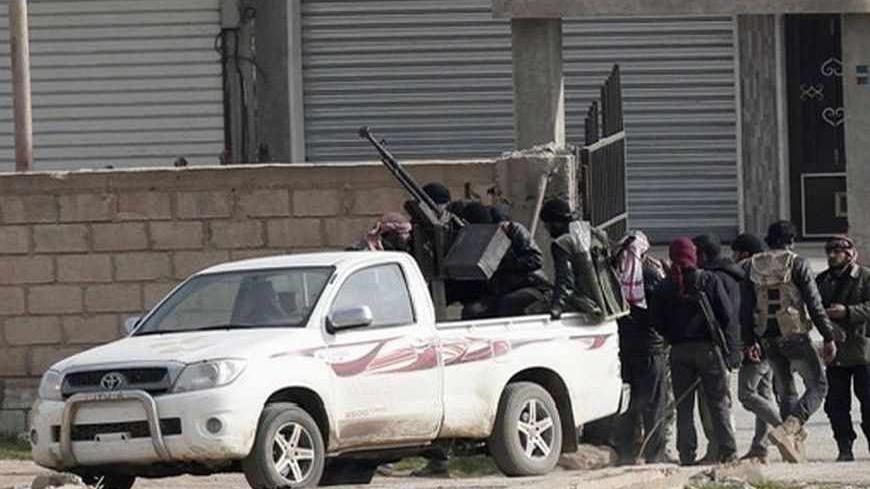 Members of the Free Syrian Army are seen in the northern Syrian town of Ras al-Ain, as they are pictured from the Turkish border town of Ceylanpinar in Sanliurfa province, Jan. 25, 2013. - REUTERS/Osman Orsal

On July 16, clashes erupted between the Kurdish People’s Defense Units (YPG) and the al-Qaeda-affiliated Jahbat al-Nusra, killing at least four Jabhat al-Nusra fighters in the city of Ras al-Ain, the Syrian Observatory for Human Rights reports. The clashes took place near the Mahatta neighborhood, controlled by Jabhat al-Nusra, and Kanais Street, controlled by the YPG.

The fighting follows increased domination of opposition-controlled parts of Syria by armed groups affiliated with al-Qaeda, which claim they are planning to set up Islamic emirates.

According to jihad expert Aymenn Jawad al-Tamimi, a Shillman-Ginsburg Fellow at the Middle East Forum who tracks jihad in Syria, the rumor that al-Qaeda affiliates such as the Islamic State of Greater Syria is planning to establish emirates is plausible.

In an email to Al-Monitor, Tamimi wrote on July 16, “In towns such as Jarabulus, where ISIS (the Islamic State of Iraq and Syria) has control, ISIS has declared an 'emirate of Jarabulus,' for instance. ISIS has an emir of northern operations: Abu Omar, (Chechen fighter) Jihad ash-Shishani who leads Jaish al-Muhajireen and was appointed by Abu Bakr al-Baghdadi in May.”

Moreover, there are reports suggesting that the Democratic Union Party (PYD) affiliated with the Kurdistan Workers’ Party (PKK), and close to the YPG, wants to form a transitional Kurdish administration in Kurdish-controlled enclaves within three months and hold elections within six months to form a local Kurdish government in Syria.

“If they are declaring Islamic emirates, why can the Kurds not form their own government? It would be moderate, democratic and non-fanatic, and benefit regional and international interests,” Alan Semo, a PYD spokesman, told Al-Monitor via Skype.

While the PYD follows the PKK’s Marxist ideology aimed at establishing autonomous Kurdish regions in Iran, Iraq, Syria and Turkey, al-Qaeda affiliates want to use the civil war in Syria to establish an Islamic state. As a result, several clashes took place between jihadist groups and Kurdish fighters.

In Arab villages, south of Qamishli, several fights broke out on July 12 between Syrian government forces and the Free Syrian Army (FSA), and the YPG warned both of them not to bring the fight to Qamishli.

Furthermore, the PYD accused Jabhat al-Nusra of having ties with Turkey and claimed to have captured three Tunisian al-Qaeda members in Efrin, in Aleppo province where fighting is taking place between the YPG and Islamist combatants. The YPG, in a statement, rejected any entrance of non-Kurdish forces.

“There is no truth in the arrest of Kurds in Ras al-Ain by Jahbat al-Nusra,” said the group, accusing the YPG of trying to restore its popularity after the incidents in the city of Amude, where several Kurds were killed in tensions between the YPG and Kurdish protesters on June 27 — in which at least six Kurdish civilians were killed.

But, on July 16, violent clashes took place between the YPG and Jahbat al-Nusra. “After (Jabhat) al-Nusra attacked a YPG Women's Defense Unit by the Bareed roundabout, they detained the YPG fighter who was driving the vehicle, and two female fighters managed to escape,” the UK-based Observatory said.

The Observatory said that the YPG managed to free their detained member and took over control of the Jabhat al-Nusra base in the political security branch and the Baath Party branch. “Sporadic clashes continue at the Shabiba base in the Mahatta neighborhood,” the nongovernmental organization said.

The city of Ras al-Ain, known in Kurdish as Sere Kaniye, was divided into two sectors controlled by either the PKK-affiliated YPG or the FSA and other Islamist brigades such as Jahbat al-Nusra, following an agreement reached on Feb. 17, following weeks of fighting after the town was taken over from President Bashar al-Assad’s forces.

Despite the agreement, from time to time fighting broke out between the two combatant groups. On May 25 and 26, clashes also erupted between the two groups, killing at least two YPG and four Jahbat al-Nusra fighters.

Tamimi told Al-Monitor that the fighting is not related to the differences of ideology between the PKK and al-Qaeda affiliates.

“It is competition for control of border access points foremost. I don't think the ideology so much plays a role, otherwise there would be constant conflict between the two.”

Nevertheless, despite these tensions, Kurds and the al-Qaeda-proxy ISIS coexist in the opposition-controlled town of Jarabulus, where fighting between ISIS and the FSA took place between June 13-16.

“Jarabulus is basically under ISIS supremacy, but they tolerate the presence of pro-PYD activists,” he added.

Charles Lister, an analyst at the Jane’s Terrorism Insurgency Centre, told Al-Monitor by email that clashes between the PKK and al-Qaeda are not surprising.

“Kurds and Islamists have maintained generally hostile relations in northern Syria since the YPG first emerged, and the two factions have frequently clashed in Aleppo and Hassakeh.”

He added, “The clashes also come as local sources have reported recent territorial advances made by both groups in parts of northern Syria. Incursions by Islamists into predominantly Kurdish areas has consistently led to tensions and often hostilities, and today’s clashes are likely to have been sparked by a similar move.”