Bitter enemies less than a year ago, the Kurdish Democratic Union Party and the Free Syrian Army are cooperating to fight the extremist Islamic State of Iraq and al-Sham. 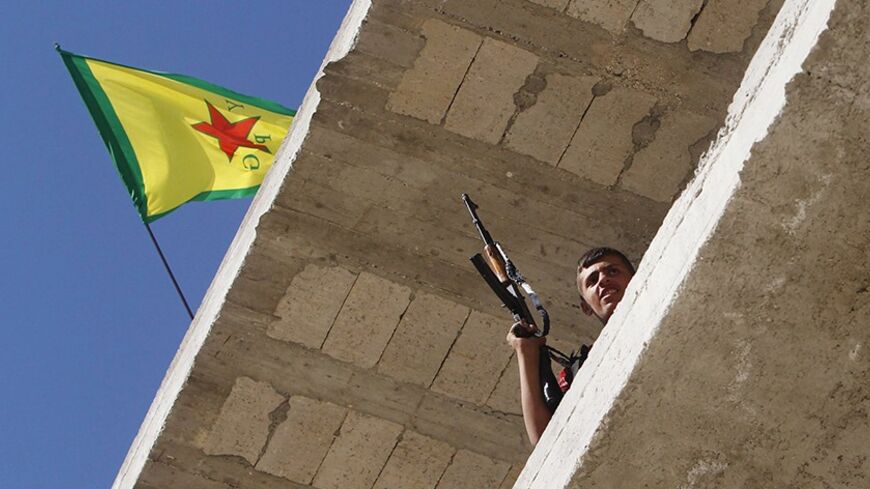 A Kurdish fighter from the Popular Protection Units (YPG) holds his weapon as he takes position atop a building with a YPG flag in Aleppo's Sheikh Maqsoud neighbourhood, June 7, 2013. - REUTERS/Muzaffar Salman

ERBIL — The Kurdish People’s Protection Units (YPG) and the Free Syrian Army (FSA) have found a common enemy in the Islamic State of Iraq and al-Sham (ISIS) in the countryside of Aleppo. This new alignment represents a reversal of the situation in summer 2013, when the same rebel group fought with ISIS against the Kurds, accusing the main Kurdish party, the Democratic Union Party (PYD), of abetting the Syrian regime. Today, however, accusations of collaborating with the regime are being directed at ISIS, and PYD leader Salih Muslim is accusing the regime of supporting jihadist attacks against the Kurds.

The YPG’s strategy is to work through Jabhat al-Akrad, the Kurdish faction with links to the FSA, to end the ISIS siege on the Kurdish enclaves of Afrin and Kobani, in Aleppo province close to the Turkish border, and to create easier access between the Kurdish areas interspersed among mixed Arab-Turkmen areas. It is difficult, however, to access these areas without support of local Arabs and Turkmens.

The FSA, on the other hand, wants to use Kurdish-controlled areas as a safe haven against the ISIS and take advantage of the fighting strength of the Kurdish fighters trained by the Kurdistan Workers Party (PKK).

“For our part, the cooperation still continues between all of the Free [Syrian] Army and the YPG in fending off ISIS attacks,” the YPG said in a March 19 statement, confirming their cooperation with the FSA for the first time.

On March 18, the YPG, the military wing of the PYD, had announced that its fighters had launched an operation to capture the town of Sarrin, east of the Euphrates River, south of Kobani and east of Manbij. ISIS managed to repel the attack, however, and keep the town under its control. Fighting there between the two groups is ongoing. There is also continued fighting for control of the border town of Tel Abyad, from which the ISIS has been expelling Kurdish civilians. This followed a three-pronged ISIS attack on the Kurdish-controlled town of Ayn-al Arab (Kobani) on March 15.

Mahmud Berxwedan, the YPG commander in Kobani, told Kurdish news websites, “FSA and rebel groups look for refuge with us, as alone they are defenseless against ISIS. Only the YPG can defend them and stand up against ISIS.”

In a phone interview, the PYD's Muslim told Al-Monitor that it is possible that relations will improve between the FSA and the Kurds. “There are some differences between them [the armed groups], but in the Kurdish case they are all united.” He noted, “Some small groups [of FSA fighters] in Kobani are trying to help the Kurds. We are helping them. We are cooperating against ISIS and other groups.”

The first basis for YPG-FSA cooperation emerged when wounded FSA fighters were treated in the Afrin hospital. Muslim told Al-Monitor,  “When ISIS came, they [FSA] escaped to our areas, and we protected them. Those people fought against us, but we are protecting them. Even some injured are treated in our hospitals, despite our having a shortage of medicine.”

On Feb. 28, ISIS withdrew from the strategic border town of Azaz, which was then taken by Jabhat al-Akrad, the Northern Storm Brigade and Liwa al-Tawhid.

Initially, the FSA had participated in blockades against Kobani and Afrin, but things have changed. Although Jabhat al-Akrad was originally part of FSA’s military council in Aleppo, it was expelled last summer over allegations of working with the PKK and the Syrian regime.

“Actually, Jabhat al-Akrad is part of the PYD militia, nothing more than that,” said Abdulbaqi Yousef, a member of the Kurdish Unity Party, a PYD rival. “We consider those areas [Kobani and Afrin] as Kurdistani areas and Arabs. Kurds and other minorities should be given their rights there,” said Yousef.

YPG spokesperson Redur Xelil told Al-Monitor that the YPG considers Jabhat al-Akrad as “true revolutionary forces inside the Free Syrian Army. In Aleppo, they fought against the regime. We have good relations with Jabhat al-Akrad. They support us, and we support them. We are different entities, and we are different forces.”

When the Jabhat al-Akrad fighter Mohammed Ziad was buried in Afrin on March 3, YPG fighters were present at the funeral. Nonetheless, FSA rebels say that Jabhat al-Akrad is not part of the YPG or PKK to avoid controversy, as they still believe the YPG works with the Syrian regime, despite clashes in Qamishli between the regime and the YPG on March 11.

Rebel cooperation with the Kurds has prompted accusations by ISIS against the al-Qaeda affiliate Jabhat al-Nusra that it is working with the PKK and other non-Islamist groups. The ISIS has tried to use this as justification for suicide attacks against other jihadi groups and to damage their image among jihad proponents, suggesting that Nusra has no qualms about working with secular groups.

A video from Raqqa released by ISIS shows a fighter from the FSA faction Liwa Thuwar al-Raqqa, previously affiliated with Jabhat al-Nusra, confessing to working with the PKK.

ISIS member Abu Dujana AlMuhajir asked on Twitter, “Was it Manbij or Jarabulus in mid Jan when Dawlah [ISIS] was defending against Jabhat Islamiyya [the Islamic Front], FSA, PKK and the gov all at once?”

Meanwhile, Sheruan Hassan, a PYD member in Europe, denies that the Kurds are working with Jabhat al-Nusra. “We can never work together as a result of their ideology. Nusra was the first group to attack us in Serikaniye [Ras al-Ain].”

The YPG called for a dialogue among all sides after ISIS suicide bombers hit Qamishli on March 11, which coincided with clashes with the regime in Qamishli and attacks by the ISIS against Kobani and Afrin on the same day. It implored, “[We] call on the sides concerned, and in particular the Baathist regime, the armed men from ISIS, and all those who think of attacking these areas, to refrain from testing our response and to read what we truly indicated. Once again we stress the necessity for peaceful coexistence and brotherhood among all Syrian groups, and we will work by every means we can to ingrain this culture in every place we can.”