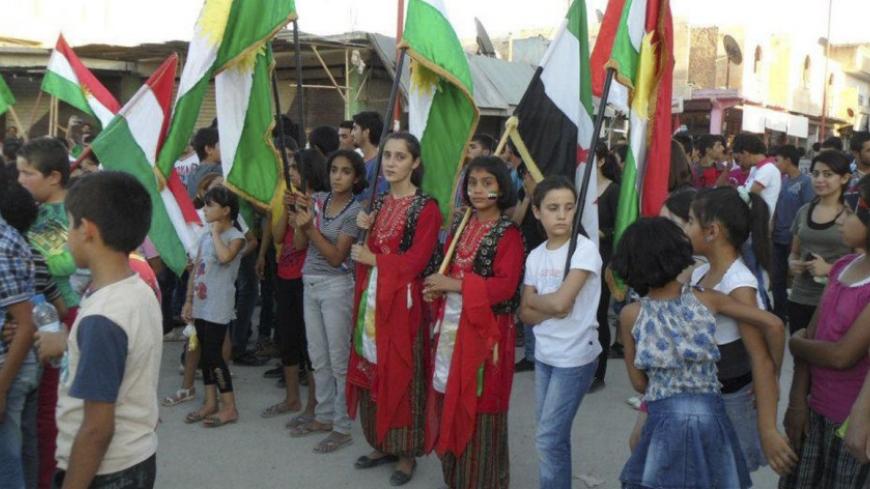 QAMISHLI, Syria — Redur Xelil, spokesman for the Kurdish People's Protection Units (YPG), spoke to Al-Monitor about the intensified clashes between the al-Qaeda splinter group, the Islamic State of Iraq and al-Sham (ISIS) and the Kurds in northern Syria. For the first time, the YPG openly called on Kurds from outside of Syria to join the movement.

ISIS, formerly an al-Qaeda affiliate, has been assaulting the Kurdish inhabited city of Kobani in the province of Aleppo from three sides since March 15. This area is one of the three regions where the Kurds announced autonomous canton administrations close to the border with Turkey.

Kobani holds a symbolic role as the first town that was captured by Kurdish forces on July 19, 2012, as part of a campaign to control Kurdish areas. The creation of the YPG was also first announced in the city in 2012. “Kobani was the first city that was liberated from the regime in Rojava [the western part of Kurdistan in Syria],” said Xelil.

According to Xelil, there are two main rationales behind the attacks on Kobani. First, he said ISIS' agenda is to expand to other regions. Second, he said the regime is having a hard time with the Kurds, and may be engaged in a campaign to weaken them "and remove the new democratic experiment of the Kurds.”

It is not just the YPG and Kurdish parties affiliated with the Kurdistan Workers Party (PKK) such as the Democratic Union Party (PYD) that think the regime is behind the attacks. The rival Kurdish coalition, the Kurdish National Council (KNC) backed by Massoud Barzani, president of the Kurdistan Regional Government in Iraq, concurs that the regime might be playing a role.

Ismail Heme, a member of a KNC party, told Al-Monitor, “Perhaps the regime is playing this game to weaken both ISIS and the PYD.”

On March 12, Syrian government forces killed a YPG fighter in Qamishli after ISIS suicide attacks took the lives of several civilians in the same city. “The regime is trying to weaken the Kurds. They also know we are in a fight with the ISIS. Our fight with ISIS is serving the regime no doubt,” Xelil said.

Kurdish politicians such as PYD leader Salih Muslim also blame Iran and Turkey for the ISIS attacks. “I think there is an Iranian hand in this. This is how we can explain this attack of the ISIS in Kobani,” Xelil added.

On March 24, the YPG called on all Kurdish parties in Iran, Iraq, Turkey and Syria to unite against the jihadist threats against the Kurdish regions in Syria.

“The aim of the attack is the Kurdish existence in general. We don’t think the attacks will be limited to Kobani. They threaten all Kurdish people. The statement was for the Kurds to unite against the ISIS,” Xelil said.

So far, the YPG has received no practical support from other Kurdish parties in the region on the ground. Only the PKK, which helped create the YPG, said it would back the group; there are rumors that PKK guerrilla fighters from the rugged mountainous regions in Kandil in Iraq have headed to Kobani.

“Especially youth from Riha (in the Turkish province of Urfa) should join the YPG. Youth from Bakur (Kurdish populated areas in Turkey) should turn to Kobani and join the resistance,” said PKK military commander Murat Karayilan in a rare statement.

On March 19, YPG fighter Ibrahim Kivik, a Kurd from the province Urfa in Turkey, died fighting in clashes with ISIS in Kobani.

Urfa has a strategic and symbolic importance for the Kurdish movement since it borders the Kobani administration and is also the birthplace of PKK leader Abdullah Ocalan. The pro-Kurdish Peace and Democracy Party (BDP) wants to win the province in the March 30 local elections.

The YPG argues that it’s legitimate that Kurds from other countries join their fight for more Kurdish autonomy. “Especially since ISIS has fighters from all over the world fighting against Kurds. It’s also our right to ask people all over Kurdistan to join us,” said Xelil.

In the past, there were individual cases of Kurdish fighters from other countries joining the YPG. But the YPG did not generally recruit non-Syrian Kurds. “But now we are all open for all Kurds to join, because this is a war that threatens the existence of the Kurdish people,” he said.

Abdulhakim Bashar, the leader of the rival Kurdish Democratic Party of Syria (KDP-S) and part of the Barzani-backed KNC, said they will not fight under the YPG flag in Syria, only under the flag of Kurdistan.

The KNC parties argue that the Syrian Kurds should form a united army based on a November 2012 agreement between the Barzani-backed KNC and PKK-backed PYD in Erbil.

Aid to the Kurds in Kobani is also complicated because the Kobani enclave is surrounded by ISIS on three sides and because Turkey still blocks the border in Kobani despite a visit from the Kobani administration to Turkey seeking the border's opening.

Furthermore, the Kurdish areas in Syria do not form a homogenous bloc and are interspersed by mixed areas — where Kurds, Arabs and Turkmens live — that are mostly controlled by ISIS.

“We want to clean all roads [of ISIS] to Afrin and Kobani,” Mizgin said.

All Syrian Kurdish parties see most of the Syrian-Turkish border cities as part of the Kurdish historical homeland. They argue that areas such as Azaz, Manbij, Al Bab, Jarabulus and Tel Abyad were Arabized by the Syrian state.

“There is a historical truth that they are Kurdish areas, especially those that are close to the Turkish border from Afrin to Derik. But as a result of the Baath regime, these lands were taken from the Kurds and the population of Arabs increased,” Xelil said.

If the YPG tries to take these areas, there might be accusations that the YPG is occupying areas inhabited by Arabs and Turkmens.

This happened before when the YPG captured the Arab-inhabited town of Tell Brak on Feb. 22 and was accused of committing human rights violations against Arabs. The town was used by ISIS to carry out attacks against the Kurds. The YPG withdrew from the ancient settlement of Tell Brak, handed over security to local Arab tribes and halted its military operations in Afrin, Kobani, Hassakeh, Aleppo and Raqqa.

“Because of these sensitivities, we need a political solution, but, for example, Kobani is under siege. So if need be, we might use force, although it might cause problems with the inhabitants,” Xelil added.

Sounding a warning to ISIS, Xelil said that if “these attacks continue against the Kurds, we will not withdraw from this struggle.”