Syrian Kurds not united behind opposition delegation to Geneva talks 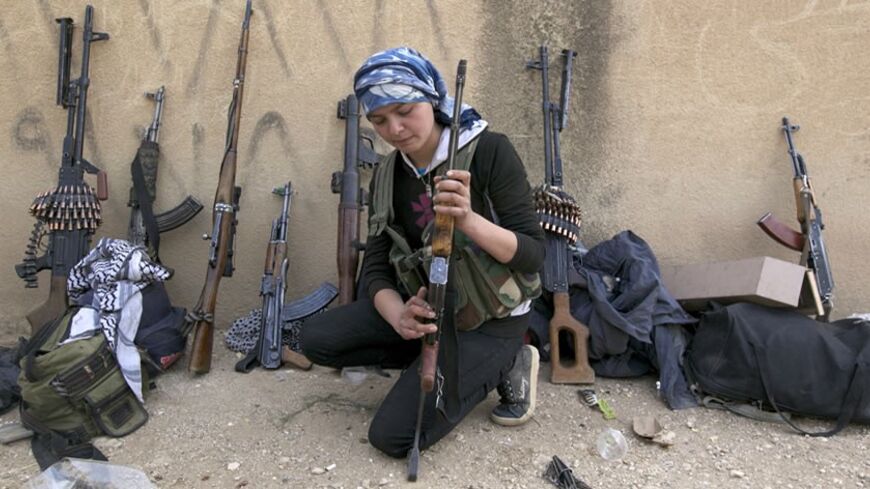 A Kurdish female fighter from the Kurdish People's Protection Units (YPG) checks her weapon near Ras al-Ain, in the province of Hassakeh, after capturing it from Islamist rebels, Nov. 6, 2013. - REUTERS

The Kurdish parties failed to have a united voice in the Geneva II conference, and the Kurdish National Council (KNC) will now be the only party that claims to represent the Kurds in Geneva II, leading to more tension on the ground in Syria.

Abdulhamid Darwish, veteran Kurdish leader of the Kurdish Democratic Progressive Party, will represent the KNC as part of the Syrian National Coalition negotiation team that will deal with the Syrian government.

"They [KNC] are part of the Syrian National Coalition, so they are automatically represented," said Zara Saleh, a member of the Kurdish Unity Party in the United Kingdom.

Barzani is involved in oil deals with Turkey, the PKK's archenemy.

The PYD and the KNC reached an agreement in December 2013 to go to Geneva II with a united Kurdish voice following an agreement between the PKK and Barzani.

But now it seems this agreement is falling apart, and the PKK is accusing the KNC of treason.

The PYD sees the hidden hand of Turkey and Barzani, who both opposed the PYD-dominated Kurdish administration in northern Syria and accused the PYD of supporting the Syrian regime.

Recently, the Syrian National Coalition rejected the PYD's autonomous government in a statement, suggesting that it "threatens the territorial integrity of Syria" and "serves the Syrian regime."

Turkish Foreign Minister Ahmet Davutoglu stated that Turkey supported the PYD in being part of the Syrian National Coalition, but that they "preferred to side with the regime" instead of joining the coalition.

But the PYD says it cannot join the coalition since it does not accept Kurdish rights.

Fuad Aliko, one of the leaders of the Kurdish Unity Party who is currently in Turkey, and Barzani met on Jan. 23 with Davutoglu at the World Economic Forum in Davos, Switzerland.

"Certain Kurdish groups were called, but it did not provide for the participation of a Kurdish identity. The Kurds who are participating there now do not have the authority to represent our people,” said Salih Muslim, co-chair of the PYD, in a press conference at Geneva II.

Cemil Bayik, a leading PKK member, in an interview accused the KNC parties of treason and violating the agreement. "The Kurds would go together [as an independent Kurdish delegation to Geneva II, not as part of a delegation representing the government or opposition], or [they] would boycott it."

He suggested that if the KNC would have boycotted the meetings, the position of the Kurds would be stronger.

But Saleh said this does not violate the agreement.

“Don’t forget, the last agreement in Hewler between the KNC and the PYD said that anybody who will join the Geneva II conference will be the representative of the Kurds, but now the PYD denies it,” he told Al-Monitor.

Darwish, the KNC representative in the opposing negotiation team, has been involved in Kurdish politics since the mid-1950s and is seen as close to Iraqi President Jalal Talabani and Talabani’s Patriotic Union Party (PUK), which enjoys close ties with the Iranian and Syrian governments.

The Barzani-backed Kurdish parties within the KNC — especially the Democratic Political Union — did not accept the PYD's dominance over the Kurdish areas in Syria and the PYD’s People’s Protection Units (YPG) as a national Kurdish army. This while the party of Darwish joined the YPG and supported them in Serekani (Ras al-Ain). Darwish had also been critical of Barzani's policies in the past.

But in the summer of 2013, Darwish decided to back the KNC decision to join the Western-backed Syrian opposition group, and subsequently his party left the PYD’s militias and stopped supporting the PYD’s Kurdish administration.

Darwish told Orient TV he is not against a Kurdish administration.

Darwish, just as Barzani, accused the PYD of not accepting KNC partnership in this government.

But the PYD says the KNC initially accepted the project in an agreement on Sept. 8, 2013, but later rejected it as a result of pressure from Turkey and Barzani.

The PYD announced on Jan. 21 the official declaration of an autonomous government in the province of Hassakeh, a day before the 68th anniversary of Iran’s short-lived Kurdish Republic of Mahabad that was created on Jan. 22, 1946. The PYD is planning to expand their local Kurdish administrations in the Kurdish enclaves of Kobani on Jan. 27 and in Afrin on Jan. 29.

The declaration included several KNC and PYD politicians, Arabs, Syriac Christians, Armenians and Chechens. Most likely, those KNC politicians or parties that support the PYD project will be expelled from the KNC or their membership frozen — the PYD thinks it no longer needs KNC cooperation.

These disagreements over Geneva II and the Kurdish autonomous government created by the PYD also led to tension on the ground.

YPG commander Sipan Hemo accused on Jan. 20 "Kurdish collaborating forces" of being involved in clashes in the towns of Tel Hamis and Tel Brak. The YPG started their campaign on Dec. 23, but withdrew on Jan. 7 after suffering heavy losses with 39 YPG fighters being killed.

After the attack, members of the Kurdish Democratic Party of Syria (KDP-S) were briefly arrested and later released. Moreover, the KNC's office in Al-Mabada (Girke Lege) was burned down on Jan. 24.

The statement followed a shooting at the KDP-S office and a bomb attack carried out by an al-Qaeda-affiliated group against the PYD in Al-Malikiyah (Derik) on Jan. 22, killing 3 and wounding 20 others.

On Jan. 25, Ocalan reached out to Barzani in a letter that deals with the situation of the Syrian Kurds, the peace process in Turkey and the attempts of Kurdish parties to hold a national Kurdish congress. The letter may result in new talks between the KDP and PKK to solve problems in Syria.