The move by the Democratic Union Party (PYD) is opposed by Turkey and the Syrian National Coalition. 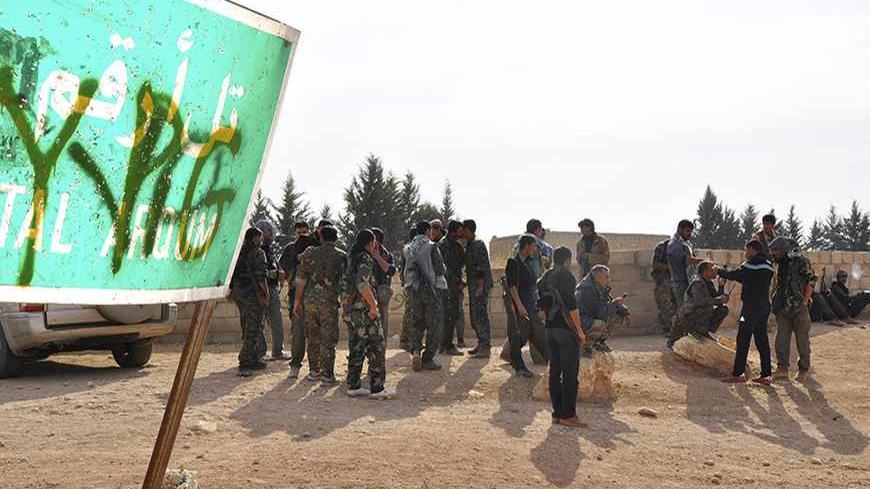 Members of the Kurdish People's Protection Units (YPG) carry their weapons as they gather in Tal Arqum, near Ras al-Ain, after capturing it from Islamist rebels, Nov. 5, 2013. - REUTERS

The Democratic Union Party (PYD), affiliated with the Kurdistan Workers Party (PKK), on Monday, Nov. 11, announced from the unofficial Syrian Kurdish capital of Qamishli that it would form an interim transitional administration, despite objections from Turkey.

The plan is based on a PYD project announced in July 2013, that would include the formation of a interim government, elections and a constitution.
The Kurdish parties from Syria were holding meetings with Kurds, Arabs, Christians, and Chechens, to discuss the project.

The announcement comes after the People’s Defense Units (YPG) made several military gains in the province of Hasakah and captured the Iraqi border crossing in Yaroubiya on Oct. 24.

Alan Semo, a representative of the Democratic Union Party (PYD) based in London, told Al-Monitor by email that the YPG capture has the aim “to establish the self-rule of the region's people and serve the region's multi- ethnic communities.”

The announcement of the PYD came on the same day as the Syrian opposition group, the Syrian National Coalition, announced their provisional government for rebel-held areas, which doesn’t include members of the Kurdish nationalist parties.

A member of the Syrian National Coalition, Bassam Yousef, in a statement to Al Arabiya, denounced the PYD announcement, suggesting it could risk the partitioning of Syria, and was inappropriate before the fall of the regime.

Nevertheless, Fuad Aliko, a member of the Kurdish Unity party, told Al-Monitor from Qamishli that Ahmed Jarba, the head of the Syrian National Coalition, is willing to negotiate about the project, and send a message to the Kurdish parties from Syria.

Hekem Xelo, member of the Rojava General Assembly, told the Kurdish news agency Hawar on Tuesday, "Based on the project, Rojava regions [Kurdish areas of Syria] were divided into three cantons — al-Jazeera [Hasakah province], Efrin and Kobani [Ayn al-Arab]. Each will have its own council represented in the general council."

Xelo added that a 55-member committee was formed to follow up on the implementation of the project. He also indicated that the interim council will be tasked with monitoring the process of drafting local electoral laws, preparing for general elections and promulgating laws, in addition to following up on political, military, security and economic affairs.

The main Kurdish blocs, the Kurdish National Council, formed with the support of Masoud Barzani, the president of the Kurdistan region of Iraq in October 2011, and the People’s Council of West Kurdistan, close to the PYD and the PKK, reached an agreement in September 2013 to form the interim administration.

However, despite the formation of a committee in Qamishli consisting of five members of the KNC, and five members from PYD-affiliated organizations, many disagreements remained. Many members of the KNC point out that the Syrian government is still present in the cities of Hasakah and Qamishli, and pays the salaries of many employees in institutions, and that therefore forming an administration is difficult.

“The success of this project depends on the withdrawal of the regime,” said Sabri Mirza, a member of the Kurdish Unity party in Qamishli.

The KDP-S fears they cannot make any electoral gains in a system controlled by PYD militias, although the PYD says international observers would be observing any elections in the future.

This despite that in neighboring Kurdistan region of Iraq, elections are also held under the control of Kurdish security forces, either loyal to Barzani, the main supporter of the KDP-S, or Jalal Talabani, the president of Iraq, and leader of the Patriotic Union of Kurdistan.

KDP-S member Mohammed Ismail, based in Qamishli, told Al-Monitor he is worried: “We have discussed this with other components of this region, Assyrians, Arabs most of them, who support the regime accept this project, but those who are with the Syrian revolution don’t support this.”

Therefore, he, and the KDP-S leader Abdulhakim Bashar say this project is impossible with the presence of the regime. “They just want to be those who administrate the region. About this project, we think it doesn’t match the reality we live in. The regime still exists,” Mohammed Ismail told Al-Monitor in Qamishli.

In Erbil, KDP-S leader Abdulhakim Bashar told Al-Monitor, “You can have a temporary administration for the daily life [in non-controlled regime areas]. But even in this case, you cannot manage it alone [without paying salaries].”

It seems that. therefore, the PYD moved forward without the KNC, especially since the Syrian National Coalition on Monday accepted the KNC's joining the Syrian opposition bloc. Still, no KNC member was part of the new provisional government formed by the coalition.

Zara Salah, a member of the Kurdish Unity party, based in the United Kingdom, told Al-Monitor, “Only the PYD has announced this, and no party from the KNC.”

Earlier, PYD leader Salih Muslim told Al-Monitor from Qamishli that the PYD would form a kind of local administration as part of the self-ruling project they had in 2007 in cooperation with other ethnic communities. “You know it will be temporary, until a final solution is reached for Syria,” he said.

On Tuesday, KDP-S member Mohammed Ismail told the Kurdish news organization Rudaw that the People’s Council of West Kurdistan “haven’t accepted the demands of the KNC,” and that they wanted to form a transitional administration without the KNC.

Ismail hopes that on Thursday, in a meeting of the Supreme Kurdish Council they will solve the problems between the KNC and the PYD.

Despite their many differences, the KNC and the PYD managed to meet on Monday as part of the Supreme Kurdish Council, which was formed as part of a PYD-KNC agreement with the support of the Iraqi Kurds in July 2012, but that didn’t meet for several months as a result of the tensions between the Barzani and the PKK.

On Thursday, the Kurdish parties will discuss their problems, with the PYD accusing some KNC members of supporting attacks against the YPG, while some KNC-members accuse the PYD of trying to rule over them by force.

Although Syrian Kurdish parties disagree on many issues, all of them agree on some form of self-governance. So it will remain possible that they will reach an agreement.

But in the end, the PYD will decide whether they will do their project with or without the KNC, since they control all the Kurdish areas on the ground.

The YPG is the only militia that is capable of holding ground and fights off al-Qaeda-affiliated groups, which led to more support for the PYD among not only Syria’s Kurds, but also local Arabs and Christians.