The Kurdistan National Council (KNC) and the Democratic Union Party (PYD) are in dispute over power-sharing arrangements. 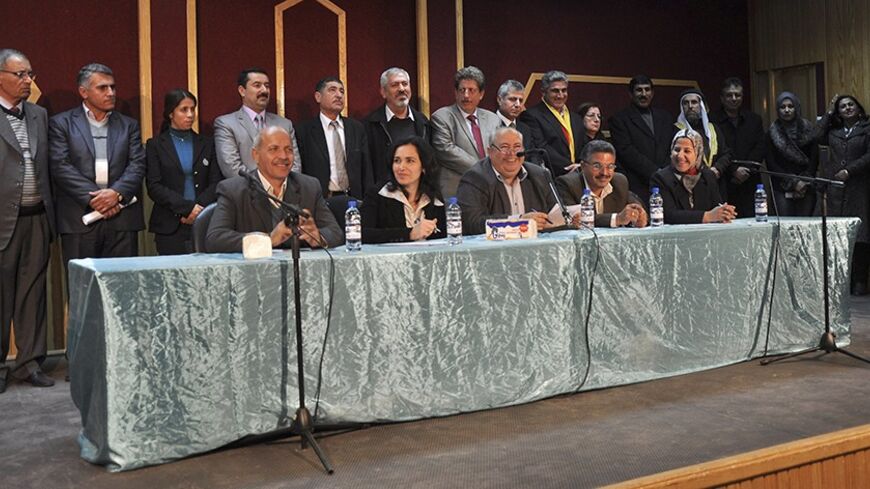 On Feb. 2, one of the main Syrian Kurdish groups, the Kurdish National Council (KNC), decided to expel its members who support the Democratic Union Party's (PYD) plan to form local administrations with 22 ministries, each in three different Kurdish enclaves in Syria. This has led to tensions between the two Kurdish blocs over power.

The PYD has managed to convince some KNC members to join the administrations formed by the PYD, angering the leadership of the KNC that backs the Kurdistan Regional Government (KRG) of President Massoud Barzani. The Barzani-backed parties fear it could give more legitimacy to the administration, which they have called unilateral and authoritarian and allied to the Syrian government.

Officials of the new administrations have indicated they are open to new relations with Barzani’s government, Turkey, Iran and the Iraqi government.

The KNC and PYD supported by the rebels of the Kurdistan Workers Party (PKK) have tried to work together since the Erbil Agreement in 2012 to administer the Kurdish areas through the Supreme Kurdish Council. But the KNC no longer recognizes the body and expelled KNC members who support the PYD.

The formation of administrations in the three Kurdish enclaves on the ground in Syria have replaced the necessity of having the Supreme Kurdish Council act on behalf of just the KNC and PYD, since the administrations include not only Kurds but also Arabs, Christians and other minorities, and will hold its own elections in four months.

Barzani reportedly gave the last chance to the Syrian Kurdish parties to reach a united voice at the Geneva II conference in December 2013. But the United States was against the PYD joining the conference and the KNC joined Geneva II as part of the Syrian opposition without the support of the PYD. In response, the PYD announced three administrations on the ground in Syria.

Washington-based Kurdish reporter and analyst Mutlu Civiroglu told Al-Monitor that it seems the PYD and KNC stopped talking to each other, although some KNC members joined its self-administration.

“According to what I see, relations between the PCWK [the PYD’s People’s Council of West Kurdistan] and SKNC [KNC] are going through one of the worst times. The SKNC claims they are supposed to be the joint representative of both councils in Geneva, whereas the PCWK claims they were deceived by the SKNC because they should not have attended Geneva [conference] once they saw the Kurdish issue was not on the agenda,” Civiroglu said.

Abdulhakim Bashar, leader of the Barzani-backed Kurdish Democratic Party of Syria (KDP-S) and the most powerful Kurdish politician in the KNC, called the declaration of the administrations a call for war in an interview with Al Jazeera, since it is not accepted by the international community.

Kurdish journalist Mohiddin Hussein, affiliated with the media group Rudaw based in Iraqi Kurdistan, told Al-Monitor that the KNC demands the PYD “to admit they are working with the Bashar al-Assad government and the PYD will never do that.”

The PYD has denied any links with the Syrian government as propaganda. Moreover, pro-PYD websites have accused the KNC and Barzani of supporting attacks against Kurdish areas in Syria and working in cooperation with Turkey against the PYD.

Ali Awni, a member of Barzani’s Kurdistan Democratic Party (KDP), in an interview with Rudaw accused the PYD of working similarly to Syria’s ruling Baath Party and claimed the PYD does not allow other Kurdish parties to operate on the ground.

But PYD leader Salih Muslim denied allegations in an interview with Al-Monitor in Brussels that the PYD is dominating the administration and said the situation has changed on the ground. “Now we have democratic administrations that select their own representatives. Now we have a Kurdish side, Arabs, Assyrians, all together,” Muslim said.

“I can’t see anyone from the PYD, Arabs, Christians, Assyrians and some Kurds not belonging to the PYD. Actually, the administration in Qamishli includes five members from the KNC,” he pointed out.

"We hoped the SKNC would be taking part in the democratic autonomous administration, which we believe is for the benefit of our people," the Left Party stated on Feb. 1 before the KNC meeting, announcing their withdrawal from the KNC and accusing the KNC of “joining the Syrian opposition fighting against Kurds.”

Hissou said in an interview that the “administration is not for one party” and suggested the door is still open for the KNC to join the administration.

Alan Semo, the PYD representative in London, told Al-Monitor that the KNC is still welcome to join the administration in the elections that will take place in the three administrations in four months.

“The Kurdish administrations would like to be inconclusive and pluralistic including all parties and organizations in the regions. Therefore, they would welcome any approach to join the administrations and the upcoming election. Most of the KNC parties want to join regardless of the KNC's position,” Semo said.

The PKK that supports the PYD in Syria says the allegations of the PYD acting in an authoritarian manner is propaganda that comes from Turkey and news outlets of Barzani’s KDP.

“Not like the propaganda carried out by the Turks and the KDP that 'there is only the PYD, nothing else is allowed there. There is a dictatorship, there is repression,'” said senior PKK leader Cemil Bayik in an interview, pointing out there is not only the PYD but other Kurdish groups, Arabs, and Syriac Christians in the administrations.

Bayik argued that Turkey's ruling Justice and Development Party (AKP) and the KDP are working hand in hand against the PYD and the PKK as a result of economic agreements. He said the AKP developed ties with the KDP, to “use the KDP to crush the PKK and benefit from its wealth [oil resources].”

While the PKK accuses Barzani of working with Turkey, Barzani-backed parties accuse the PKK and PYD of working with Assad, which might complicate relations between Kurdish parties in Iraq, Turkey and Syria in the future and the organization of a national congress to solve Kurdish political differences.

“Those attending Geneva II, imposing embargoes and being involved in attacks against Rojava cannot organize a national congress that is aimed at ending the problems among Kurds,” Bayik said.

But Remzi Kartal, president of the Kurdistan National Congress (KNK), told Al-Monitor that the Kurds have changed. “They always wanted Kurds to be divided among themselves, but Kurds are not the same Kurds as before, and they are developing and will be united.”

He added, “It will happen [the congress], even if there are some small problems between the political parties. The goodwill of the people will force it to happen, it will maybe not be tomorrow but it will happen. Because it cannot avoid the people’s goodwill to have this conference.”