Despite agreeing to speak with a single Kurdish voice at Geneva II, Syria's Kurds are far from united on how to administer the Kurdish areas in the future. 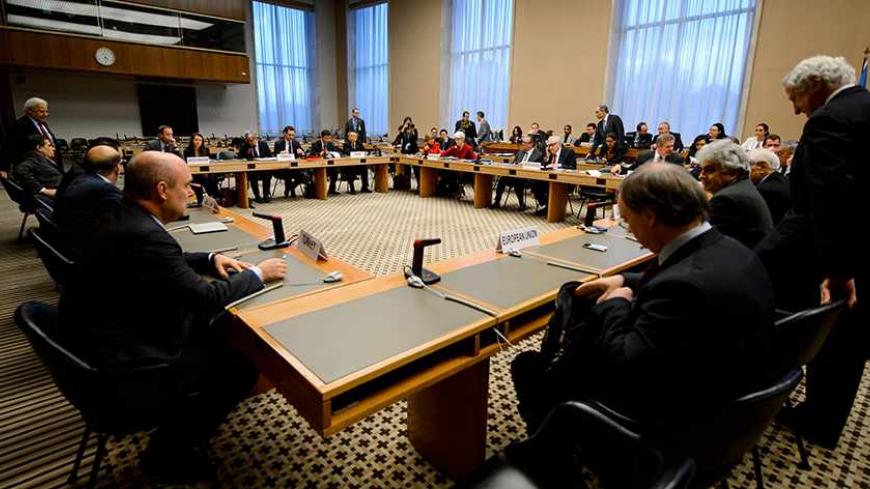 Delegates are pictured prior to a meeting on Syria at the United Nations offices in Geneva, Dec. 20, 2013. - REUTERS/Fabrice Coffrini

WASHINGTON — Leaders of the Syrian Kurdish parties agreed Dec. 24 to participate in the Geneva II peace conference on Jan. 22 with a single Kurdish voice as either part of the Syrian opposition bloc or as an independent Kurdish delegation. But differences remain over how to administer the Kurdish areas in the future, which could again lead to tensions among them.

The Democratic Union Party (PYD), the Syrian branch of Turkey’s Kurdistan Workers Party (PKK) and the Kurdish National Council (KNC), a coalition of 16 Kurdish parties backed by Massoud Barzani, the president of the Kurdistan Regional Government (KRG), concluded the Erbil agreement in 2012 to administer Syria’s Kurdish areas together through the Supreme Kurdish Council (SKC).

The agreement between the two main Kurdish nationalist blocs in Syria never came to fruition. The Syrian Kurdish parties failed to share power, and the PYD remained the strongest Kurdish party on the ground in Syria and gained more popularity by fighting al-Qaeda.

The PYD was also one of the founding members of the National Coordination Body (NCB) that calls for a dialogue with the regime to solve the conflict peacefully.

Most of the KNC leaders moved to Iraqi Kurdistan outside of Syria and decided to join the Western-backed Syrian National Coalition (SNC) last summer. Like the KNC, the SNC doesn’t have a big presence on the ground in Syria. As a result, the KNC parties grew weaker and weaker inside Syria.

On Dec. 8, the  KNC decided in Qamishli to stop recognizing the authority of the SKC and not support the self-management plan of the PYD to form an interim Kurdish administration in Syria.

The KNC said that no decision can be made by the SKC, while the PYD wants the SKC to represent the Kurds in Geneva II. The pro-PYD media criticized the KNC's decision, and the PYD planned to replace the KNC parties with other parties in the SKC.

“The KNC has proved to fail again by participating under the name of the Syrian coalition in Geneva II and has lost their remaining credibility, because no one supports this ineffective stance,” UK-based PYD spokesman Alan Semo told Al-Monitor on Dec. 9.

The PYD saw the decision of the Kurdish parties backed by Barzani as an attempt to derail their Kurdish administration project. But the PKK and Barzani’s Kurdistan Democratic Party (KDP) decided to end these tensions and reached a four-point agreement to unite the Syrian Kurds.

“What is important is that Kurds move together and go to Geneva under a common representative and demand a status. Whether it is a federation or democratic autonomy is not very important,” said Mustafa Karasu, an influential member of the executive council of the PKK, as reported by the Firat News Agency.

This was followed by bilateral meetings between the KNC and PYD on Dec. 17. After negotiations that lasted more than a week, the parties reached a 10-point agreement on Geneva II on Dec. 23.

“The participation in Geneva II is solved. If the Kurds are invited as their own delegation they will represent themselves in a joint [PYD-KNC] independent delegation with agreed demands. If Kurds have to go with the opposition, then whoever attends from the [Syrian National] Coalition or the NCB would represent Kurdish demands,” said Semo.

Zara Saleh, a UK-based member of the Kurdish Unity Party, affiliated with the KNC, told Al-Monitor the KNC and PYD agreed that Syria should be a secular and federal state.

“If the KNC goes with the Syrian [National] Coalition, they will ask for these demands. If the PYD goes with the NCB, they will have the same message. This agreement may be the best decision that has been made.”

It’s most likely that the international community will not allow the Kurds to have their own delegation at Geneva II, and that’s the reason why the PYD and KNC decided to coordinate similar demands for Kurdish autonomy.

Nuri Brimo, a member of the Barzani-backed Kurdish Democratic Party of Syria (KDP-S), pointed out that the international community decided that there will be two Syrian delegations to Geneva II: the delegation of the opposition and that of the regime. He said, “The Kurdish Council made the decision to be a part of the national coalition, and they will attend Geneva [II] with the coalition if there are no multiparty delegations.”

Moreover, the PYD and KNC agreed to open the Kurdish-controlled  Semalka border crossing for political delegations and humanitarian aid, closed from both sides after PYD leader Salih Muslim was refused entry into the KRG from Syria on Oct. 23.

Furthermore, they agreed to release political prisoners arrested by the security police of the PYD, known as asayish. But this point already might face its own hurdles.

In a statement to the media, asayish spokesman Ciwan Ibrahim said it does not have any political prisoners, only those who were arrested on the basis of relationships with terrorists and other illegal acts.

The pro-PYD media has accused some members of the KNC before of participating in attacks against Kurds in Aleppo.

Asharq Al-Awsat reported that the two sides failed to agree on a Kurdish administration and the reactivation of the SKC, and postponed a decision on this issue until Jan. 15.

Leader of the KDP-S Mohammed Ismail said in an interview with Welati that the two sides did not reach a final agreement, blaming the Syrian regime for "not allowing the Kurds to unite.”

Although the Kurds demand unity from the Kurdish parties, Ismail blamed the PYD for “not wanting a true partnership and seeking everything to be in its hand.”

Kurdish activist Nizar Mistefa from the Syrian Kurdish Youth Movement told Al-Monitor that the agreement was a "good step" than can be used to reach a new deal by both sides, even though it did not reach the expectations of the Kurds in Syria.

“Unfortunately, the days are passing and the situation is as it was before, so Hewler II [the Erbil agreement] will be like Hewler I.”

It seems that for now, the Kurdish parties from Syria will continue to agree to disagree on a Kurdish interim administration while having an united Kurdish voice at Geneva II.