Syrian Kurds fear the upcoming Geneva II conference will ignore their voice and not recognize a form of Kurdish autonomy in northern Syria. 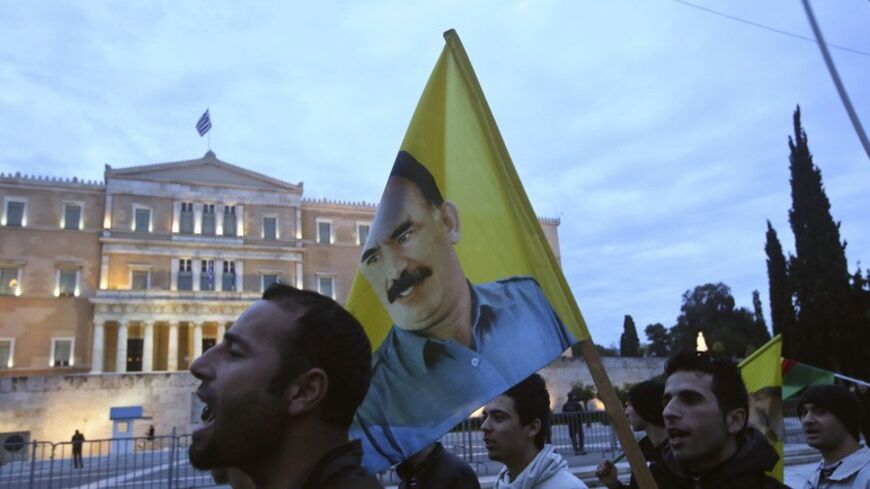 Kurdish protesters shout slogans during a rally in Athens, Jan. 18, 2014. A few hundred members of the Kurdish community in Greece marched to the office of the European Commission to request that the situation of Kurds in Syria be discussed at the upcoming Geneva II conference. - REUTERS/Giorgos Moutafis

AMSTERDAM — During a Jan. 15 press conference in Paris, Salih Muslim, leader of the pro-Kurdish Democratic Union Party (PYD), said he was disappointed that the Russians and Americans did not allow the Kurds to have their own delegation at the Geneva II conference, scheduled to take place on Jan. 22. "If the Kurds did not attend with their own independent delegation, then no one there will represent the Kurdish people, and their legitimate rights in the country will not be ensured," he said.

On Dec. 24, members of the two main Kurdish blocs, the Kurdish National Council (KNC) and the PYD, agreed that the Syrian Kurds would go to Geneva II with a single Kurdish voice, as an independent delegation or as part of the Syrian National Coalition.

On Jan. 18, the Syrian National Coalition decided to go to Geneva II, and members of KNC’s Foreign Relations Committee will represent the KNC at the conference. The former president of the Syrian National Council (SNC), Abdulbasit Sayda, a Kurd, told Al-Monitor it’s not clear yet who from the KNC will go. “We have some names from the KNC, but we will have to see how many will go,” he said.

Washington-based Kurdish journalist Sirwan Kajjo told Al-Monitor that the KNC delegation will be headed by Hamid Darwish, and will most likely include Ibrahim Biro, Abdulhakim Bashar, Kamiran Hajj Abdo and Mustafa Sino, leading members of Kurdish parties in Syria.

“The Kurdish question will be part of the talks, and that's why the Kurdish delegation is taking part in the conference. It will be regarded as a national issue. This legitimizes Kurdish demands and puts them forward on the international platform," he said.

A Syrian National Coalition source indicated that the coalition will decide on the final delegation later.

Nevertheless, the PYD is not happy that only the KNC will go as part of the Syrian National Coalition.

Redur Xelil, the spokesman of the dominant Syrian Kurdish militia group, the People's Protection Units (YPG), accused the coalition of ignoring Kurdish demands. “The so-called Syrian National Coalition has made a decision and is trying hard to exclude the Kurds from the Geneva II conference,” he wrote on Twitter.

Kurdish organizations affiliated with the Kurdistan Workers Party (PKK) and the PYD are now organizing protests and other activities in Syria, Europe and Turkey to demand an independent Kurdish representation at Geneva II.

“[The Kurds] are being hindered form taking part in Geneva II as an independent factor. Such an attitude reduces the hope for this conference to take positive steps toward peace and democratization in Syria,” the PKK said in a Jan. 15 statement received by Al-Monitor.

Both the PYD and the PKK say they will not recognize the legitimacy of the conference if the Kurds are not allowed to have their own delegation.

“The exclusion of the most basic democratization force — that is, the Kurds — from a conference on the future of Syria invalidates Syria’s democratization from the very beginning. Those ostracizing the Kurds will be held responsible for this,” the PKK said.

But it's not only the Syrian opposition that doesn’t want an independent Kurdish delegation at Geneva II.

Many reports suggest that the United States opposed the participation of the PYD's Muslim at the Geneva II conference, and the US State Department expressed concerns over the PYD’s move to create self-administration for the Kurds, emphasizing US support for Syria’s unity and territorial integrity.

US Ambassador to Syria Robert Ford accused the PYD of supporting the regime in an interview with Asharq Alawsat newspaper and suggested Kurds should be a part of the Syrian opposition and not unilaterally impose Kurdish autonomy.

According to Washington-based Kurdish journalist Mutlu Civiroglu, the KNC will go to Geneva II in a delegation led by KNC foreign relations head Hamid Darwish, and KNC members will represent the Kurds in Geneva II.

He wrote in an article for CNN that the United States and its allies should stop ignoring the Kurds and welcome their independent participation in Geneva II since the Syrian opposition would not accept Kurdish demands.

“A conference that ignores Syria's largest ethnic minority, after all, will not produce any viable solutions,” he wrote.

Even the Russians who initially supported the Kurds having their own delegation at Geneva II dropped their support for the Kurds.

Muslim said the Russians told him, “Don’t bring up the Kurdish question now. Leave it for other meetings.” This, despite earlier warm relations between the Russians and the PYD.

Some Kurds warned the PYD of the Russian position. “I have always said that we cannot trust the Russians,” Sherwan Ibrahim, a Kurdish politician close to the PYD, told Al-Monitor.

On Jan. 16-17, the KNC visited the Russians to get support for Kurdish rights.

“During a meeting of the Kurdish delegation with the Russian Foreign Ministry, the Kurds asked the Russians to persuade the opposition to include the Kurdish issue in Geneva, but so far the coalition didn’t accept,” said Ashti Malky, media manager for the KNC-affiliated Kurdish Unity Party in Syria.

Thus, even members of the KNC doubt that the Syrian coalition will support Kurdish demands, although they joined the opposition group as a result of Western pressure.

Welid Sexo, a member of the Kurdish Freedom Party, which is a KNC member, confirmed to Al-Monitor that the KNC will go to Geneva II as part of the Syrian National Coalition, but he doubts the Kurdish issue will be discussed. “[The] opposition is no better than the regime in dealing with the Kurds,” he said.

“We may be obliged to attend Geneva II to end the violence and killing in Syria, but we are not obliged to obey its decisions if it contradicts the interests of the Kurdish people,” he added.

The Syrian Kurds are now afraid that their voice will not be heard at the conference if they do not get an independent delegation.

“If the Kurds attend Geneva within an opposition delegation, they will lose a lot of their legitimate rights because their voices will be integrated within the opposition and their demands will not be heard,” said Nizar Mustafa, a member of the Kurdish Youth Movement (TCK), an activist Kurdish group in Syria.

Kurdish activists and politicians fear the conference will be a repeat of the signing of the Treaty of Sevres in 1920, which promised the Kurds independence, only to be annulled by the Treaty of Lausanne in 1923, leading to the creation of the Turkish republic without any form of Kurdish autonomy or rights.

However, Sabri Ok, a member of the PKK’s executive council, the Kurdistan Communities Union, is much more optimistic than the leader of the PYD.

Even if the Kurds are not represented at Geneva II, he said, this will not be the "end of the world," pointing out that the Syrian Kurds have already achieved their status by controlling their own areas.