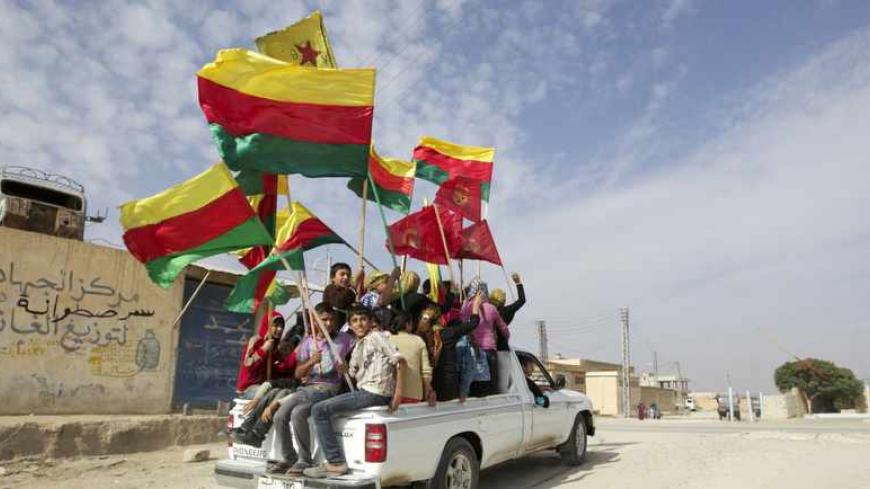 People sit in the back of a truck as they celebrate what they said was the liberation of villages from Islamist rebels near the city of Ras al-Ain in the province of Hassakeh, after capturing it from Islamist rebels, Nov. 6, 2013. - REUTERS/Stringer

BRUSSELS — The Kurdish parties in Syria are discussing how to participate in the Jan. 22 Geneva II conference after heavy tensions erupted between the Kurdistan Democratic Party (KDP) and the Kurdistan Workers Party (PKK) along with its affiliate, the Democratic Union Party (PYD). The Syrian Kurds now have one month to solve their differences or face a disunited voice at Geneva II with the risk of being ignored.

Tensions increased late October, after the KDP, led by Kurdistan Regional Government President Massoud Barzani, decided to refuse PYD leader Salih Muslim entry into Iraqi Kurdistan. Furthermore, on Nov. 11 the PYD announced it would move ahead with their interim administration plan without the support of most members of the Kurdish National Council (KNC), which is backed by Barzani.

The PYD is one of the founding members of the "internal opposition party," the National Coordination Body (NCB), which is closer to Russia’s position of non-intervention. The other Syrian Kurdish bloc, the Barzani-backed KNC, joined the Western-backed Syrian National Coalition (SNC) after giving in to some concessions to the Kurds.

The decision of the KNC to join the Syrian opposition and the PYD’s decision to remain in the NCB created disagreements over how the Kurds would participate in Geneva II.

The KNC and the PYD agreed to cooperate with the Supreme Kurdish Council following the October 2012 Erbil agreement, signed under the guidance of Barzani, but on the ground the two Kurdish blocs failed to work with each other.

Mustafa Cumaa, the head of the Kurdish Freedom Party, told Al-Monitor in Erbil that Barzani held a Dec. 3 meeting in Erbil with KNC leaders to discuss how to deal with the PYD, Geneva II and the PYD plan to form an interim government for the Kurdish areas of Syria.

Cumma said that Barzani instructed the KNC members to hold a new dialogue with the PYD to solve the problems between the Kurdish parties and present a united Kurdish voice at Geneva II. Barzani gave the last chance to the PYD-KNC agreement. Moreover, he sent an invitation to SNC President Ahmad Jarba to visit the Kurdistan Region of Iraq to discuss Geneva II.

Earlier, there were unofficial meetings between Kurdish members of the KNC and PYD inside Syria, such as the one on Oct. 27 in Qamishli.

Muslim called on Brahimi to form an opposition delegation for Geneva II composed of 30 to 40 figures from the SNC, the Supreme Kurdish Council (uniting the KNC and the PYD) and the NCB.

Aldar Xelil, a powerful member within the PYD and a member of the Supreme Kurdish Council, said the KNC will meet on Dec. 5 to decide whether to support the temporary administration project and the Geneva talks. It's still unclear if they made a decision regarding their relations with the PYD. According to unconfirmed media reports, the KNC decided to participate in Geneva II as part of the Syrian coalition and not to work with the PYD.

“We hope that the actions of members of KNC will be to pursue the national interests of the Kurdish people in Geneva and participation in the work of administration. This is a necessity for democracy and will also be the best decision for Rojava,” Xelil said.

According to Xelil, the administration project and the participation of the Kurds as a united bloc in Geneva II would receive wide support from the Syrian Kurds. “We are now in a situation that has provided for this. In general, both on the subject of the administration of Rojava [Kurdish areas of Syria] and participation in Geneva, the framework that we have presented as the Supreme Kurdish Council has received widespread support.”

On Nov. 26, Leyla Zana, a popular Kurdish politician of the pro-Kurdish Peace and Democracy Party (BDP) from Turkey visited the Kandil Mountains in Iraq — the main base of PKK fighters — and Barzani in Erbil, to mediate between the two sides. The KDP confirmed that they discussed the Syrian Kurdish issue.

However, the pro-PYD Hawar News Agency published an article suggesting that even Russia and other countries might not side with the PYD and sideline the PYD in the conference.

“The USA, Great Britain, France, Turkey, Iran and the KDP are on the same page. This coalition does not accept real Kurdish participation at the 'Geneva II' meetings or that the Kurdish issue be on the agenda as a separate heading.”

BDP co-chair Gultan Kisanak told Al-Monitor at a Dec. 4-5 Kurdish conference in Brussels that the BDP supports Kurdish unity. “Our official position is that Kurds should take part in Geneva II separately as part of the Supreme Kurdish Council.” She added, “It is very vital that Kurds are represented there, since neither the regime nor the opposition is ready to meet Kurdish demands. That’s why it's important.”

PKK’s European secretary, Zubeyir Aydar, told Al-Monitor that there is ongoing dialogue between the PKK and the KDP on many levels. “I believe it should be possible that Kurds can unite under the umbrella of the Supreme Kurdish Council, and I think it's most beneficial for the Kurds.”

Hemin Hawrami, head of the KDP’s foreign relations, told Al-Monitor that the KDP doesn’t dictate to the Kurds what to do, but that they prefer a united Kurdish delegation at Geneva II since, if the Kurds are not part of the discussions at Geneva II, Kurds will not be part of the agenda.

The upcoming month will show if the Syrian Kurds will be able to bridge their differences before Geneva II. This is also dependent on relations between Abdullah Ocalan’s PKK and Barzani’s KDP.