The Supreme Kurdish Council of Syria is ready to participate in the Geneva II conference. 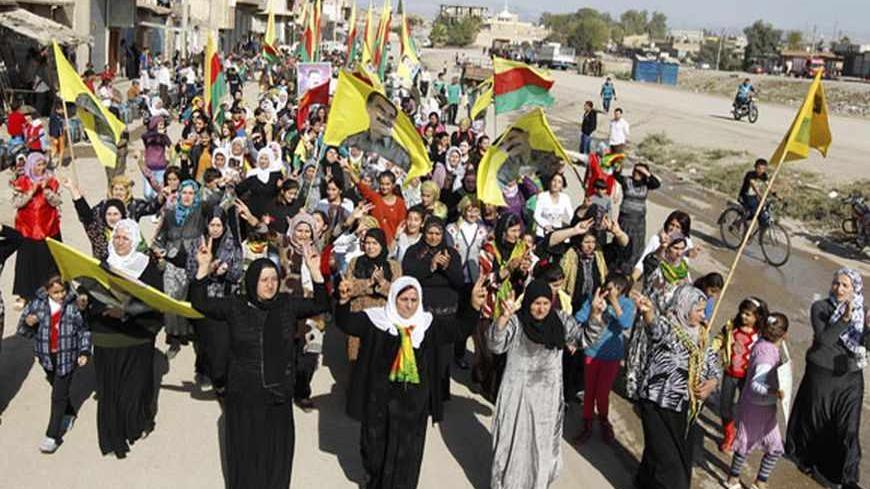 Members of the Supreme Kurdish Council (SKC), a body uniting Kurdish parties from Syria, went for their first official visit to Moscow on June 2 and met Russian Deputy Foreign Minister Mikhail Bogdanov in Moscow, despite internal differences between Syrian Kurds. Moreover, they visited the Duma (Russian parliament) on Friday [June 7].

According to the website of the Democratic Union Party (PYD), "the meeting marked the first official invitation from Russia and aimed at establishing diplomatic relations between the two parties. Among the topics discussed were SKC's position on the Syrian regime and the role of the YPG [People’s Defence Units, a militia of the PYD].”

Salih Muslim said the Russians did not reject the demands of the SKC and stressed that both parties looked forward to strengthening their ties.

PYD member Alan Semo told Al-Monitor that Russia’s Foreign Minister Sergey Lavrov promised the PYD leader, “without you [the Kurds], there will not be any meeting in Geneva,” pledging the SKC would represent the Kurds of Syria in the conference.

The visit follows tensions between the PYD, affiliated to the Kurdistan Workers Party (PKK), and four smaller Kurdish parties united in the Democratic Political Union. The Union is supported by the Kurdistan Democratic Party (KDP) led by Massoud Barzani, who is also the president of the Kurdistan Region of Iraq, and is closer to the policies of Turkey that backs the Syrian opposition against the Syrian government of President Bashar al-Assad.

Seventy-four members of the KDP-backed KDP-S were detained by the YPG near the Syrian border, after trying to sneak into Syria from Iraq. They were released after questioning a few days later. But KDP security forces closed the borders between the Kurdish areas of Iraq and Syria — a situation that remain until today.

Preceding the Russia visits, the Unity Party held talks with the Kurdish Progressive Democratic Party, which is more supportive of PYD policies and is financed by the Patriotic Union of Kurdistan (PUK). This resulted in the release of members of the Sheikh Mashuq Khaznawi brigade, a militia affiliated to the Unity Party, on May 30, and most likely a deal to head to Russia.

Furthermore, the Democratic Political Union decided at the last moment not to join the Syrian National Coalition (SNC), and only a representative of the Freedom Party went to Istanbul, despite an announcement by Khalid Saleh, the SNC's director of media, that the Democratic Political Union would join the Syrian opposition and participate in the six-day conference that took place between May 23-29.

Abdul Baqi Youssef, a member of the Unity Party told Yekiti Media, that they feared a negative reaction from the Kurdish population of joining the opposition bloc without the Kurdish National Council (KNC), a bloc of mostly Syrian Kurdish parties with the exception of the PYD.

While the rivals of the PYD are undecided to join the Western-backed opposition, the PYD supports the National Coordination Body for Democratic Change in Syria (NCB), which supports a dialogue between Assad and the opposition and is against militarization of the conflict.

Despite these internal differences and tensions between KDP-backed parties and the PYD, this did not prevent Saud Melle and Ismail Hama, whose parties are backed by the KDP, to participate in the visit to Russia, following an invitation from the Russian Ministry of Foreign Affairs.

The leader of the PYD, Salih Muslim, headed to the Kurdistan Region of Iraq from Europe before and visited Slemani, a PUK-stronghold of ailing Iraqi President Jalal Talabani that backs PYD policies to curtail influence of the KDP in Syria. But the PYD leader did not manage to visit Barzani to solve the problems between the PYD and KDP in Syria’s Kurdish areas.

Ahmed Suleiman, a spokesman of the Supreme Kurdish Council, told Kurdish newspaper Rudaw, “Russia respects the Kurdish people in Syria and recognizes that the Kurds are following a legitimate struggle. The existence of the Kurdish people is denied and in the new Syrian constitution, the rights of Kurds must be recognized.”

At a press conference in Moscow, Ismail Hama said that the Syrian Kurds would form an independent delegation, reported the Russian news agency Interfax. “As Kurds, we have been suppressed by the regime, and this went as far as ethnic cleansing 50 years ago. Hence, we really expect our national problem to be resolved or proposals for resolving our problem to be made. We have decided to form a separate and independent delegation at the conference,” he reportedly said.

Lavrov emphasized that the Kurds should be included. "We believe all opposition structures in Syria should be given an opportunity to communicate their viewpoint and participate in the achievement of a compromise, which will ensure peace, stability and equal rights for all ethnic and religious groups in the country," he said.

In May, Lavrov and US Secretary of State John Kerry decided to resume talks in Geneva on Syria in order to find a diplomatic solution to the Syrian crisis. But so far, these talks seem unlikely since the Syrian opposition in exile refuses to participate in them without Iran and Hezbollah ending their military support for Assad in Syria, while opposition parties such as the NCB are willing to participate.