Syria’s Kurdish parties consider whether to be represented independently or as part of the Syrian National Coalition. 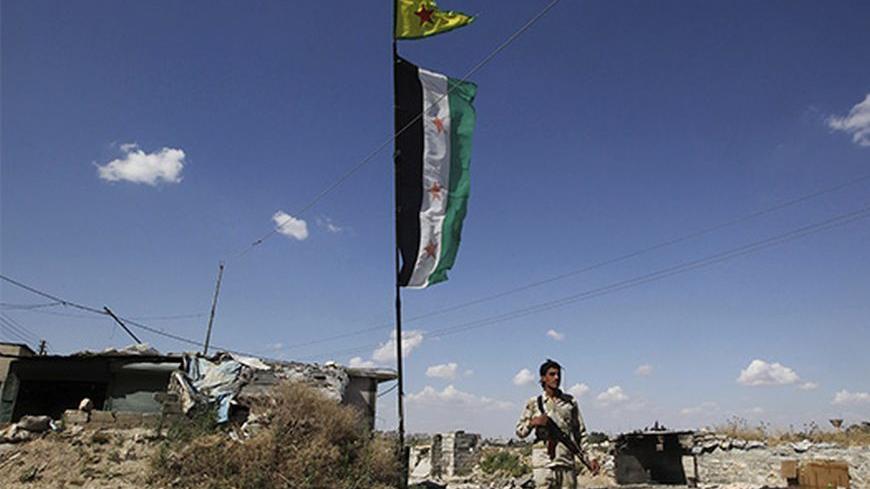 Russia's Foreign Minister Sergey Lavrov said that the Kurds should be part of Geneva II. “We would like the opposition to represent the entire spectrum of the opponents of the regime, including the opposition which is active inside Syria such as the National Coordinating Committee and the Supreme Kurdish Council,” he said.

But there are claims that the United States prefers the Kurdish National Council (KNC) — which unites most Kurdish opposition groups, apart from the PYD — to be part of the Syrian National Coalition (SNC), rather than participate independently.

In mid-September, the KNC joined the main Syrian opposition bloc after pressure on both sides to make an agreement, which led to criticism by the PYD that it could threaten the unity of Syrian Kurds. But PYD rivals said the group is not willing to share power with other Kurdish groups in the Kurdish areas in Syria.

Abdulhakim Bashar, leader of the Kurdish Democratic Party of Syria (KDP-S) — which is backed by the powerful KDP in Iraq — said he is not sure yet if the conference will be successful. He was part of a KNC meeting with Turkish Foreign Minister Ahmet Davutoglu on Oct. 9.

Bashar said if there is room for groups outside the SNC and the Syrian government, they would prefer to be independent as Kurds and not be part of the Supreme Kurdish Council.

Bashar, who leads the second biggest party in the Kurdish areas in Syria, said he is not optimistic about the future of the conference without Syrian President Bashar al-Assad stepping down.

“It will be delayed for a long time,” he said. “I don’t think Assad will leave his throne in Syria during Geneva II, and the opposition will never accept a new government with Bashar. There could be Geneva III and IV.”

Mustafa Juma, leader of the Kurdish Freedom Party — a party also sympathetic to Barzani — agrees that the “first priority for the Kurds is to be represented as an independent force. But if that’s not possible, we will be part of the SNC.”

Hemin Hawrami, head of KDP's foreign relations, said the visit of Syrian Kurdish parties to Turkey is a good sign. He emphasized that the Kurdish voice should be heard during Geneva II. “We also encourage the NC [National Coalition] and Geneva II to be flexible to accept the Kurds. If they want to have a Syrian opposition group, they should accept the rights of the Kurds. Not only through promises, but also through agreements.”

The PYD is critical of Barzani’s policies in Syria and has criticized the decision of the KNC. Jafaar Henan, the PYD representative who runs the party's relations with the media and political parties in the Kurdistan Region of Iraq, said the Supreme Kurdish Council represents all the Kurds and not the Syrian opposition.

“We won’t join the SNC, because it doesn’t recognize the Kurdish rights. So if the other parties prefer to do so, they only represent themselves, not the Kurdish people,” Henan said.

According to Henan, an agreement might not be difficult and the United States will not prevent an independent Kurdish representation. “In general, the Russians and Americans want to solve the Syrian issue. The Americans do not recognize it yet, but they will. They will recognize the reality that we are the only force on the land.”

PYD leader Saleh Muslim told the website Rudaw.net that the KNC deal with the Syrian opposition divides the Kurds. “I think it’s going to divide the Kurdish people, because there was a decision by the Supreme Kurdish Council not to deal with any side of the opposition without permission,” he said.

Salih Gado, leader of KNC-member Kurdish Left Party in Syria, said his party “believes the Syrian crisis should be solved in a peaceful way, and the Geneva conference was something it wanted.”

The Kurdish left-wing politician said that the unification of Kurds is very important. “Between us [KNC] and the PYD, there are not many differences in our vision. So we prefer to participate in the Geneva conference as the Supreme Kurdish Council.”

Unlike the PYD, he sees no problem that the KNC joined the Arab opposition. “Until now, the PYD is a member of the National Coordination Body for Democratic Change. Therefore, we think that the KNC has the right to join the Syrian opposition.”

But he emphasized that his party thinks the Supreme Kurdish Council should represent the Kurds in the Syrian opposition bloc. “We don’t support Kurds being divided in many forces at this stage.”

Ibrahim Birro, secretary of the Kurdish Unity Party, is one of them. “I believe the solution should come from Syrian Kurds, not from outside [Kurdish parties in Iraq and Turkey]. In reality, the PYD is a very powerful factor [on the ground]. But bad behavior by the PYD encourages people to be closer to Barzani.”

Birro suggests the Syrian Kurds be represented independently from the opposition bloc, as the PYD and the KNC, or “united in the Supreme Kurdish Council.”

For now, it seems that the Kurdish parties in Syria will be unable to resolve their differences before Geneva II takes place. While the KNC joined the Western-backed Syrian opposition bloc, the PYD’s preference for a Supreme Kurdish Council is supported by Russia.