The Syrian Kurdish Democratic Union Party (PYD) is calling on Ankara and Erbil to open border crossings to allow trade and safe passage. 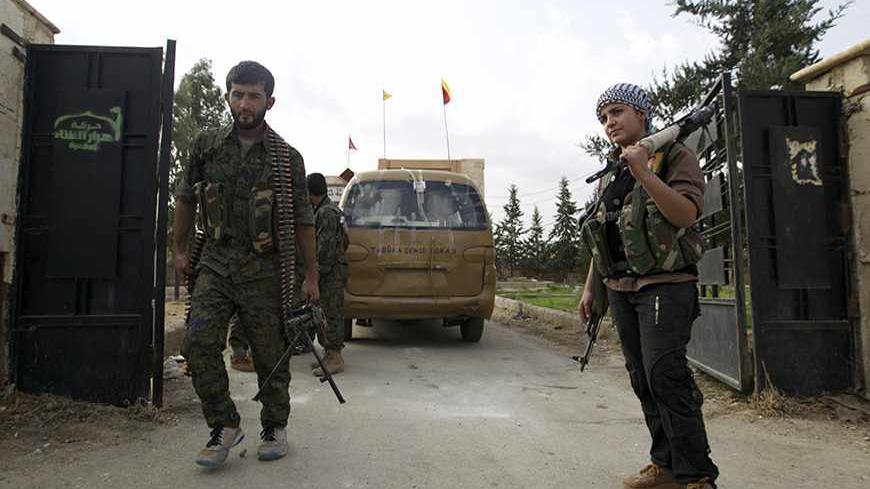 Members of Kurdish People's Protection Units (YPG) walk after capturing a military base that belonged to the Islamist rebels near Ras al-Ain, in the province of Hasakah, Nov. 6, 2013. - REUTERS

The Kurdish Democratic Union Party (PYD), affiliated with the Kurdistan Workers Party (PKK), has accused Turkey and the Kurdistan Democratic Party (KDP) of blocking aid, trade and closing of PYD-controlled border crossings. Moreover, Turkey is building a 2-meter (6.5-feet) high wall to prevent smuggling and the bypassing of checkpoints by Syrian Kurds.

Turkey is opposed to the PYD controlling Kurdish areas and worried about their links to PKK rebels, while KDP leader and Kurdistan Regional Government (KRG) President Massoud Barzani has been critical of the PYD and accused it of working with the Syrian government.

The PYD hopes that a recently captured Iraqi border crossing in Yaroubiya can provide an alternative to Turkey and Barzani's policies.

PYD leader Salih Muslim told a Kurdish TV station, "Developments in Til Kocer [Yaroubiya] would also lead to changes in the political and economic situation in West Kurdistan [Kurdish areas of Syria], and said this success has created an alternative against the efforts and intentions to hold the entire West Kurdistan territory under embargo,” reported Firat News Agency on Oct. 27.

The People’s Protection Units (YPG), affiliated to the PYD, took control of the Syrian-Iraqi Yaroubiya border crossing on Oct. 24 with the help of a local Arab tribe in response to a suicide attack by al-Qaeda-affiliated groups on Oct. 19 in the town of Qahtaniyah. Reportedly, the local Arab tribes want to share the control of the Iraqi border crossing with the PYD in exchange for their support against al-Qaeda groups in the area.

“We especially thank the tribe of Shamar for their contributions in the success of this mission,” the YPG said in a statement following the operation.

The Syrian National Coalition accused the PYD of cooperating with the Iraqi army and Iraqi Prime Minister Nouri al-Maliki against the Free Syrian Army, although only al-Qaeda-affiliated groups were stationed near the Iraqi border.

However, the YPG denied any relations with the Iraqi government. “We in the YPG do not have any official relations with the Iraqi party [government], and these matters are related to the Supreme Kurdish Committee,” said Redur Xelil, YPG spokesman, referring to the Supreme Kurdish Council, which was formed in July 2012 as part of an agreement between the PYD and the Barzani-backed Kurdish National Council to jointly administer the Kurdish areas of Syria.

The PYD does not have any official relations with the Iraqi government, although Muslim met with Maliki on Dec. 20, 2012, as part of a delegation of the National Coordination Body.

Barzani Iso, a Kurdish veteran journalist, told Al-Monitor by Skype that Iraq could support it. “The KDP and Turkey have the same policy for Rojava, but now we have another side [Iraq] on the border with Rojava that has problems with Turkey and the KDP. So for regional power balances it’s very important. The Iraqi side [government] two days ago said it's important for the border crossing to open for trade and economic relations.”

Nevertheless, the Iraqi border crossing is not operational yet, and the Kurdish Hawar News Agency — close to the PYD — claimed that Barzani might pressure Maliki to keep the border crossing closed in exchange for his support for Maliki to lead the next Iraqi government. New talks are currently taking place between Iraq and the Turkish government after a visit of Iraqi Foreign Minister Hoshyar Zebari to Turkey on Oct. 26.

The capture was also seen by some as a message to Massoud Barzani by the PYD. “It is a response and a message to the KDP and Barzani after a recent conflict between them and expresses the fact that they can have another important border with Iraq instead of the Semalka crossing,” said Zara Saleh, a member of the Kurdish Unity Party, based in the United Kingdom.

On Oct. 23, Muslim was barred from entering Iraqi Kurdistan at the Semalka border crossing, with the KDP accusing the PYD of capturing Kurdish areas with the help of the Syrian government and excluding other Kurdish parties from power. After the incident, the border crossing was closed by both sides.

“The PYD is fighting for the interests of the regime and working closely with it. The PYD is not respecting the will of the Kurdish people,” said the KRG statement as reported by the World Bulletin.

Abdulsalam Ahmed, the co-chair of PYD People’s Council of West Kurdistan, in an interview with Rihab News said that they hope the opening of the Yaroubiya border crossing can alleviate the suffering of the Kurds in Syria, who are preparing for winter and need aid, electricity generators and food supplies. But he said they are still waiting for the approval from Baghdad despite negotiations with them.

Abdulsalam Ahmed told Al-Monitor, "The border is practically closed by the KRG because of preventing the passing of humanitarian aid and border trade. There are attempts to open other parts of the border crossings with Iraq and Turkey. There is no news yet, but it will be announced once there is an agreement.”