The Democratic Union Party (PYD) is proceeding with its plans for a transitional government in the Kurdistan region of western Syria, despite the opposition of the Kurdish National Council and Iraqi Kurdistan President Massoud Barzani. 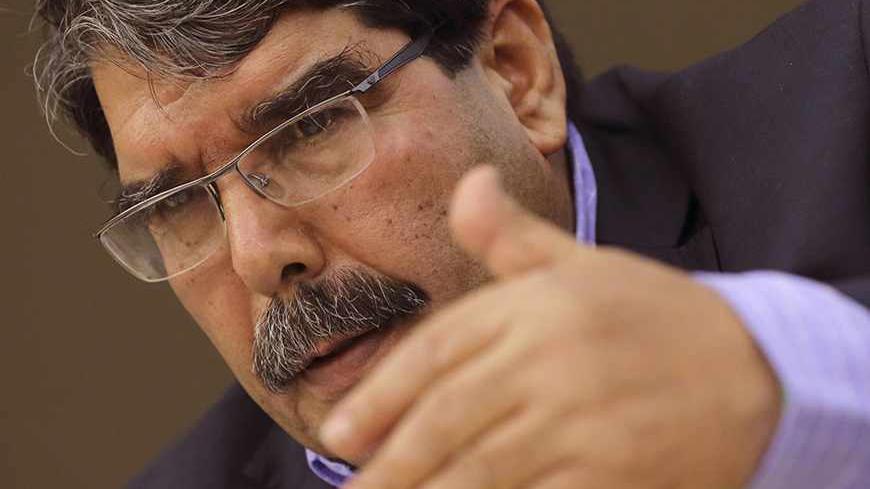 The Kurdish parties from Iran, Iraq, Syria and Turkey reacted differently toward the announcement — Kurds are landlocked and divided over these countries. The Kurdish parties tried to overcome these divisions by holding a national congress on Nov. 25-27, which was, however, indefinitely postponed for the third time as a result of external pressure and internal Kurdish rivalry.

The main reason for these divisions is the tension between the PYD, affiliated with the Kurdistan Workers Party (PKK) led by imprisoned Abdullah Ocalan, and the KNC, which is backed by the Kurdistan Democratic Party (KDP) and led by Kurdistan Regional Government (KRG) President Massoud Barzani.

As a result of these tensions, on Oct. 23 the KDP refused PYD leader Saleh Muslim entry into Iraqi Kurdistan after he visited Syria for the funeral of his son who was killed fighting al-Qaeda. This sparked a media war between the PKK and KDP.

Fuad Hussein, chief of staff to Barzani, admitted in an interview with the KDP-affiliated Rudaw media organization that the delay was related to tensions inside Syria between the PKK and KDP.

“The issue in Rojava [the western part of Kurdistan, or Kurdish areas in northeast Syria] is big, and unless it is solved we can't hold the congress,” Hussein said.

In Iraq’s autonomous Kurdistan region the seats are divided between the two ruling parties, the Patriotic Union of Kurdistan (PUK) led by Iraq's President Jalal Talabani, the KDP led by Barzani and a number of opposition parties.

In the Sept. 21 elections for the 111-seat parliament in the Kurdistan region, the KDP increased its number of seats from 30 to 38, while the reformist movement — the Change List — won 24, taking the PUK’s place as the Kurdistan Region of Iraq’s second-largest party.

Both the PUK and the Change List have been supportive of the PYD. Their goal is to counterbalance KDP influence in Iraqi Kurdistan in an attempt to gain more popularity. Moreover, while the KDP is closer to Turkey, the PUK is closer to Iran.

For instance, on Nov. 15, KNN TV — affiliated with the Change List — quoted Muslim as accusing the KDP of working "in line with the enemies’ plans [referring to Turkey]."

Mohammed Kayani, a member of the Iraqi parliament for Gorran, told Al-Monitor, “We clearly support this administration, which fills the administrative, political, military and security vacuum in the area.”

Also, PUK member and Kirkuk Gov. Najmaldin Karim supports it. "The success of the temporary government of Rojava is the success of all Kurds," Karim told a PUK TV channel.

Unsurprisingly, the PUK and the Change List were also quite critical of Barzani's joint visit with Turkish Prime Minister Recep Tayyip Erdogan to Diyarbakir, the main Kurdish city in southeastern Turkey. They saw this as a KDP attempt to cement economic ties and as Barzani being used by Erdogan to get more Kurdish votes for the upcoming elections in March 2014. In general, the PUK and the Change List media ignored the visit.

The PUK and Change List's reaction to the crisis in Syria is quite different from the KDP’s negative reaction to the PYD plan. Barzani, in a statement, accused the PYD of supporting the Syrian government.

“The Syrian regime has offered no rights to the Kurds for the PYD to offer its support to the regime. This is at a time when the Syrian opposition also considers the Kurds to be siding with the regime, and this will present our people with major problems in the future. As a result of the PYD joining the war, tens of thousands of Syrian Kurds have become refugees," Barzani said.

Mohammed Ismail, a member of the Kurdish Democratic Party of Syria (KDP-S) — funded by Barzani — is critical of the Iraqi Kurdish opposition.

“What Gorran sadly does is not only oppose. It acts as a reaction against Barzani’s history, and because Gorran is close to the Iranian regime, it acts this way,” he told Al-Monitor in the Kurdistan Region of Iraq's capital Erbil.

Salih Gheddo, leader of the Kurdish Democratic Left party — a KNC party more sympathetic to the PYD — is critical of the KDP. “The KDP interferes more than the PUK and has a larger influence in Syria, but the position of Gorran [Change List] on west Kurdistan is very good,” he told Al-Monitor in Erbil.

But Gheddo did not know anything about the position of Islamic parties that are part of the opposition.

The Kurdistan Region of Iraq's main Islamist parties increased their number of seats in parliament, with the Kurdistan Islamic Union — affiliated with the Muslim Brotherhood — winning 10 seats, while the Kurdish Islamic Group won six seats. Some individual Kurds joined the fight against Syrian President Bashar al-Assad in Syria and also engaged in fighting against the PYD.

Muhammed Hakim Jabar, spokesman of the Kurdish Islamic Group, said that while it recognizes the PYD administration, “We emphasize that it should be with the co-operation of all parties [referring to the KNC]. At the same time, the KRG must have a positive role without taking sides [in internal disputes] of any political parties there.”

Kurdish parties from Iran and Turkey reacted depending on their affiliations. The Turkish Kurdish Peace and Democracy Party (BDP) and Iranian Kurdish Free Life Party of Kurdistan (PJAK) — both close to the PKK — supported the administration.

“The Free Life Party of Kurdistan supports the declaration of democratic self-rule in Rojava,” the PJAK said in a statement.

But five other Iranian Kurdish parties are suspicious and think the PKK has some links to the Syrian government and Iran, although the PKK rejects these accusations as Turkish propaganda.

While these parties are just as disunited as those in Syria, most of them agreed on trying to exclude the PJAK from the Kurdish Congress, as a result of their anti-PKK stance.

Sharif Behruz, a Canada-based member of the Democratic Party of Iranian Kurdistan, told Al-Monitor that the Kurdish parties from Iran are usually silent about Syrian Kurds, but that they are opposed to any PKK "interference" in Syria and Iran.

“Kurdish forces — whether the PYD or anyone else — should work with other opposition groups for regime change. Moreover, it is not very inclusive, they have excluded a lot of Kurdish parties.”

These Kurdish divisions show that the Kurds have not been able to find one voice yet, due to political party differences and geography. It shows that it is unlikely they will unite in the near future.