The Kurdish National Congress, to be held in the Iraqi Kurdistan Region on Aug. 24, will seek a common agenda for Kurds divided over the war in Syria. 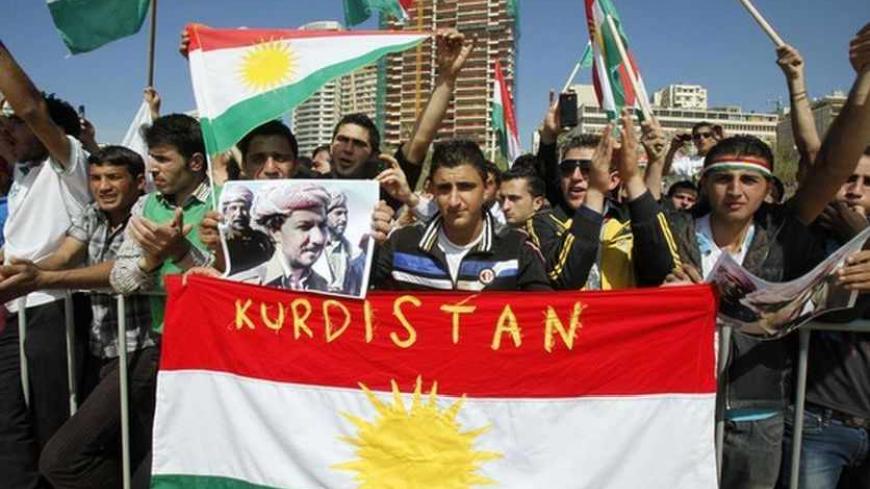 Men hold Kurdish flags and a poster of Kurdistan leader Massoud Barazani during a Nowruz celebration organized by Kurdish groups at the seaside town of Rawshe in Beirut, March 21, 2013. - REUTERS/Sharif Karim

Though the Kurdish National Congress may dream to unite the Kurds and have a common Kurdish strategy in their struggle in the new Middle East, intra-Kurdish politics and conflicts in each part of Kurdistan may make this impossible.

For the first time in modern Kurdish history, on July 22, representatives of Kurdish political parties from four parts of Kurdistan met in Erbil to negotiate the foundation of the Kurdish National Congress, which has been the dream of Kurdish people for the past three decades. The organizing committee has decided that a three-day conference for the congress will take place Aug. 24 in Erbil, with the participation of 500-600 members.

The congress is coming into existence amid tense political and ideological conflicts among Kurdish political parties, in addition to the political conflicts between Kurdistan Regional Government (KRG) President Massoud Barzani and the Kurdistan Workers Party (PKK)'s jailed leader Abdullah Ocalan over the quest for hegemony over Rojava (Syrian Kurdistan).

Surprisingly, conflicts soon emerged when it was decided at the meeting that the congress will consist of 21 members: six members from Kurdish political parties in Turkey, five from the Kurdistan Region of Iraq, four from Syrian Kurdistan, five from Iranian Kurdistan and one member to represent Kurds in Europe.

The conflicts intensified when Iraqi Kurdistan's political parties divided their five seats, and the opposition parties announced a boycott over the hegemony of the two ruling parties, the Kurdistan Democratic Party (KDP) led by Barzani and Patriotic Union of Kurdistan (PUK) led by Iraqi President Jalal Talabani. The KDP and PUK each got a seat, whereas the three main opposition parties — the Gorran Movement, Islamic Union and Islamic Group — only got two, and the Islamic Group was excluded. Afterward, the opposition boycotted the meeting, but they were ultimately convinced to participate during follow-up meetings with the two ruling parties.

In Iranian Kurdistan, the two Democrats — the Kurdistan Democratic Party and the Kurdistan Democratic Party of Iran — and the three Komallas (the defunct Komalla party has been divided into three wings) excluded their main rival, The Party of Free Life of Kurdistan (PJAK), which is considered the PKK’s Iran wing. The older Kurdish Iranian parties are totally against the existence of PJAK, as it is ideologically and officially affiliated with the Kurdistan Communities Federation (KCK), which manifests Ocalan’s ideology.

The leadership of the congress

In the aftermath of the meeting of the Kurdish political parties in Erbil, including PKK’s representative, Turkey has shared its concerns regarding the congress.

In an unexpected visit, KRG Prime Minister Nechirvan Barzani rushed to Ankara on July 30 to "ease Turkey’s concerns regarding the Kurdish National Congress," Turkish media reported. It was also reported that Turkey has okayed the congress on the condition that Barzani is president.

The Kurdish political parties became suspicious of Barzani’s relations with Turkey as he monopolized the congress.

Cemil Bayik, KCK’s co-chairman, gave his first interview to the Gorran Movement’s KNN TV and clearly announced that the PKK will not allow any political party to usurp its policies over the congress. He suggested that the presidency of the congress should be democratic like the European Union presidency, rotating every six months to different figures.

The Kurdish opposition parties in the KRG are totally against Massoud Barzani’s presidency of the congress.

Hama Tofiq Rahim, one of the leading leaders of the Gorran Movement expressed his views concerning the presidency of the congress in an Aug. 6 call to Al-Monitor. Rahim underscored that “Massoud Barzani can only participate to the conference as a KDP leader, not as the Kurdistan Region's president.”

At the same time, he said that the presidency of the congress should not remain in the hands of one person, in a sign that he supports Bayik’s suggestion.

Since the Kurdish uprising started in Kurdish areas of Syria, the KDP and the PKK have tried to control Rojava. The Democratic Union Party (PYD) — which is affiliated with the PKK — controls most of that part of Kurdistan, a situation the KDP finds intolerable. In response, the KDP has tried weakening the PYD’s hegemony through its affiliated groups.

A petition campaign by 100 Kurdish activists holds that the congress will be useless if the KDP does not open the borders for Rojava's Kurds.

Meanwhile, KCK Co-chairman Bayik wrote an article on Aug. 5 that was widely spread by Kurdish media, calling on the KDP to stop "the conspiracy against Rojava.”

“The KDP is a part of the conspiracy against the Kurdish people of Rojava,” wrote Bayik on the pro-PKK website Firat News on Aug. 5.

He harshly criticized the KDP for taking part in the fight against the Kurds, saying, “In this dirty war against Rojava Kurds, the KDP is more guilty than Turkey and Kurdish enemies. In this difficult situation, the KDP has put sanctions on Rojava [by closing the border].”

Eminki told his party’s official website that Bayik’s comments “do not serve the current Kurdish case in Rojava.” He also criticized Bayik for not working harder for national unity.

The Kurdish political parties have different political ideologies. The ideology of Ocalan will be the leading ideology of the parties that take part in the congress, as the KCK has affiliated parties in Syria, Turkey, Iraq and Iran. However, there will also be Islamic parties that want to integrate Islam with Kurdish nationalism.

Mustafa Hijri, the leader of the Kurdistan Democratic Party-Iran, told the KDP's official station, Kurdistan TV, that none of the political parties should force their political views on the others.

Abubakr Karwani, a member of the Islamic Union’s politcal bureau, said that the Islamic Union will focus on the integration of Isam with Kurdish nationalism, and that this “will be their concern in the congress.”

Karwani told Al-Monitor that the congress should contain all the political ideologies so as not to ignore anyone in the struggle for freedom.

While other regional countries — in particular Turkey and Iran — are concerned about the national congress that may lead to inspiring the Kurdish populations in their countries, Kurdish people are concerned that it may itself end the dream of Kurdish unity.

Kamal Chomani is a Kurdish journalist writing on the political affairs of the Kurdistan Regional Government and covering Kurdish politics in Iraq, Iran, Syria and Turkey for leading impartial Kurdish media outlets. Chomani has had a regular column for The Kurdistan Tribune since 2010. On Twitter: @KamalChomani