As long as the Assad regime and the opposition fail to come to an agreement, Syria’s Kurds will continue to consolidate their gains. 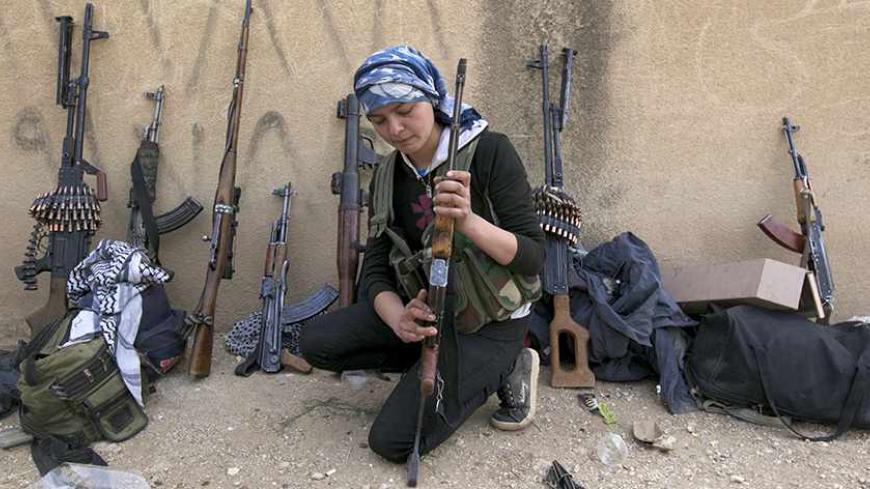 A Kurdish female fighter from Kurdish People's Protection Units (YPG) checks her weapon near Ras al-Ain, in the province of Hasakah, after capturing it from Islamist rebels, Nov. 6, 2013. - REUTERS

As the proposed Geneva II conference which is expected be held on Jan. 22 — not in Geneva, but in Montreux for lack of hotel space — draws nearer, Syria’s Kurds are scrambling to secure a seat at the negotiating table.

Saleh Muslim, the co-chairman of the most influential Syrian Kurdish party, the Democratic Unity Party (PYD) told Al-Monitor in an exclusive interview in Brussels on Dec. 7, that Geneva II represents an historic opportunity for his people to press for their long suppressed rights.

“We will not allow Geneva II to become another Lausanne,” he added, thumping a chubby fist.

Muslim’s main concern is to cement the big gains made by Syria’s Kurds since the start of the civil conflict nearly three years ago. With the PYD and its military wing, the People’s Protection Units (YPG), in the driver's seat, Syria’s 2 million or so Kurds have established their own interim administration in a Kurdish belt stretching from Derik in the northeast to Afrin in the northwest, bisected by Arab settlements in Raqqah and Aleppo provinces.

The PYD has been furiously lobbying to unify all of the Syrian Kurdish groups to take part in Geneva II in a delegation composed solely of Kurds and under the banner of the Supreme Kurdish Council that was established in 2012 under the sponsorship of Massoud Barzani, the president of Iraq’s Kurdistan Regional Government (KRG). “It is not so much the outcome of Geneva II but our status at the talks as a separate and equal entity that concerns us Kurds the most,” Muslim explained. But bitter divisions among the Syrian Kurdish parties and stiff opposition from Turkey and other regional powers have stood in the way.

Now those differences are said to be melting as PYD representatives continue talks in the KRG capital Erbil with officials from Barzani’s Kurdistan Democratic Party (KDP), who are mediating on behalf of Muslim’s Syrian Kurdish rivals. These groups accuse the PYD of using intimidation tactics and concentrating power in its own hands. These allegations have been echoed by the KDP, whose relations with Muslim’s group have grown increasingly acrimonious over the past months.

Unusually, it was neither Muslim nor his decidedly weaker rivals but the Kurdistan Communities Union (KCK), the umbrella group for the numerous wings of the Kurdistan Workers Party (PKK), which first commented on the meetings in Erbil. In a statement on Dec. 12, the KCK’s executive committee said that it fully supported the KDP-mediated talks and suggested that the Supreme Kurdish Council resume its functions, although squabbles between the PYD and its rivals rendered the agreement obsolete. “If a common stand is adopted on Geneva and the interim administration is strengthened as a result of these talks they will play a seminal role in the resolution of the Kurdish problem and in the democratization of Syria,” the KCK added.

The PYD has long been accused of being the Syrian franchise of the KCK/PKK.

It is an open secret that PKK fighters and commanders are helping the YPG in their ongoing turf war against the al-Qaeda-linked Islamic State of Iraq and al-Sham (ISIS). Yet the PYD denies it has any links with the PKK, mainly because the PKK is officially designated as a terrorist group by Europe and the United States and it fears ending up with the same label.

The KCK statement clearly demonstrates the extent to which the politics of the Kurds of Syria, Turkey and Iraq are intertwined. It is also a bold admission of its influence over the PYD and the Syrian Kurds. Why it chose this moment to do so is a matter of intense speculation. One theory is that it is making a virtue of necessity: The PYD has no choice other than to kiss and make up with its rivals if it wants a seat at Geneva. Otherwise, the United States and Turkey will continue to veto its participation. The PYD had until recently counted on Russian support; but the Russians are said to be telling the PYD not to raise the issue of Kurdish rights in Switzerland. “As usual, the big powers have shaken hands under the table and the Kurds are the first to be sold out,” fumed a Syrian Kurdish activist, who declined to be identified by name.

Muslim flew to Moscow on Dec. 15 for consultations amid reports that the Russians were demanding that PYD join the Geneva talks as part of the National Coordination Body for Democratic Change, the umbrella group which favors nonviolent opposition against the regime, leading to charges that it is an “Assad front.”

Another theory is that the PKK is pressuring the PYD to make peace with Barzani in a bid to outmaneuver Recep Tayyip Erdogan, the Turkish prime minister, who invited the Iraqi Kurdish leader to Turkey last month. The two men presided over a mass rally in the Kurds’ unofficial capital, Diyarbakir, as a pair of popular Kurdish bards belted out nationalist songs that previously would have landed them in jail. The move caught the pro-PKK Peace and Democracy Party (BDP) completely off guard.

In a countermove, Diyarbakir’s mayor, Osman Baydemir, and lawmaker Leyla Zana, who were the sole BDP politicians to meet with Barzani in Diyarbakir, persuaded him to resume his mediating role. “Now Turkey’s plans to divide and rule the Kurds have been foiled,” gloated a Kurdish tweeter following the KCK’s announcement.

Yet for all the positive noise coming out of Erbil, it seems unlikely that the talks will have much impact on the ground. The UN has started flying in aid to the Syrian Kurds. The Iraqi Kurds’ sealing of its common border with the PYD-controlled region is therefore poised to lose effect.

“The situation in Rojava will remain unchanged by Erbil,” predicts Barzan Iso, a Syrian Kurdish activist. In other words, the PYD will continue to call the shots. And for as long as the Assad regime and the opposition fail to come to an agreement, Syria’s Kurds will continue to consolidate their gains. Few believe the Geneva II talks will result in a deal. Hopes have been further dimmed by the recent setbacks suffered by Gen. Salim Idriss and his Free Syrian Army moderates at the hands of the Islamic Front.