An agreement between the Kurdistan Workers Party and Iraqi Kurdistan President Massoud Barzani is an attempt to form a unified front heading into Geneva II. 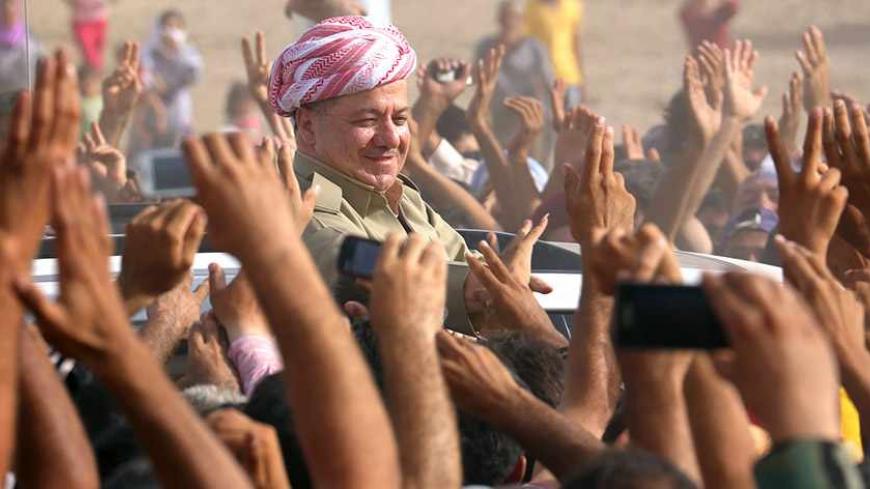 WASHINGTON — According to a statement by the rebels of the Kurdistan Workers’ Party (PKK), Kurdish President Massoud Barzani’s Kurdistan Democratic Party (KDP) and the PKK have reached an agreement to unite Syria's Kurds for the upcoming Geneva II conference on Jan. 22 and will revive an earlier agreement by the Kurdish parties of Syria, after months of conflict. On Dec. 17, the Syrian Kurdish parties will have a bilateral meeting.

The agreement comes after the Kurdish parties realized disunity would harm their achievements in Syria and therefore started to negotiate. However, there is no official agreement yet between the Kurdish parties from Syria, and the KDP and PKK have different policies toward Syria and Turkey. The PKK and Turkey have been in conflict for years, while Barzani is trying to build relations with Turkey.

The Kurdish news network Rudaw reported that two senior Kurdish officials of the pro-Kurdish Peace and Democracy Party (BDP) from Turkey, Osman Baydemir, the mayor of Diyarbakir, and Kurdish parliament member Leyla Zana visited Erbil to resolve the differences between the Syrian Kurds, the KDP and PKK.

The Syrian Kurdish parties, the Kurdish National Council (KNC) backed by Barzani and the Democratic Union Party (PYD) backed by the PKK were supposed to work together after the July 2012 Erbil agreement supervised by Barzani, but tensions remained ever since. Nevertheless, several sources confirm that the KDP and PKK remained in contact, despite statements against each other in the KDP and PKK-affiliated media.

Leyla Zana said, “The greatest shame is for Kurds to turn their backs on each other. All the parties are prepared to come together within the framework of the [Erbil] agreement. As two representatives of the Kurdish people, we wished to share this joy with them. I hope and believe that a meeting of all the parties will take place soon."

The executive council of the PKK, the Kurdistan Communities Union, admitted in a statement that there was pressure from Kurds on the Kurdish political parties to reach unity.

“Our people in the four parts of Kurdistan were deeply concerned about the disunity and the incompatibility leading to the weakening of the revolution. The disunity and disarray in Rojava [Syrian Kurdistan] was not only weakening the Rojava revolution [in Syria], but also creating problems in the route to national unity.”

The PKK said that there were efforts to bring the Kurdish parties together again, explaining, “As a result of the contacts and meetings between the PKK and KDP, holding a meeting between both of the Rojava assemblies and the revival of Supreme Kurdish Council (SKC) was ensured. This is a very important step.”

“We attended the [Erbil] meeting because we respect all the Kurdish parties. We hope that Qamishli will become a center of conflict resolution. We are not against Kurdish parties who want to help us solve the problems, and we as parties and organizations of Rojava have the power to decide.”

The PYD co-chair, Salih Muslim, also welcomed the agreement and said the revival of the SKC would be a crucial step for the unity of the Kurdish people.

UK-based PYD representative Alan Semo told Al-Monitor that the PYD has three demands from the KDP, including the recognition of the PYD plan to form an interim administration in Syria. He said, “The SKC should be recognized formally as a legitimate Syrian Kurdish representative, and its objectives should be respected and supported by Kurdistani parties.”

Nevertheless, there have been no official meetings yet between the main Syrian Kurdish leader, Salih Muslim, and Barzani, despite a report by Rudaw quoting Barzani’s chief of staff Fuad Hussein as saying that a meeting was planned between Muslim and Barzani.

The PYD’s spokesperson in the Iraqi Kurdistan Region, Jaaffar Akash, told Kurdpress, “The report is false, and Salih Muslim has no plan to meet Barzani. Salih Muslim essentially has nothing to do with the region.”

Washington-based Kurdish journalist Mutlu Civiroglu, who met Muslim in Brussels, told Al-Monitor, “There is no confirmed meeting between Barzani and Muslim yet. But it is possible that such a meeting takes place soon."

However, Jehad Salih, a Syrian Kurdish analyst, thinks this will be difficult, since the PKK wants to use the Syrian Kurds to pressure Turkey. He said, “I think Barzani and the PYD cannot make any agreement, because the PYD has a relationship with the [President Bashar] al-Assad regime.”

Although Barzani and the KNC have accused the PYD of having ties with the Syrian government, the PYD has denied this and actually accused the KDP of working too closely with Turkey against Kurdish autonomy in Syria.

The KDP wants cooperation with Turkey to decrease the KRG’s dependence on Baghdad’s budget and export its oil and gas to and through Turkey.

“Through landmark energy cooperation with Turkey, we are showing the other face of the new Iraq,” said Prime Minister Nechirvan Barzani at the Kurdistan-Iraq oil and gas conference on Dec. 2.

Senior PKK leader Zubeyir Aydar told Al-Monitor in Brussels that Turkey cannot build relations with Kurds in Iraq and fight Kurds in Turkey, saying, “We always think neighboring regions should advance relationships, and we support it. But we think that this improvement should help solve the Kurdish question in North Kurdistan [the Kurdish areas of Turkey]. It’s a universal principle to gain dialogue.”

On Monday, Barzani chaired a meeting between the Kurdish parties from Syria and they decided to hold a bilateral meeting on Dec. 17.

It remains to be seen if the Kurds will be able to unify their ranks.