Syrian Kurdish forces navigate the fighting between the Free Syrian Army and the Islamic State of Iraq and al-Sham to gain ground in northern Syria. 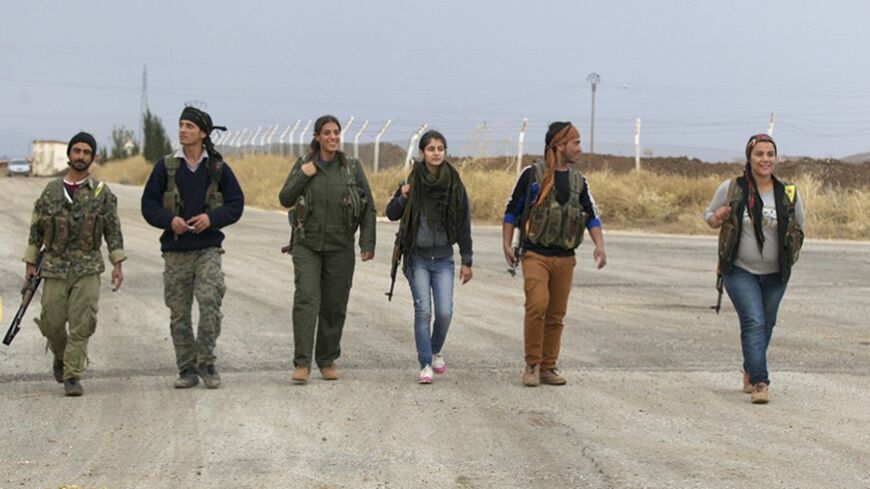 Clashes erupted between Islamist groups in the north of Syria on Jan. 3, leaving at least 700 dead. For more than a year, armed groups have imposed a blockade on the isolated Kurdish enclaves in Afrin and Ain al-Arab (Kobani) to pressure the Syrian Kurdish fighters to give up their territory. Syrian Kurds now hope the clashes between the Islamist groups will end the siege on their regions.

Last summer, clashes erupted between Kurdish forces, the People’s Protection Units (YPG) — which are close to the Democratic Union Party (PYD) — and al-Qaeda-affiliated battalions and other Islamist groups. This led to a siege on the isolated Kurdish regions of Afrin and Kobani by Islamist groups accusing the YPG of working with the Syrian regime. Moreover, several civilians were kidnapped and others executed on charges of working with the Kurdistan Workers Party (PKK), to which the PYD is affiliated.

Despite a shared secular ideology of the YPG and the Free Syrian Army (FSA), the FSA joined forces with other Islamist rebel groups to attack the Syrian Kurdish groups. This led to the expulsion of the PYD-linked FSA, Jabhat al-Akrad (Kurdish front), from several mixed areas by the FSA and al-Qaeda groups last summer.

As a result, the Kurdish front largely stopped their joint operations with other armed groups against the Syrian government in the provinces of Raqqa and Aleppo, but now it cooperates again with the FSA against the Islamic State of Iraq and al-Sham (ISIS), carrying out operations in Tel Ebyad, Jarabulus and Aleppo.

PYD UK-based representative Alan Semo told Al-Monitor that al-Qaeda-affiliated battalions drove out Kurds in mixed areas such as Tel Ebyad and Al-Bab, where fighting is now taking place between Islamist battalions, to "keep access to the Turkish border, where they got their weapons from."

He claimed the Islamist groups imposed a blockade on Kobani and Afrin, since the Kurdish YPG forces increasingly made gains to connect the Kurdish enclaves of Afrin, Kobani and Hassakeh, which are separated from one another by mixed areas in Azaz, Jarabulus and Tel Ebyad close to the Turkish border.

“These areas are very strategic and if the Kurdish forces manage to get control, this would mean the ISIS and [Jabhat al-] Nusra would cease to exist, since access to the Turkish border areas would be cut,” Semo said.

Moreover, several Kurds and Arabs were freed from ISIS prisons in Jarabulus, which was achieved through a joint cooperation between the FSA, Jabhat al-Akrad and the Islamic Front.

Zaniar Ali, a member of the Kurdish Youth Movement (TCK) in Afrin, told Al-Monitor that the situation has improved. “It’s kind of better, because the ISIS lost control of the road between Aleppo and Afrin and vaccines have arrived for the children."

Aymenn al-Tamimi, an expert on jihadists with the Middle East Forum, told Al-Monitor, “The Kurds can feel more secure in their positions in Aleppo province. But to be frank, they were doing well anyway; the ISIS had been having a hard time to make any breakthroughs in Afrin. At this time, the ISIS has stopped mortar rounds into YPG territory because it is distracted by infighting.”

Edris Salem, a TCK member in Kobani, told Al-Monitor that the fighting would help the Kurds and decrease the pressure on them.

“The Islamic Front may try to forge an alliance with the Kurds, especially after they found out about the strong relationship between the regime and the ISIS. And also when they saw Jabhat al-Akrad ally with the Islamic Front against the ISIS in Aleppo and Raqqa.”

Sheruan Hassan, a member of the PYD's diplomatic relations in Europe, told Al-Monitor that the relationship between Kurds has improved in Aleppo province but not in Raqqa and Hassakeh, as a result of "Arab chauvinism."

But he noted that the main opposition bloc, the Syrian National Coalition, has a double position despite the fact that Kurds have been fighting the ISIS for more than a year.

In January, the Syrian coalition accused the YPG of holding a joint offensive with Assad’s forces in the town of Tel Hamis, in Hassakeh. “We call on the FSA to close ranks and to fend off attackers attempting to take control of the strategic town, across which oil supply lines run.”

The YPG reacted in a press statement accusing the opposition of “fighting ISIS in Aleppo, Idlib and many other places in Syria, but at the same time, it [the coalition] supports the ISIS in its fight against the Kurds in the liberated areas.” The YPG denies any relation with the Syrian regime.

An anonymous activist told the Kurdish nongovernmental organization Kurdwatch that not only the ISIS fights against the YPG in the countryside of Qamishli but also FSA groups; while in Aleppo, Idlib and Raqqa, the FSA-affiliated units fight against the ISIS.

The YPG withdrew from Tel Brak and Tel Hamis after suffering severe losses, and 39 fighters were buried in Qamishli on Jan. 15.

After the fighting, the Hassakeh ISIS branch and four rebel groups including the Islamic Front announced they would form a joint operations room against the YPG and the Kurds. Moreover, the Islamic Front released a statement accusing the PYD of "aiding the oppressor to increase the administrative and military privileges granted to it by the regime.”

“It is not concealed from you that what is happening in the [Jazira] region is a revolution against oppression and tyranny, and there is no ethnic face to this conflict."

Therefore, it is unlikely that the cooperation would last between Islamist groups and the Kurds in Syria in their fight against the ISIS. While the Kurdish nationalist groups agree on a federal secular Syria with autonomy for Kurds, the Islamist groups want to build a state based on Islamic law and oppose any form of ethnic nationalism.

“They are fighting for their interests — who controls the land — and it’s not connected to the Kurds. … Both are against the Kurds, but maybe we will reap some benefits from this conflict,” said Zara Saleh, a representative of the Kurdish Unity Party based in Britain.