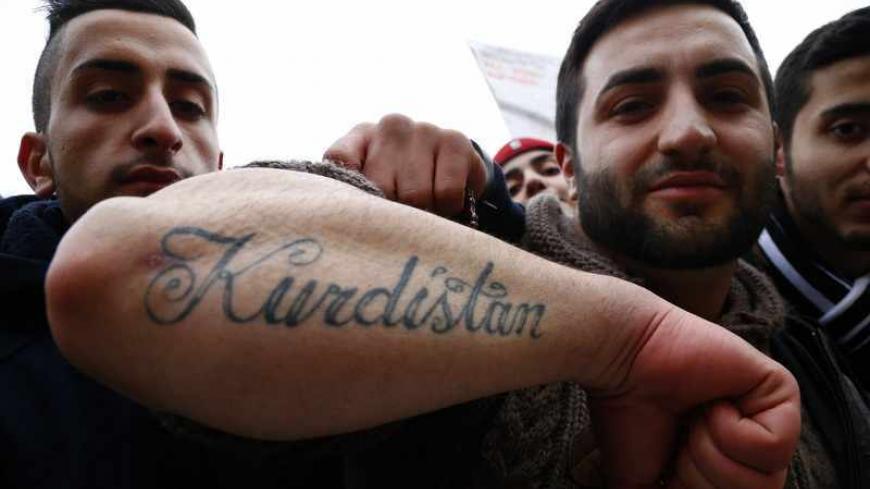 A pro-Kurdish demonstrator displays his tattoo as he attends a rally marking the 20th anniversary of the introduction of a ban of the Kurdistan Workers Party (PKK) in Berlin, Nov. 16, 2013. - REUTERS/Tobias Schwarz

BEIRUT — The main Kurdish militia in Syria, the People’s Protection Units (YPG), has plans to take over mixed areas inhabited by Arabs, Turkmen and Kurds to make a contiguous Kurdish region. This would make the plan to create a de facto Kurdish government in northern Syria more feasible despite opposition by Turkey and other Syrian rebels.

For now, there are three Kurdish enclaves controlled by Kurdish fighters, separated by the Arab-dominated areas of Tel Abyad, Jarabulus and Azaz, where al-Qaeda-affiliated groups are strong.

The Democratic Union Party (PYD), which is the strongest Kurdish party in Syria and affiliated with the YPG, announced on Nov. 11 they would form three cantons in cooperation with local Christians, Arabs and Chechens in the PYD-controlled Kurdish areas in the province of Hassakeh, Afrin and Kobane (Ain al-Arab), which is located in the province of Aleppo.

YPG spokesperson Redur Xelil, in an interview with Kurdish journalist Mutlu Civiroglu, confirmed the YPG wants to connect these areas. “Of course, liberating Tel Abyad is included in the YPG plans. I want to be clear that when the time and conditions are right, we will liberate Tel Abyad, too.”

He added, “Those regions are between the cities of Serekaniye [Ras al-Ain], Kobane [Ain al-Arab] and Afrin. For these cities to be connected and for there to be no problem in transportation between these cities, Azaz and Jarablus must be liberated, too.”

In another interview with the Wall Street Journal, Xelil indicated that they control 70% of Syrian Kurdish territory and that they are preparing plans to take control of it all.

Currently, the Kurds have problems providing support to these separated areas, which are often under embargo by Turkey and the Kurdistan Regional Government of Iraq, as well as subject to attacks by Islamist rebels. Turkey has opposed any de facto Kurdish government in Syria and fears the influence of the PYD, since they are affiliated with the Kurdistan Workers Party (PKK) that withdrew its fighters from Turkey as part of a peace process launched in 2012.

The PKK leadership, in its latest statement on Nov. 14, accused Turkey of being responsible for a suicide bombing in the city of Kobane that killed 14 people. The bombing came after the YPG expelled al-Qaeda-affiliated fighters from several towns and villages in the province of Hassakeh.

“The Turkish state was the first to oppose the demand of the Rojava people to establish their own democratic self-rule. Therefore, this is concrete proof for its enmity against the Rojava revolution,” the PKK said.

The Turkish government opposes any form of Kurdish autonomy. In July 2012, Yalcin Akdogan, a main adviser to Turkish Prime Minister Recep Tayyip Erdogan, wrote that "new Kandils cannot be permitted" in Syria — a reference to PKK bases in Iraq. He wrote that although the Syrian Kurds live in northern Syria between Afrin and the city of Qamishli, they do not have an unbroken belt or separate region as do the Kurds in Iraq. But the YPG wants to connect these areas and are trying to get more support from Arab tribes to fight against al-Qaeda.

On Nov. 1, the YPG created an Arab brigade called Ahrar al-Watan, led by Hawas al-Akub. The YPG managed to take over the Iraqi border crossing in Yaroubiya with the help of Arab tribes on Oct. 24. They might want to use Arab fighters and create local councils consisting of Kurds and Arabs to rule over there areas.

It might be difficult for the YPG to take over these areas without support of local Arabs and Turkmens. The YPG was able to take over the mixed areas of Yaroubiya and Ras al-Ain before as a result of the support of local Arabs. But the Islamist groups are still quite strong in Tel Abyad, Raqqa and Azaz. Last summer, the Islamist groups expelled the PYD-linked Free Syrian Army (FSA) group, Jabhat al-Akrad, from these mixed areas in Aleppo and Raqqa.

Usama Hilali, head of the small Kurdish FSA group — the Mashaal Temmo Brigade — whose group was expelled from Ras al-Ain by the YPG, thinks it would be difficult for the PYD. “It is not possible for them now,” he said, accusing the regime of supporting them.

He claimed that if the FSA is able to take over Aleppo, Deir al-Zour and Raqqa, then “the liberation of each of these areas will be the beginning of the end for the PYD shabiha."

In an interview with Al-Monitor, Khaled Khoja, a member of the Syrian National Coalition in Turkey, accused the regime of supporting the PYD interim government plan to get Kurdish support after repressing the Kurds for years.

“I don't believe that this announcement is applicable under the oscillation of power over the northern area among many parties, in addition to the ethnic variety that inhabits it. This is not to mention the internal divisions among the Kurds themselves, and whether or not regional states and the Syrian regime itself would allow such a move or not,” said Khoja.

Syria expert Fabrice Balanche told Al-Monitor, “The YPG is able to take Jarablus because there are a lot of Kurds living there. Azaz will be more difficult because it is a Turkmen-Arab area.”

He noted, “[Syrian President Bashar al-]Assad will support this because he needs to close the Turkish border [from the Syrian opposition] if he wants to get back Aleppo and Idlib countryside. So, for the next years Assad will support it, but after the war is finished, that is another question.”