The Coalition’s quagmire with Syrian Kurds

A deeper look into local dynamics challenges the narrative that the Kurdish People’s Protection Units is the only reliable and effective ground force against the Islamic State, and raises concerns about strategic end-states. 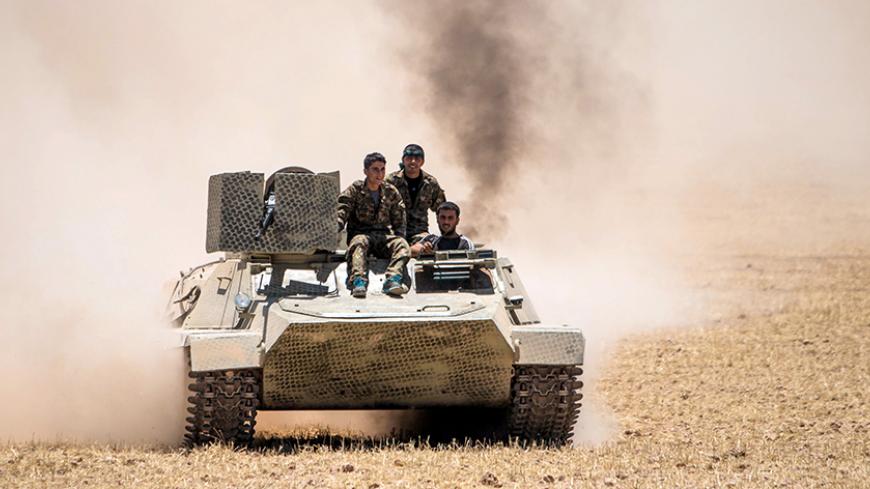 Kurdish People's Protection Units fighters drive a tank at the eastern entrances to the town of Tell Abyad in the northern countryside of Raqqa, Syria, June 14, 2015. - REUTERS/Rodi Said

Syrian Kurdish battlefield successes in the past month have reinforced Coalition efforts to liberate the Islamic State (IS) stronghold of Raqqa. Having expelled IS from safe havens in eastern Syria with Coalition military support, including the strategic border town of Tell Abyad, the Kurdish People’s Protection Units (YPG) are regarded as the only reliable and effective ground force to continue the momentum. Yet a deeper look into local dynamics challenges this narrative and raises concerns about strategic end-states. Most Sunni Arab populations may despise IS; however, they also oppose the YPG and its political wing, the Kurdish nationalist Democratic Union Party (PYD), and seek to prevent Syrian Kurds from moving forward into non-Kurdish territories. Any hopes for a Kurdish-led offensive without an effective local Arab partner will not only enhance support for IS and other radical groups, but will have a backlash on Kurdish populations and deepen ethnic, resource and territorial conflicts in Syria.

Liberating Raqqa is highly politicized and involves more than expelling IS from the region. One of the immediate aims of the Coalition and PYD is to cut IS’ supply route that is centered on Jarablus, which would leave IS with one remaining border point with Turkey at Araz. The PYD also seeks to rid all radical Islamist elements from the region beyond IS, to include the terrorist group Jabhat al-Nusra. A PYD-controlled Jarablus would link the Kurdish territories of Afrin and Kobani and create a Kurdish belt across 200 kilometers (124 miles) of border with Turkey.

Arab groups and Turkey have harshly reacted to Kurdish territorial gains. Immediately after PYD took Tell Abyad, which has a Kurdish minority population, IS retaliated with suicide attacks in other Kurdish-controlled territories in Kobani and Hasakah. Leaders from the Islamist militant group Ahrar al-Sham, which has support in Turkey, have also condemned PYD, asserting that the “territorial integrity of Syria is a red line for Syrian opposition and revolutionary forces.” Kurdish advances in Tell Abyad have also had repercussions on Kurdish-Arab relations outside of Raqqa. In Aleppo, the regional assembly of Syrian opposition forces have suspended their September 2014 agreement that allowed the PYD to administer Kurdish neighborhoods in the city. Ankara has also reacted to PYD territorial expansionism, reaffirming its demands for a 10-kilometer (6.2-mile)-deep security zone at Jarablus to prevent a Kurdish-controlled border area.

These dynamics will prevent the YPG from liberating Raqqa city — which has no native Kurdish populations — even if the Coalition intensifies airstrikes. Raqqa has symbolic value not only for IS but for Sunni Arab groups who have been resisting the Syrian regime since the civil war started in 2011. After Syrian President Bashar al-Assad’s forces pulled out of Raqqa in 2012, it was largely controlled by Ahrar al-Sham and then by Jabhat al-Nusra before being taken over by IS in 2014.

These radical groups remain powerful throughout the province and would not cede territories or resources to the Kurds, particularly given Raqqa’s strategic position on the Euphrates and its dams that source electricity and local war economies. Radical Islamic and opposition groups in the region could also mobilize local Sunni Arab tribes against the YPG and its Syrian Kurdish affiliates.

Equally problematic is how the PYD could secure and govern Raqqa and other former IS safe havens. To be sure, the PYD has attempted to create power-sharing arrangements in territories it has retaken from IS, particularly areas with mixed populations. Since expelling IS from Tell Abyad, referred to by Kurds as Girê Spî, the PYD-backed Rojava Democratic Society Movement (TEV-DEM) has brought together different communities of Armenians, Turcoman and Arabs in a localized "constituent assembly."

The PYD also continues to stress that it does not seek independence but rather distinct self-rule local administrations in collaboration with other groups. In fact, the PYG has been able to expel IS and secure territories in eastern Syria only by establishing pacts with different Syrian rebel groups and regime forces: Jabhat al-Nusra (2012 and early 2014) in Ras al-Ain (Serekaniye), Assad forces and Sunni Arab tribes in Qamishli, with the Free Syrian Army (FSA) in Kobani and Tell Abyad, and Islamic groups in Aleppo. The co-chairman of the Syrian Kurdish canton of Jazirah is the head of the Sunni Arab Shammar tribe.

Still, in Raqqa there are no Syrian opposition groups that the PYD can rely on to share power since most are dominated by Jabhat al-Nusra. FSA forces are weak and symbolic at best, reflecting the inefficacy of the train and equip program — which has trained only about 75 forces per month — and the near absence of Syrians willing to fight IS as a priority and not Assad.

These trends are shaped by regional politics and have deepened political rifts. While most Sunni Arab opposition groups regard the Syrian regime as much or more of a threat than IS, the PYD considers Assad as the only potential partner to fight IS and other radical groups. Iran also continues to influence Damascus and the Syrian Kurdish regions, both of which are at odds with the Coalition’s Sunni Arab and Turkish partners.

These dynamics have implications for US and Coalition strategy and expectations in Syria. Intensifying airstrikes against IS in the absence of reliable Arab partners and Turkish help, even in part, risks undermining Kurdish battlefield successes and creating a backlash on local populations. While coordinating with the PYD militarily, the United States should seek ways to minimize further local fragmentation by supporting shared border security, power sharing, commerce and reconstruction in IS-free territories among Syrian Kurds, Arabs and Turkey. These challenges beg the larger question of what Syria will look like once IS has been contained and who can assure local stability and under what terms. Kurdish territorial gains without sufficient local support and capacity to govern is a recipe for political failure and future instability.