Will Turkey's Jarablus win lead to showdown with Kurds?

Turkey’s incursion into Jarablus and demands that Kurdish forces retreat have shaken the balance of power in the region. 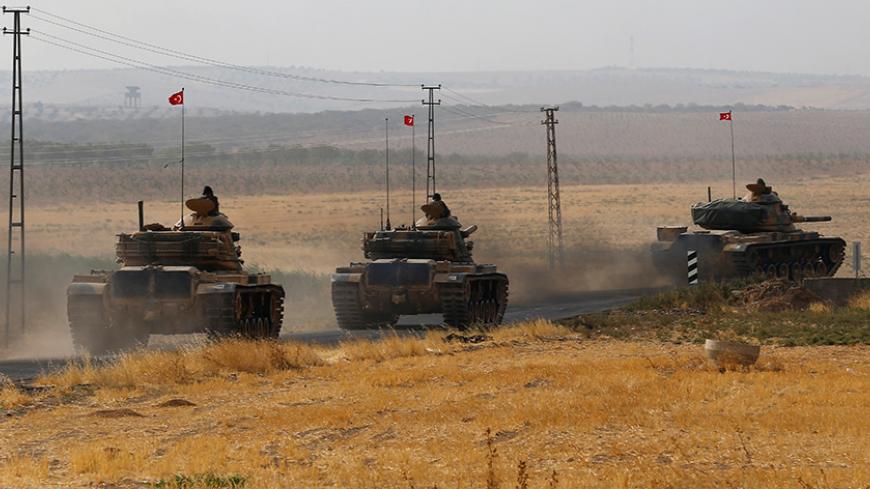 The Turkish government has made a new move in the Syrian war, continuing its involvement in the conflict. The small Syrian city of Jarablus, located 100 kilometers (62 miles) to the northeast of Aleppo and 40 kilometers (25 miles) to the west of Kobani, has become the symbol of the fight against the Islamic State (IS). On Aug. 24, groups affiliated with the Free Syrian Army (FSA) and trained by the Turkish military entered and took control. For the first time, IS militants handed over a city without putting up a fight.

Before the IS occupation, Jarablus had a population of 100,000. The Syrian regime's forces left the city and FSA groups took control on July 15, 2012. Afterward, al-Qaeda affiliate Jabhat al-Nusra took control with the support of the Turkish government. In this process, 10,000 Kurds were forced to leave and their houses were seized. Jabhat al-Nusra handed over the city to IS on Dec. 14, 2014. IS terrorized anyone who did not obey it and massacred many members of the ethnically Arab Cedawra tribe, which is influential in the region. The Turkish government raised not the slightest objection to IS back then. IS blew up the only bridge connecting Kobani and Jarablus over the Euphrates River on March 5, 2015, which made it difficult for Kurdish forces to access the area. The Turkish army’s artillery attacks disrupted the attempts of Kurdish forces to enter, and the Turkish state thus blocked the People's Protection Units (YPG) from liberating Jarablus from IS.

So why and against whom did Turkey move? Although its code name is "Jarablus," the operation has a larger goal. First, Turkey and its affiliates want to create a safe zone within the Jarablus-Azaz-Marea triangle. Azaz and Marea are currently under the control of FSA-affiliated groups, which have now captured Jarablus. The goal is to transform this safe zone into a military and political base against Aleppo and northern Syria, which the Kurds call Rojava. The Damascus regime has been inflicting heavy blows against FSA groups in Aleppo. The Syrian Democratic Forces (SDF), led by Kurdish forces, took control of Manbij and are advancing toward al-Bab in northern Syria. All of these developments reduced Turkey’s influence in the region. The SDF took the first steps toward opening a Kurdish corridor, a development that terrifies Turkey. The Turkish government had supported IS to prevent such a development, and prevented the Kurds from liberating Jarablus. Turkish President Recep Tayyip Erdogan was the first politician to object to the Kurds’ liberation of Tell Abyad.

Turkey has adopted a dual position of fighting against IS but also shelling the groups that inflict the heaviest blows against IS. As it sent FSA groups to Jarablus, Turkey, which claims that it is fighting IS in the city, shelled SDF and Kurdish forces' positions in and around Manbij.

Although Turkey pretends to take action against IS, many suspect its main target is the Kurdish people. Kurdish officials have issued several statements to this effect, among them YPG spokesperson Redur Xelil.

A few hours after the operation began, Erdogan and Prime Minister Binali Yildirim declared that their main goals were against IS and the Kurds.

Turkey and the FSA groups will not stop at Jarablus. SDF commander Dijwar Xebat has stated that these groups aim to advance toward the south, which is under SDF control, and that if they do, clashes could happen between the SDF — jointly established by Kurdish, Arab and other peoples — and the FSA, raising tensions in the region.

What will happen to IS in this scenario?

Groups affiliated with Turkey and SDF forces have been defeating IS in various locations. However, IS fights back against the SDF but not the FSA. In the end, IS will seek refuge in Raqqa once it is expelled from the border between Syria and Turkey. Who will be fighting against IS in Raqqa will then be a major discussion point. Turkey and its affiliates cannot reach Raqqa physically at this moment and would have to pass through the Kurdish region. Due to these forces’ hostility toward the Kurds, it is more likely that they will fight against the Kurds instead. IS could take this opportunity to attack the Kurds and their allies, who would in turn protect themselves from IS in the south and Turkey-backed FSA groups in the north. Turkey works toward making this probable scenario a reality.

The groups Turkey describes as the "moderate opposition" are no different from Jabhat al-Nusra or IS. The Sultan Murat Brigade is composed of Turkmens who are trained in Turkey, and the group's spokesperson has made several anti-Kurdish statements. There are also other groups such as Nureddin Zengi Brigade that are radical Islamists at their core. Turkey and the United States are making a historic mistake and taking a major risk when they describe these groups as moderate and present them as an alternative to IS.

Kurds in Syria argue that Turkey supports these radical fundamentalist groups and fuels the war. The Turkish government, however, views the opening of a Kurdish corridor in northern Syria as a threat to its national security. Many Turks believe that the developments in Syria will have consequences for the millions of Kurds inside Turkey. For this reason, they do not want Kurdish people to gain status in Syria. However, Kurds have always argued that such an occurrence would pose no threat to Turkey.

A critical round of the Syrian conflict has just begun. Turkey, which has been floundering in Syria since 2011, has retaken its place on the stage alongside the US-led coalition forces, Russia, the FSA, IS, the Kurds, the Damascus regime and several regional powers. Will Turkey attack the Kurds and their allies from the area it recently took over? How will the United States respond? We will soon find out, because Turkey will not be satisfied with control over a small town and some villages.

Yildirim suggested that Turkey is in agreement with the United States regarding the YPG. US Vice President Joe Biden announced that the YPG should retreat to the eastern shores of the Euphrates River. In response, the YPG declared that it would not retreat from the area to the west of the Euphrates.

Currently, Kurdish forces and their allies are advancing toward al-Bab to the southwest of Manbij. From there, they plan to open a corridor to the Kurdish town of Afrin. If this plan is implemented, will we witness the bloody results of a regional Kurdish-Turkish conflict?

Turkey’s biggest problem is its Kurdish phobia. Because of it, Turkey takes meaningless and unnecessary steps and spreads its enmity toward the Kurdish people in the region. As a result, the political and military conflict between the Kurds and Turkey is gaining momentum in Turkey and Syria.

The majority of the Kurds think that the Turkish state chooses to treat the Kurdish people as its enemy, as Syria and the Middle East are being reshaped. Will the Kurds’ defiance mean the continuation of the chaos and violence in the region? Unfortunately, this seems to be the case at the moment.